Garrard County falls by one point in bruising battle 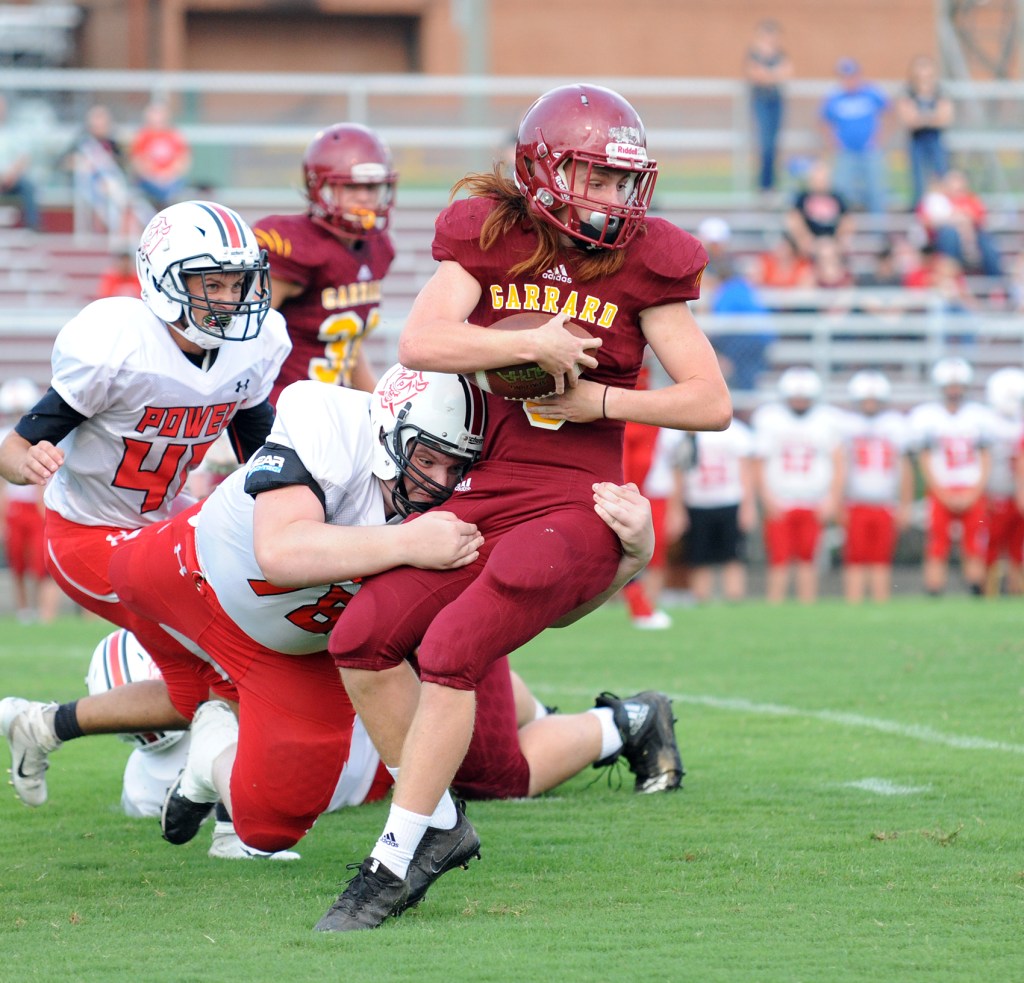 LANCASTER — It was a bruising game from the start to open the season.

Late in the fourth quarter, Christian Hansford ran in a one-yard touchdown to put the Golden Lions within a point. But a false start and failed two-point conversion left Garrard behind by a point.

“I thought we fought hard. We’ve got a long way to go,” head coach Jerry Perry said. “Made a bonehead play on the two-point conversion down there, should’ve just done what we had been doing. I really thought the lead would walk in because they were really tired. We were really tired but I thought they were more tired. Then we jumped offsides because the cadence was different. That was a bonehead play on my part, then the second play was even worse. This one is on me.”

But Perry’s team fought — Powell County came out as the better team, scoring the first 13 points of the game, but the Golden Lions fought back to take a 14-13 lead in the third quarter behind two touchdown runs from David Pennington.

Pennington finished the game with 18 runs for 131 yards and a score.

Perry said that he liked how his team fought — both teams were tired in the second half but the Golden Lions were the ones who looked the most conditioned.

“We’ve got to continue to work on our one-back set, it’s just not there right now,” Perry said. “We’ve got to be able to do that. That helps get some guys off of the field. We know wishbone is our best set right now. We’re going to continue to work on that one-back set so we can try to spare some guys. In our bone set, they’re all out there. Then they turn around and play defense.”

Powell County took the lead in the fourth quarter to set up what could have been Garrard’s game winning drive. The Golden Lions wore down the Pirates’ defense with just three minutes left on the clock.

Hansford pounded in the touchdown from one yard out, and Perry chose a different play call at the goal line, one with a different cadence.

For the two-point conversion, Perry again opted for a different call — quarterback Brice Burkhart faked a handoff to the right, rolled left and met a Pirates’ defense that did not fall for the fake.

It was a learning experience, and Perry said that his team’s effort was quality.

“We still would’ve had to stop them, but those are on me. The kids played hard,” Perry said. “We know what we are. It’s just going to take some time to get there. The schedule we play, it may not look very pretty. We’ve just got to keep playing, keep getting after it. I do like some parts we have, our conditioning level has to get better. But I did see a few things that are encouraging, the effort was encouraging, they were worn out. They gave effort, we were down 13-0, struggling.”

“I tried telling people, Powell County has a really good football team,” he said. “And they did. They only had five seniors last year. That makes a huge difference. They’re a whole lot bigger and faster. I thought our guys accounted for themselves very well. We’re just going to work from there, do what we do.”

Perry liked the way his running backs performed but noted that Jacob Hacker (15 carries, 87 yards) is nursing an injury.

“They ran hard, they’re going to run hard,” Perry said. “Hacker is going to have to get healthy, we might not play him at all next week. We thought he was doing a little better but ended up hurting himself again, so we might have to shut him down and get some younger backs in there that didn’t see action tonight. We’ve got some sophomores that we’ll throw out there and see what they can do. I thought he looked good in the wishbone, I think he’s a really good downhill runner. He’s a good zone runner too, we just didn’t run zone basically because of his injury. I didn’t want him to do any drastic cutting. We’ll see what happens from here.”