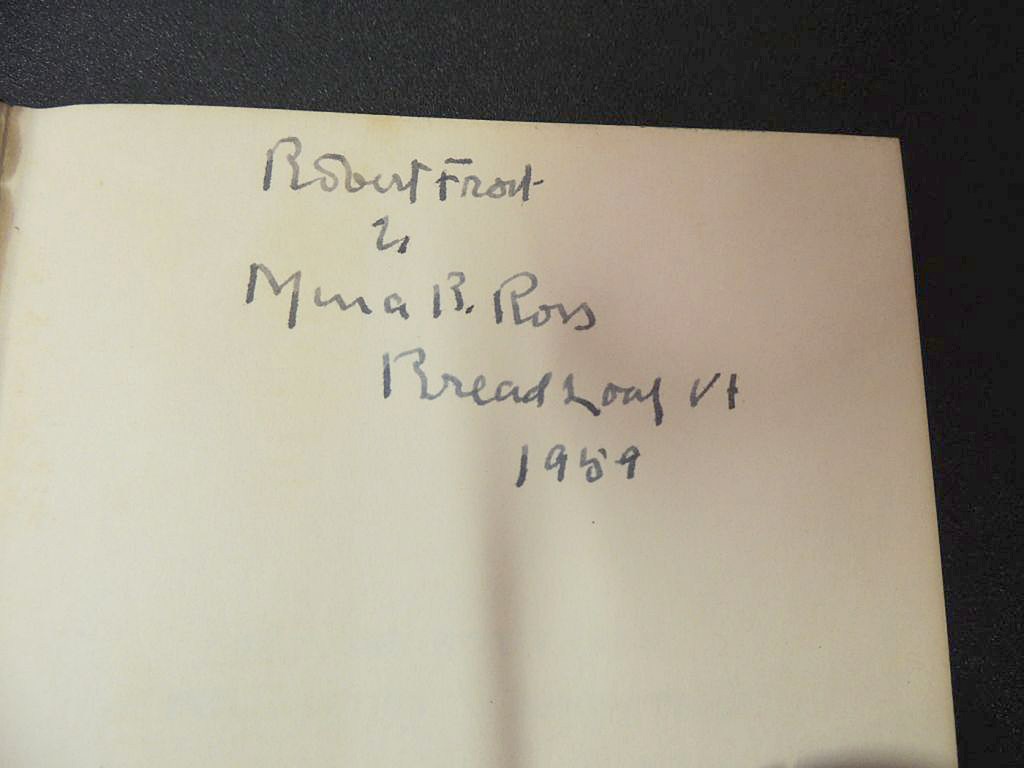 Question: Hi Jerry. My wife and I celebrated our 50th wedding anniversary a few weeks ago. Being both of us are bibliophiles; I firmly believe this is what brought us together. In the beginning we were as poor as church mice, but longed to have great American books. We were given this copy of “The Road Not Taken” by Robert Frost as a wedding gift from a family friend, who had attended classes for her English degree at Bread Loaf School of English 11 years before.

She met Mr. Frost on several occasions and attended one of his poetry lectures. This is where this book came from.

We collect books for their content but I’m always interested in what signed copies sell for. Can you tell us if this has any value?

Thank you for your time. We travel so much, that we miss coming in your store, but we satisfy ourselves to see you on TV and in the paper. Take care and again thanks.

For those who don’t know, Bread Loaf School of English outside of Middlebury, Vermont, is surrounded by the green forests of Vermont and is within sight of Bread Loaf Mountain. The forest and the mountain was willed to the Middlebury College by a former student in 1915. The school itself was created in 1919 to help graduate students obtain an education in the fields of English and American literature, public speaking and creative writing. The first session was held in 1920.

Robert Frost joined the faculty in 1921 and stayed for the next 42 years. It’s as though he never really left. The school owns, maintains and supports The Robert Frost Farm, which is very close to the campus. It’s a very elite and literary campus. 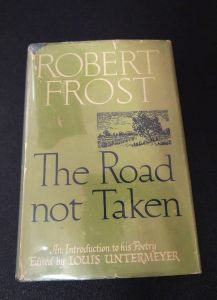 You have fourth edition of Robert Frost’s “The Road Not Taken.” It’s sound, clean, intact and has a great and clear signature. The dust jacket, which is fortunately still intact, has some chips to the edges and some light fading to the spine. Hey, at least it’s there. It’s an important book, socially and culturally. It’s a book that serves as an introduction, not only to his poetry, but the life, world and style of Frost.

Mr. Frost is, in my opinion, one of America’s most important and perennial poets. I looked in various sources and was pleasantly surprised at what I found. I’m being realistic, I think, that in an upper retail environment, at an upscale antiquarian book store, show or gallery, in this condition your book would be priced at about $700. Frankly, I saw some fourth editions and signed copies like yours priced well over $1,000. It’s a wonderful book. Thank you for sharing it.