The Scoop: Where Have All the Bugs Gone? 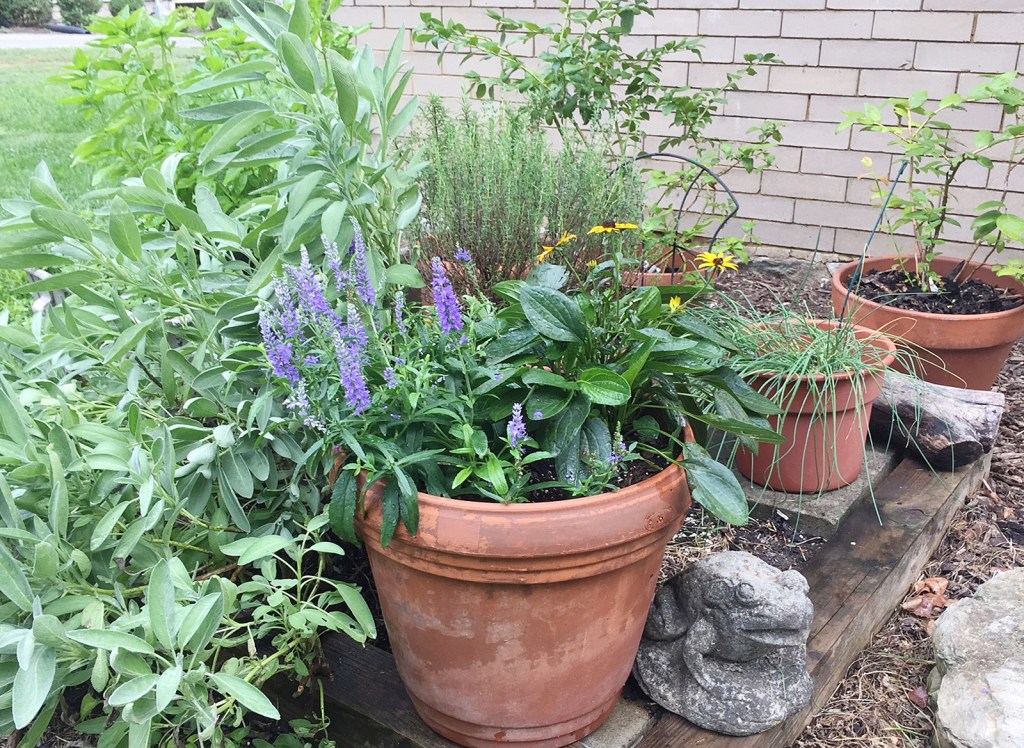 Photo by Susan Jonas. The only sunny corner in this garden is doing its part to help pollinators with a grouping of pots containing native flowers and herbs. When the herbs were blooming last month this small container garden was abuzz with insects. Two potted blueberry bushes serve both pollinators and the birds that beat the gardener to the berries.

Some of us have been around long enough to remember a world with far more flying insects than we see now. I had almost forgotten that car windshields and grills were once splattered with insects after a drive, especially at night. How long has it been, if ever, since you had to scrape a layer of squashed bugs off your windshield to see clearly? It used to be a regular occurrence. Do you remember when screen doors in summer were covered with moths and outdoor lights were circled by clouds of insects? Where have they gone?

It seems Edsel cars aren’t the only things missing from our roads today. Biologists call it the windshield phenomenon. Clean windshields are a symptom of a vanishing population. Scientists are increasingly alarmed by the decline of flying insects. We’re all aware of the pretty ones, the butterflies, bees, and lightning bugs, but what about all the others? We don’t pay much attention to the moths, hover flies, beetles, and countless other bugs that flitter through our summers. The same threats causing a decline in monarch butterflies and bees are taking a heavy toll on the rest of the insect world.

There’s no single cause, but intensive agriculture has altered the landscape dramatically in recent years. Just look at those endless fields of corn and soybeans stretching to the horizon with no other living thing in sight. The use of genetically modified plants and pesticides has insured that the fields are no place for a bug. Gone from those farms are the miles of fence rows that once harbored the wildflowers, native grasses, and weeds insects need for food and shelter. Development, widespread use of pesticides, and acres of pavement play a role, too. 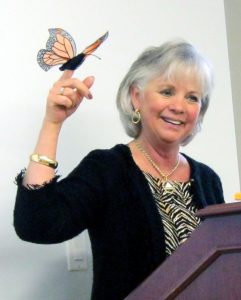 Photo submitted
As a former president of the Garden Club of Kentucky and now State Parks Chair for GCKY, Joanna Kirby has traveled over 18,000 miles across Kentucky since 2013 giving presentations about monarch butterflies to civic groups, clubs, schools, extension offices, libraries, and parks. She is assisted by Linda Porter, Butterfly and Pollinator Chair.

If you’ve been swatting mosquitoes or battling fruit flies in the kitchen this summer, fewer bugs might sound appealing, but be careful what you wish for. Insects are such a crucial part of the food chain that without them there would be no higher forms of life. They pollinate our food crops and provide nourishment for birds, bats, fish, and many other creatures.

Thankfully, there are people like our own Joanna Kirby and Linda Porter stepping up to help. A former president of the Garden Club of Danville, Joanna became president of the Garden Club of Kentucky in 2013. She chose as her President’s Project “Monarch Waystations – Helping Hands Across Kentucky.” At that time in Kentucky there were only 36 Monarch Waystations registered with Monarch Watch through the University of Kansas. Linda Porter was asked to be Joanna’s Monarch Waystation Chair and the two swung into action to up that number. They have traveled the state handing out over 5,000 brochures provided by Wild Ones Native Plant Society, and giving presentations to clubs, civic groups, schools, extension offices, libraries, and parks.

Joanna met with the State Parks Commissioner and State Naturalist to arrange a partnership between the Garden Club of Kentucky and the park system. The project began with five parks. Cumberland Falls was the first. As more parks and local garden clubs heard about the program, they asked to participate. In many cases, local garden clubs volunteered to sponsor the gardens. Seventeen of Kentucky’s 49 state parks now have certified Monarch Waystations. You can see them nearby at Old Ft. Harrod, Perryville Battlefield, Waveland in Lexington, the William Whitley House outside Stanford, Fort Boonesboro, and Lincoln Homestead State Park near Springfield.

As Joanna and Linda visited the parks, they evaluated the sites for sun exposure, location, size, and the enthusiasm needed to plan, plant, and maintain these gardens. The two women assembled packets to distribute to park staff with information on nectar plants, milkweeds (the only thing monarch caterpillars can eat), garden maintenance, and sources for pesticide-free plants.

Representing the Garden Club of Kentucky, Joanna also worked with state park personnel to create a children’s menu placemat picturing the “Life Cycle of the Monarch.” These menus are being used at all Kentucky state parks. For its efforts to save monarchs, The Garden Club of Kentucky was presented with The National Garden Club’s Award of Excellence in 2015, a significant honor and a first for Kentucky. As of July, 2018, the new figure is an impressive 582 waystations in the Commonwealth. Thank you Joanna and Linda!

In the face of disturb ing news about insect loss, we can take heart that tens of thousands of everyday people are engaged in managing their own little piece of earth in a better way. It only takes a small effort for gardeners to make a difference. Habitat restoration can be as simple as a pesticide-free yard with trees, shrubs, and flowers that bloom throughout the year. Unlike mammals, insects don’t require vast tracts of land. Even a few pots blooming with herbs and native flowers will help.