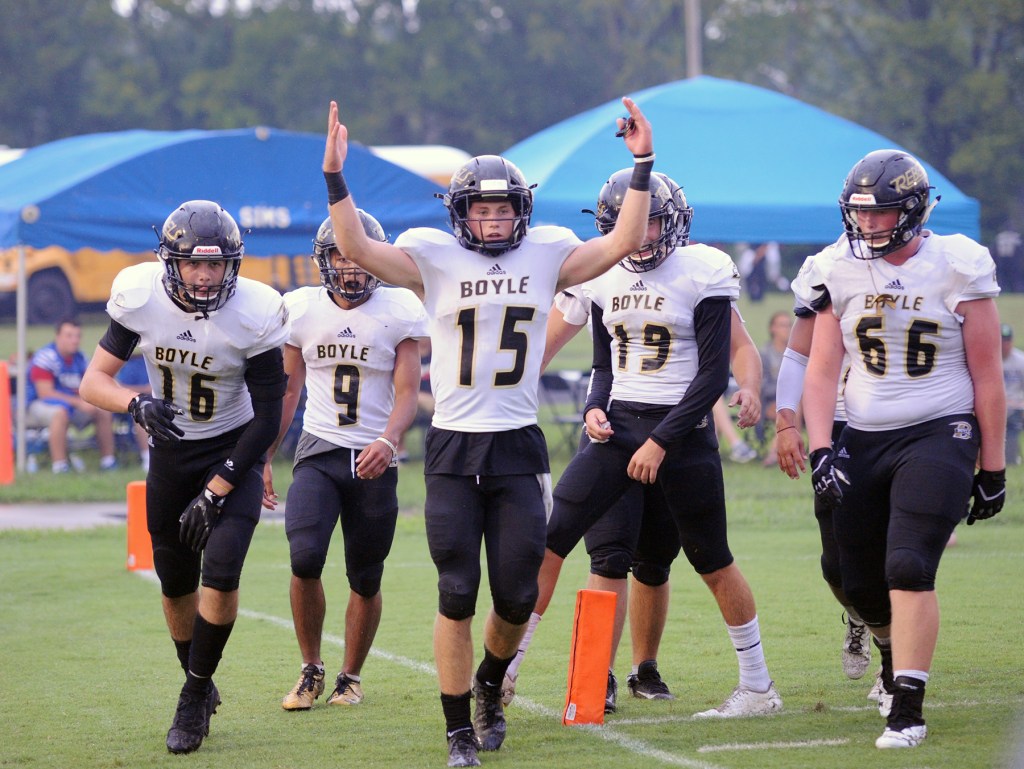 HARRODSBURG — Louisville Ballard was a huge challenge for Boyle County in its season-opening game on Saturday.

Ballard, a top-10 program in Class 6A, entered Saturday’s bowl game in Mercer County with a talented squad and size to match. But the Rebels proved up to the task.

The defending 3A state champion Rebels won 35-21, thanks to three first-half touchdowns from Landen Bartleson and a strong day on both sides of the ball from game-MVP Reese Smith.

But the game was too close for comfort, according to Boyle head coach Chuck Smith.

“They were a really nice football team and we knew they would be, they had a lot of good athletes on the field,” coach Smith said. “I was really proud of our guys for finding a way to win that game.

It was a roaring start for the Rebels: Junior linebacker Drew Baker — playing his first game in more than a year due to injury — intercepted a pass on the second play of the game.

Four plays later, Bartleson hit paydirt with his first rushing touchdown of the game to put the Rebels ahead 7-0.

But Ballard was quick to respond with a 24-yard touchdown run by Michael Lofton on the very next drive.

Ballard quarterback Austin Carr was intercepted a second time later in the quarter, when Reese Smith dove and tipped the ball up in the air and teammate Isaac Hardwick snatched it out of the air.

On the very next play, Bartleson added his second touchdown of the game, a 73-yard dash through the Bruins’ defense. Boyle led 14-7 after one quarter.

“We were just trying to feel out our team, coming into this game,” junior wide receiver and team captain Reiley Colwick said. “Because first game, you don’t really know what you’ve got. We wanted to be able to execute our offense and defense. Our defense wasn’t as good as we were expecting. Reese stepped up and made the difference. I’m just glad we survived.”

Ballard responded quickly again, with Carr scoring on a quarterback sneak to tie the game.

Chris Duffy would flip the field on the ensuing kickoff, putting Boyle County on the Ballard 30 to start its next drive.

Bartleson added his third touchdown of the game later in the quarter, putting the Rebels back on top 21-14. He finished the first half with six carries for 87 yards and three touchdowns.

Reese Smith would get an interception after Carr threw a jump ball in the middle of the field, aimed at wideout Rashod Bishop.

“I thought that Landen played pretty good early in the game, he got fatigued late in the game and he’s got to be in better shape than that,” coach Smith said. “I thought Reese was just outstanding, he made the big plays in big situations and that’s what great players do. The thing about it is, everybody’s going to figure it out after awhile and they’re going to put two or three guys on him. Somebody else is going to have to step up and play.”

That someone might be Grant Hotchkiss, who scored the fourth Boyle touchdown on the day thanks to a strike from quarterback Reed Lanter.

On the ensuing kickoff, Ballard failed to recover a well-placed kickoff from Jackson Smith, and the Rebels took over. There was a scuffle at the end of the play that brought teams and coaches together, but no players were thrown out and personal foul penalties on each team offset.

Ballard’s defense held, and the Bruins would add a touchdown before halftime to make the score 28-21. Ezarious Roller earned Boyle’s fourth interception of the day as the Bruins were driving at the end of the half.

It was a strong offensive performance in the first 24 minutes of the season for Boyle with a relatively inexperienced offensive line.

“Their D-I players were more on the defensive side. Our plan was to get off the ball, not let them contact us on the line because that was their gameplan coming in and we knew that,” Colwick said. “On the defensive side, their receiver No. 18 (Elijah Downing), we practiced jump balls against him, tackling in open space and stopping screens. It was a lot to learn.”

Downing, a 3-star receiver who has six Division-I scholarship offers, finished the game with just five catches for 40 yards. Colwick was tasked with guarding him when the Rebels switched to their nickel package on defense

“I like when people doubt me so I can prove myself, earn their respect,” Colwick said. “They see me at 5-foot-6 against 6-foot-5, they think it’s automatic. I like the competition.”

Rain poured onto the field in Harrodsburg for the duration of halftime, which impacted both teams, particularly on offense.

But the Rebels were more prepared in the second half on defense, limiting Ballard to less than 25 yards of total offense in the final 24 minutes.

“I think we got a lot more in sync, we just all came together,” senior defensive lineman Aaron Hatter said. “We realized, ‘if we step it up, that’s it. They can’t run the ball, they can’t pass if we’re sacking. There’s nothing that they’ll be able to do.’ I think that was our mindset coming into the second half, not let them get anything.”

Coach Smith said he and his staff made defensive adjustments in the second half out of necessity to step up play on that side of the ball.

“We did, but we had to do some things different to be able to step up,” he said. “We just couldn’t play up there and that’s what we like to do. I was really disappointed, to be honest, with the defensive front and with the offensive line. We’ve got to have better play. I’m happy that we won the game but I know we’ve got to play better in order to achieve our goals.”

As the defense stepped up, the offense took care of business.

Lanter would somehow find Reese Smith on a slant for the final score of the game and the only score of the second half: Lanter hit a tiny window behind the Ballard linebacker and just ahead of the cornerback, with his receiver doing the rest. Reese Smith snatched the ball away from his defender, split the two defenders and out-raced the Ballard defense to the end zone for a 50-yard touchdown.

That was the “good” for Boyle County, but Hatter said he and his teammates have to find a way to cut out the “bad” through this title-defending season.

“It was a really, really big first game for us, a 6A school,” Hatter said. “It’s a really big test. They expected to come down here and get a fight, and they got a fight. It was a huge game, the D-line, we’ve got people back from last year who know what they’re doing and that gives us a huge advantage. We’re still going to have to work on it, there was some ugly stuff we did, some good stuff we did. We’ve just got to find a way to make it good every single time.”