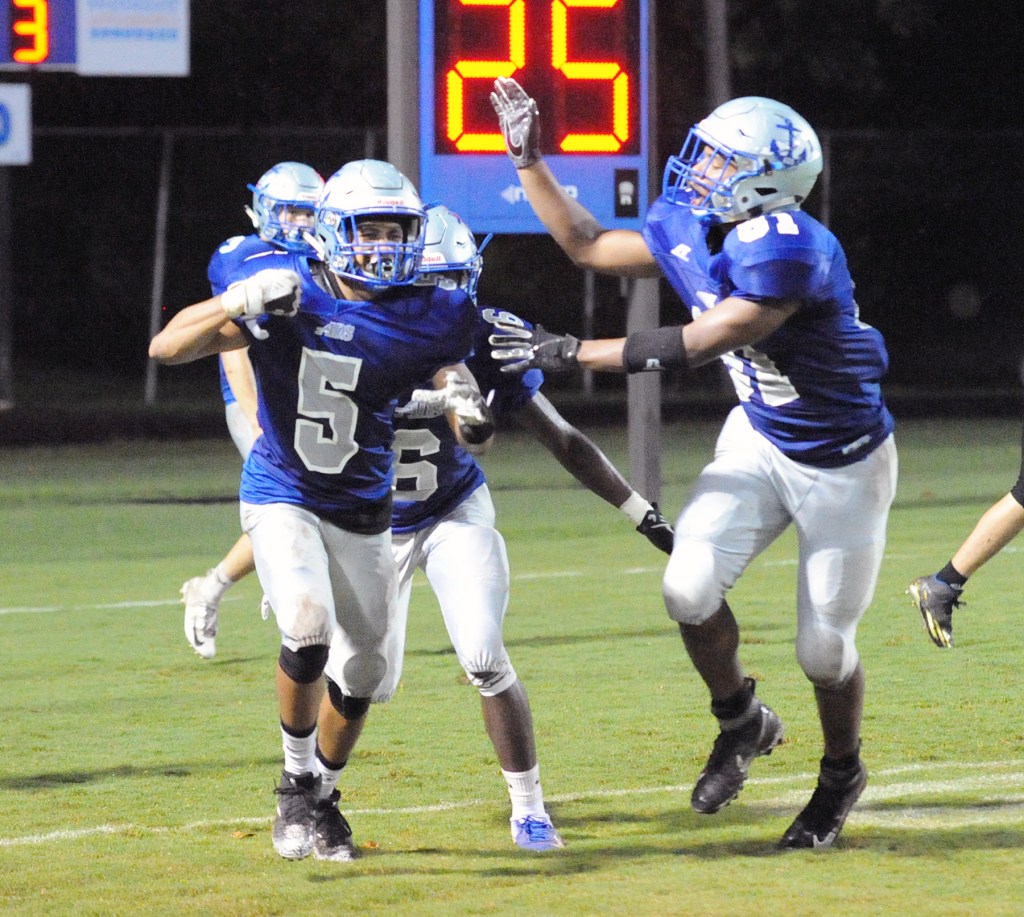 Danville’s win streak is up to 16.

The Admirals took care of business in their home Bob Allen Pigskin Classic, dismantling Woodford County 40-0 in their opening game of the season.

But it wasn’t the cleanest start for the Ads, who didn’t score in the opening 12 minutes. Danville found its footing in the second and third quarters thanks to an increased focus on the ground game and the return of No. 23 — Kishon Bartleson.

“I didn’t start the first quarter because I was late for practice this morning, but I knew when I came in in the second quarter, I had to step up and be a leader,” Bartleson said. “It was fun, getting back on the field and playing with my brothers.”

Bartleson’s impact was noticeable, and he and fellow senior Zach Thornton pulled the Admirals forward to a 13-0 lead at halftime after a sluggish first half.

Thornton scored on a 42-yard run through the middle of the Yellow Jackets’ defense at the beginning of the second quarter. Bartleson followed with a nine-yard touchdown run of his own at the end of the half.

Bartleson added an interception to his tally in the second quarter and finished as game MVP, scoring three touchdowns to go with his forced turnover.

But Bartleson didn’t have the most unique play of the second quarter. That title belongs to offensive lineman Pierce Haines.

On what might be the weirdest play of the season, Thornton threw a pass deep over the middle to a receiver, and the ball hit a Woodford player square in the helmet. The ball flew back in the air, landing right in Haines’ hands.

“I literally looked up, saw it and said ‘please God, let me catch this,’” Haines said. “The first thing that went through my mind when I caught it was, ‘this is going to be so great.’ I caught it, I looked down and thought ‘that’s not possible.’”

Haines was actually Danville’s leading receiver at halftime after the nine-yard gain.

“Those are fun plays, that gets the linemen awful excited,” Haines said. “It was a good play, I think we got a first down out of it and continued to drive. Those are always good, too.”

The Admirals showed they have multiple threats in the run game as well. Thornton, Bartleson and freshman Caleb Burns all finished with more than 50 yards rushing. The Ads had six players carry the ball at different points during the game.

“I think we’re just going to be finding our identity early in the season,” Danville. We’ve got a lot of guys that are capable with the ball in their hands, and when you’ve got that, you don’t always get quality reps with one or two, you want to get a lot of guys reps in practice. I told our guys at halftime, ‘we’re not a Ferrari like we’ve been in the last three years.’ And that’s fine. We can still go out and wear teams down, use our size and strength to our advantage. Use our bodies, our depth at running back position to be able to pound people, get them worn down so in the second half, it gets a little easier.”

It certainly got easier for the Admirals in the second half.

Bartleson scored his second touchdown of the night — this time from eight yards away — on Danville’s first drive of the third quarter. Less than one minute later, Isaiah Miller scooped a fumbled pitch and scored from 17 yards away.

Bartleson capped his night with a three-yard touchdown run at the end of the third to put Danville ahead 33-0. He said that they knew going in what to expect from Woodford and that made for an easier second half.

After taking off the first quarter, he said he knew he could carry the load late into the game.

“After I got that breakaway, I knew I could get on a roll because I had my legs, they were still fresh,” Bartleson said.

As the game got out of reach for the Yellow Jackets, more Admirals started to prove their worth on the ground.

Miller had two carries for 46 yards. Burns had six carries for 64 yards. Darian Logan — who scored the final touchdown of the night for Danville — had three carries for 42 yards. Warren Griffin had five carries for 38 yards.

As a freshman, Burns looked good in his first time seeing varsity action.

“Caleb, he’s a very talented freshman and we knew that coming in,” Clevenger said. “We didn’t want to throw him to the wolves but we also want to bring him along because he’s got the talent to be able to play.”

Danville’s offensive line did what Clevenger expected, wearing on the Woodford defense as the game wore on. The offensive line also knew it needed to step up after a tough showing against Southwestern in a preseason scrimmage.

“As a line, we’ve grown up together, spent the last three years together,” Haines said. “Against Southwestern, coach pointed at the scoreboard and said that’s our fault. The only thing we can control is ourselves and we took that to heart this week in practice. We really stepped up and gutted up, decided to go hard.”

Clevenger agreed that the line took a step forward on Saturday.

After their blowout, Danville will put its 16-game win streak on the line against a team familiar with winning: Corbin. The Admirals will visit the 2017 3A state finalist this weekend.

“We know it’s a quality opponent, it’s going to be a really tough atmosphere,” Clevenger said. “We played in the bowl game last year in the first game and we saw what they were like as we were leaving. They’re really going to pack the house and it’s going to be loud and crazy. We’re going to have to be able to withstand that emotion early and I’d say it will be a pretty hard-hitting, physical football game.”