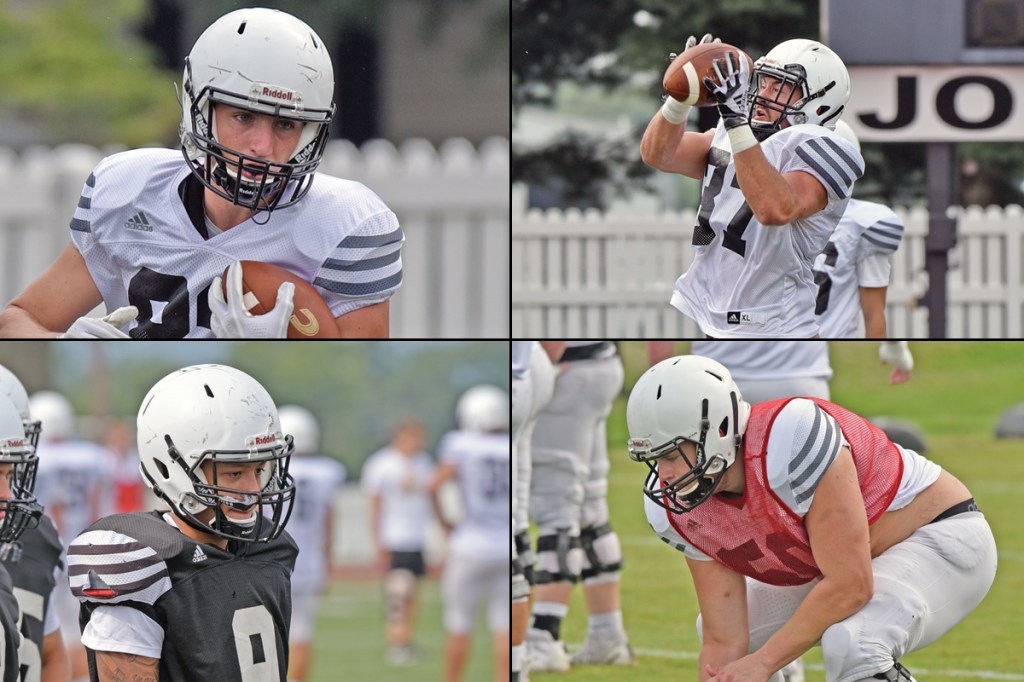 Juniors Mack Cox, Hagen Ellis and Drew Yeager have welcomed incoming freshman Kaden Gervacio into the Colonels’ football family and are eager to build on their first two years at the college level.

There has been a strong run of Rebels to Centre — Cox, Ellis and Yeager had some familiar faces to look to when they arrived on campus.

“Our freshman year, we had Trey (Yeager) and Lloyd (Hall) here too, so they kind of showed us the ropes, brought us in,” Ellis said. “We’ve been able to do what they did with us with Kaden.”

Gervacio said having them has been a big help in his first year.

“It’s not to bad so far,” he said. “I came out with a kind of crazy haircut, I’m 0-for-2 on camp haircuts … We’ve been separated a lot, mostly because I play defense and they’re all on offense. But they help me with getting around campus, they’ve welcomed me into the Centre football family.”

The trio of juniors have always had a strong bond — Cox and Ellis roomed with each other freshman year — and said having friends has made it an easier transition to the college level.

“It’s just been nice having these guys here, I always have people who I can go to and talk with and hang out with,” Yeager said. “They actually lived together freshman year so it was nice to have them, go over there and hang out with people who I feel comfortable around. It was nice getting to know my roommate freshman year, and just having my older brother here really helped a lot, too.”

“There’s that level of awkwardness that first week when you’re trying to get to know people,” Ellis added. “It was nice because us three could always be together and have our own group messages and stuff, making sure we are where we’re supposed to be.”

That’s what they’re doing for Gervacio, and Gervacio gets to bring something to the table that the three juniors never achieved in high school: A state championship ring.

Centre is similar to Boyle County in that the two schools share a championship mentality: The three juniors have a strong 17-3 record in their first two seasons with the Colonels, but they expect to be better. Each year they’ve finished one game away from the Southern Athletic Association title.

Coming from Boyle’s winning culture to Centre hasn’t been much of a shock for the former Rebels.

“I think the easiest thing with that is just having that championship mentality,” Ellis said. “Just coming in as freshmen, there’s guys coming in from high schools that are winning three or four games a year and they kind of have to adjust to the way we do things, that expectation to win. Coming from Boyle, we already had that. Every game out you’re supposed to win. Coming here, keeping that mindset, I think that was a really easy transition for us, where other people had to make that adjustments.”

Cox agreed, saying that a 9-1 record might be good for most colleges, but Centre expects more.

The adjustment to college was also unique for all four athletes — they all played multiple sports in high school and now are exclusively football players.

But they said that’s not a bad thing, especially with Centre’s expectations academically.

“Being a college sport, it just takes up so much time,” Yeager said. “Even in the spring, we’re still doing stuff almost every day. It’s like you’re doing another sport but it’s not as demanding, I guess. That other sport you’re in season. It’s just grinding.”

Cox said academics are grueling in the offseason.

“It’s demanding, but the workload academically at Centre, as soon as you get out of football you’re like, ‘thank goodness, I’ve got to focus on that now,’” he said. “If I had been going straight into basketball like I used to, I’d just get so far behind. We do so much football in the offseason, it’s football year round. But it’s good, it’s good to focus on other things collegiately as well, academics and socially.”

Gervacio said that he’s nervous and excited for his freshman year — he knows the challenges he faces, athletically and academically, at Centre.

“It makes me a little bit nervous, my plate, things like that,” he said. “But the guys I have around me, and especially these three right here, they’ll help me through it and mentor me through it, time management, things like that. But growing up around here, you know that Centre is a rigorous academic school.”

There are no Danville High School graduates on the Centre roster, but the juniors would welcome any student-athletes that help the team.

“I think if it’s a player that can help us, sure,” Cox said. “Once you get to college, a lot of high school rivalries fade away. Our best friend, (Yeager’s) roommate is from Lexington Catholic. That fades, you’re more focused on the Centre goal. You just want to win. I had Zach Dampier on an overnight and I would love for him to come here. Anybody that can help us out, it doesn’t really matter.”

“When you’re in high school, you have those big Danville, Lex Cath. rivalries. But once you get out of it, you have that mutual respect,” Ellis said. “We know those dudes can play. They can come here and help us out.”

The coaches at Centre — led by head coach Andy Frye — promote that championship mentality and attract players with that same mentality. Yeager said that’s similar to the way it was at Boyle County.

“I’d say the coaching isn’t that much different,” Yeager said. “At Boyle we focused on fundamentals so much, that’s exactly how it is here. They had the same kind of coaching style, you have people like Centre coach (Carter) Conley and Boyle coach (Jeff) Hester that are both awesome but crazy at the same time. I just think the coaching is very similar in a way. It’s all about fundamentals, get your nose in the dirt, drive your feet kind of football.”

Cox agreed, saying that the coaches at Boyle and Centre are all in it for building character on and off of the field.

“Our coaches in high school were very influential on who we are as people, players, students, athletes,” Cox said. “Coach Hester, we saw him every day in the weight room. We learned so much from him just trying to teach us about life. He was preparing us for college and beyond, football and life.

“It’s really the same here, they’re trying to make us the best men that they can. High school prepared us for college, now college is preparing us for life outside of college. I think a good similarity is that they care about us as more than just players. That’s good, from 15 to 24 years old, it’s always good to have the people who have your best interests in mind, not just being a good football player. They care about who you are on and off of the field.”

So, what’s the expectation this year on the field for the Colonels?

“This year just has that sense that it’s truly our team,” Ellis said. “The past two years, we knew the juniors and seniors and we were friends with certain ones, but others we didn’t know that well. This year, we are the juniors, we know the seniors and they’re our best friends, too. It’s just like that, it’s more of a sense that it’s our team now.

“We’ve really realized we need to win all 10. Freshman year, we were 8-2 and we got beat in the last game by Berry. That knocked us out. Then last year, we lost to Berry in week three or four and didn’t get a bid, even though we thought we might be able to sneak a bid at 9-1. This year we realize there’s no room for error, take it one game at a time.”