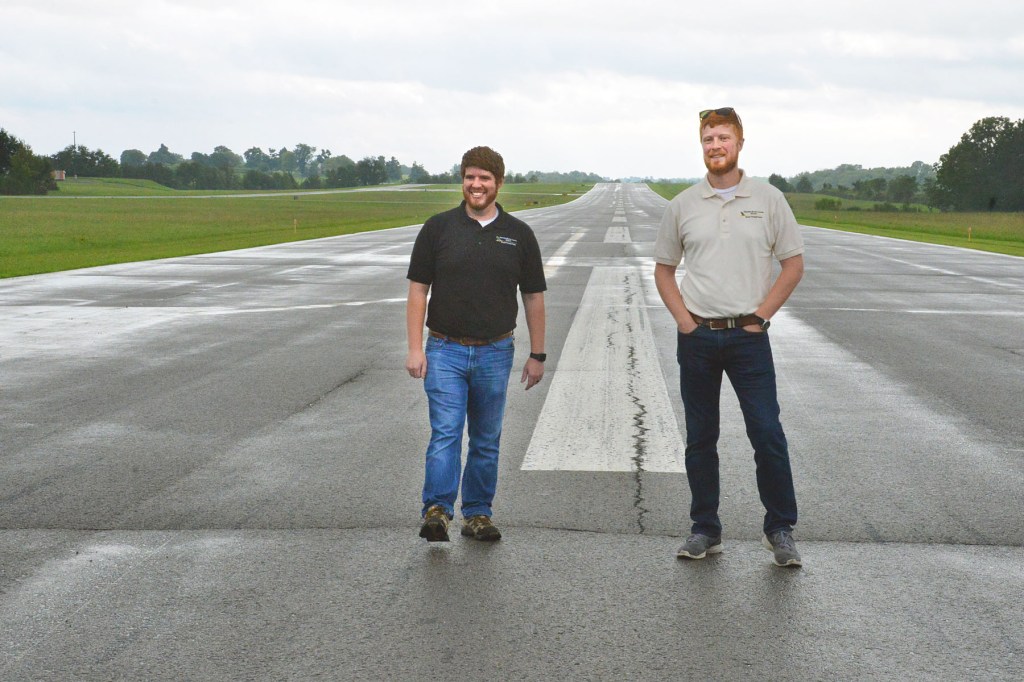 Photos by Robin Hart Christian Barker, left, and his younger brother Nick Barker, work together at the Danville-Boyle County Airport.

Two young men from Danville who are brothers and co-workers help make the Danville-Boyle County Airport’s Stuart Powell Field an enjoyable and efficient place for travelers to land their planes.

Christian Barker, 26, has been the airport manager since 2017 while his brother, Nick, 24, has been the operations manager for about a year. However, both started working there a couple of years earlier. 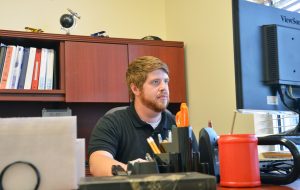 Christian Barker, airport manager at Stuart Powell Field, is in charge of running the business end of the airport.

Christian is in charge of what he jokingly calls “the boring stuff” of record-keeping, invoicing and other business dealings for the board of directors. But he can easily watch the runway action from the large picture window in his office.

Nick works mostly outside of the building with the pilots and is in charge of the runways, taxiways and the parking ramp.

The field of aviation is very rigorous and the men carefully inspect everything on their daily checklist every morning, including runway systems, equipment and fuel quality.

When the weather is pleasant and the airport is busy with planes and jets constantly taking off and landing, both men guide planes to the parking ramp, fill up gas tanks, pull planes into hangers, answer the phone and make arrangements for rental cars and other transportation for guests who land at the airport.

“We try to treat everybody like they’re coming in on a $7 million jet. We try to give them the best 5-star experience that we can,” Christian said.

“We give everybody the red carpet treatment,” Nick added.

The local airport is customer service-oriented, he said. Even though both men have degrees in aviation maintenance technology, professional aeronomic and business management, the brothers believe it’s important for them to give extra attention to their customers, which could mean taking bottled water out to the pilots or placing a clean rug down on the runway before travelers climb back up on their jet.

“We try to go the extra mile for everybody,” Christian said. 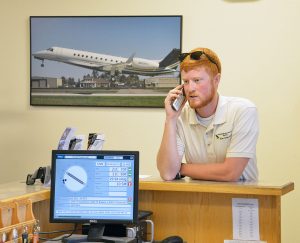 Nick Barker, operations manager, talks with a potential customer one day at the office at the Danville Boyle County Airport.

Many local pilots fly out of Junction City in their small planes for weekend trips, just as some people hop in their cars for short getaways. Several routinely fly to Florida, Gatlinburg and Branson, Missouri, Nick said.

But there is a trend shifting to more corporate jets flying into Boyle County. Christian said businesses such as First Southern Bank, Honeywell, Kimbell, Centre College, TransNav, Wilderness Trail Distillery and Lafayette Engineering all use the airport or have clients who do.

Nick said the attraction for corporate jet flights is that a lot of time is saved because travelers don’t have to go through checkpoints, wait through baggage claim or stand in lines.

“It’s a convenience thing. They just jump on the plane and go.” He said, “The corporate side is flourishing.”

The brothers grew up loving anything involving aviation because their dad, Scott Barker, loves it too. They said they played with model airplanes and watched real planes take off and land from outside the fence at Stuart Powell Field.

Their father now has his pilot’s license and Christian and Nick are close to getting theirs.

When the brothers were talking about the responsibilities they have and the business of the airport, Nick said, “It’s nice we can cover for each other.”

Christian said they never intended to work together. “It just happened that way. But I don’t trust anyone more than I do Nick.”

Even airports have self-service gas tanks.

Nick Barker, operations manager at Stuart Powell Field checks the quality of jet fuel every morning. He tests the fuel for contaminents such as water.