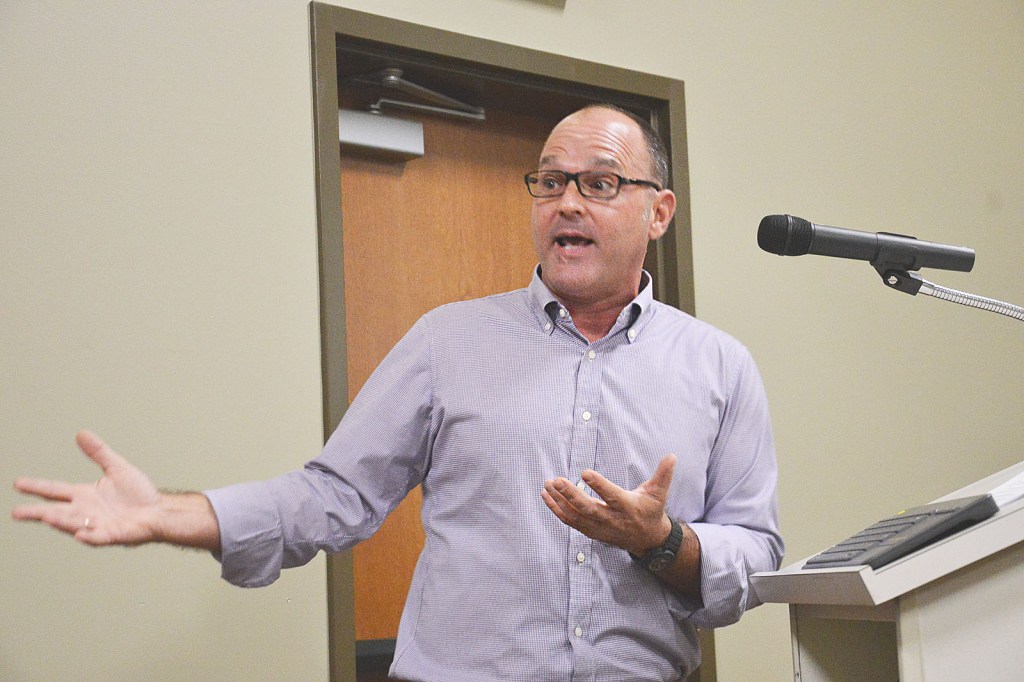 Photos by Robin Hart/robin.hart@amnews.com Andy Wilkson speaks to the the public during Monday night's Board of Adjustments special called meeting for a conditional use permit for Seeing Hearts Transitional Home Inc.

A transitional living facility for male inmates who have completed their jail or prison sentence was denied a conditional use permit to locate in West Danville at a special called Danville-Boyle County Board of Adjustments meeting Monday night. 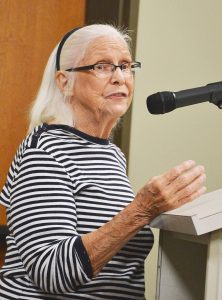 Andy Wilkinson’s proposed Seeing Hearts Transition Home applied for the permit in order for the facility to be located in a large building at the corner of Sycamore and Beech streets.

The original public hearing was to be Aug. 16, but was rescheduled for Monday evening so more people could attend and voice their opinions for or against the home.

The city hall commission room was filled to capacity Monday. Planning and Zoning Director Steve Hunter explained to the group the area is zoned General Residential- small lot (GR-B) and listed what types of conditional use permits could be allowed there.

A “transitional home” is a unique term and didn’t exactly fit the city’s somewhat outdated zoning ordinances, he said.

An attorney for Seeing Hearts, Winfield Frankel, said the facility wouldn’t overburden any public services and wouldn’t be detrimental to the public safety and welfare. The facility would house 15 men at the most. Frankel said Wilkinson felt once the building was renovated, it would be a bright spot in the neighborhood.

Wilkinson gave an emotional plea to allow the facility to be located in west Danville.

He talked about his own history of being in prison and the hardships he faced as he tried to adjust to being back into society. A significant number of inmates “are not evil monsters,” he said. Many of them “are not lost causes … By golly, they deserve our help.”

Wilkinson said the project would “invest heavily” in the Beech Street property.

“We’re going to make this building that sits empty and dilapidated, we’re going to shine it up like a diamond,” he said. “… Don’t stand in opposition of us. Come alongside us.”

Those who spoke in favor of the project explained how they know inmates who are released carry a stigma of being an ex-con, making it nearly impossible to find employment.

Boyle County Jailer Barry Harmon said he has seen people change for the better after being released and the transitional home is a plan to help them get back on their feet.

Dave Harding, a pastor in the area said he too spent time in prison — 20 years in fact. He told the crowd to visit with the jailer and chaplain and talk to some prisoners. “Look into their eyes to see their humanity.”

James Durham spoke about how, as a real estate broker, he thinks the building’s improvements would increase the neighborhood’s property values because hundreds of thousands of dollars would be invested into it.

“Today, it is offensively bad. The fact that it hasn’t been condemned is questionable of what’s happened on the city side,” Durham said. “I’ve been in the building and I know how bad it is … The building’s been for sale for a long time and we bought if for nothing.”

Those speaking against the project included Bethel Wade, who said she was born and raised in the neighborhood and would rather see something to benefit the residents of the area and not have a home for ex-cons. “Take it somewhere else.”

Ann Clay Rush said, “I do not want to see this here. I do not want to walk outside and be worried that someone may or may not relapse. I have no problem with the ministry … I think everybody deserves a second chance. But I absolutely do not want a bunch of ex-convicts standing next to my house when I’m trying to raise my 10-year-old son. There are a lot of children that live in this neighborhood and this is not the place for that.” 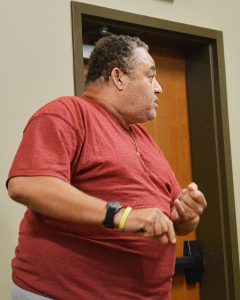 Henry Overstreet, who lives in the neighborhood, tells the board of adjustments he knows most convicts only go to church and take classes while serving jail time just to get out of their cell, because he spent 29 years in the penitentuary hiimself.

Angelia Lewis lives in the west Danville neighborhood and has been a nurse in correctional facilities for about 11 years. She said that on her job, “I hear conversations as they’re about to be set free. I hear them all the time. I believe in rehabilitation. I feel like I’m a progressive thinker and I love Christ and I love ministry too. But I do not want this down the street from my children because, unfortunately, I do live in their (inmates’) minds because I have to.”

After all of the public comments, board chair Virgie Johnson asked Wilkinson if he would consider adding another condition to the permit not allowing sex offenders live there, and he agreed.

Board member Donna Fairchild said apparently he bought the building “dirt cheap,” but she asked what other reason he had for wanting the facility in a residential neighborhood.

“The vision was there,” Wilkinson answered.

Fairchild also questioned his ability to adequately fund the project. Wilkinson said there were no investors, only supporters. He expected their funds to finance the home.

Johnson asked about who would oversee the the home and its residents, especially if Wilkinson wasn’t there himself. The answer was that it would be “peer-driving accountability.”

Wilkinson said counseling would not be required for residents, but there would be weekly support meetings. He also said he would be willing to discuss making violent-crime offenders ineligible to live in the facility. He said he wanted the home to be in the city limits to make it easier for residents to walk to their jobs and appointments if necessary, and that being in a neighborhood would be a good step for them to be accepted back into society.

After a nearly two-and-a-half hour meeting, board member Mike Lay made a motion to deny the permit because the project didn’t meet the requirements as set forth in the zoning ordinances.

Board chair Virgie Johnson did not cast a vote. Board members David Anderson, Dan Campbell, Donna Fairchild and Mike Lay voted in favor of the motion to deny. Board members Miles Preston and Jesse Purdy opposed the denial. Therefore the denial was passed by a vote of 4-2.