Mural is a no-go: AHB formally denies approval of mural for lack of ‘historical ambiance’ 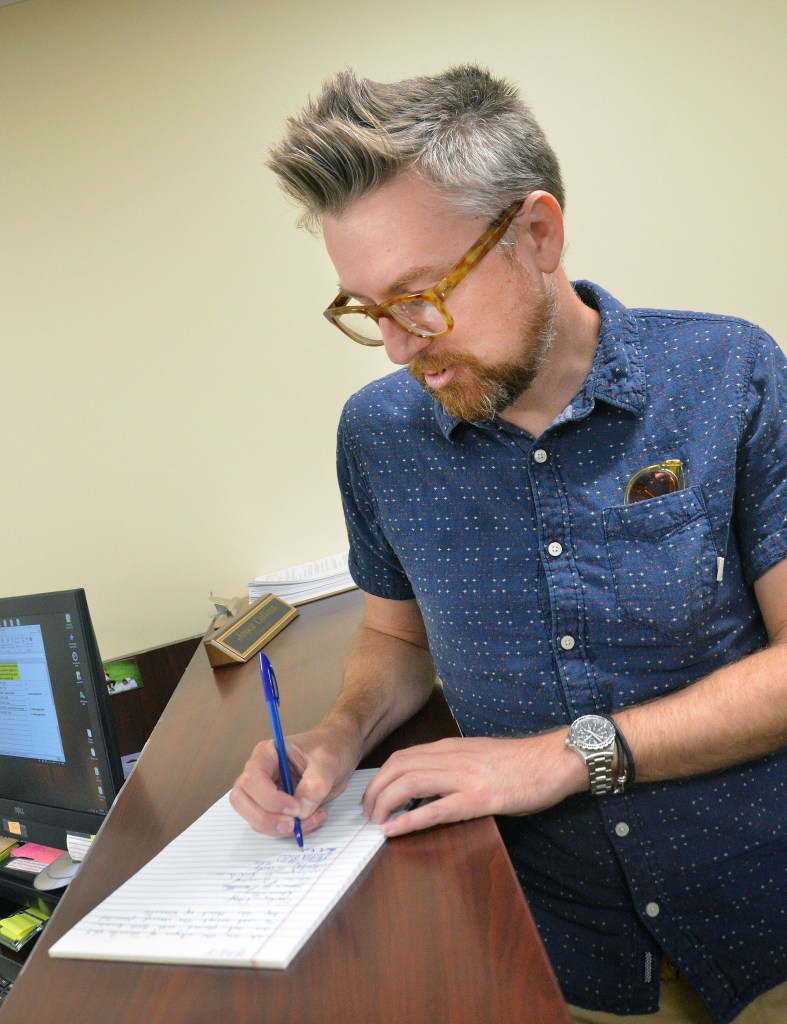 (Robin Hart photo) Mark Wilhelm signs a letter stating his displeasure with the Architectural Heritage Board's decision to not allow a contemporary mural to be installed on a building in downtown Danville's historic district.

A proposed large, contemporary and colorful mural will not be allowed on the side of a Third Street building in Danville’s Historic Overlay District, following a second meeting of the Architectural Heritage Board concerning the project.

Wednesday’s meeting was held to finish official business from last week’s meeting when a motion to deny or approve a certificate of approval (COA) for the mural design on the side of Raggs and Derby Shoppe building died for lack of a second, according to Director of Codes Enforcement Bridgette Lester. She said the city attorney advised the board to meet again and either approve or deny the proposal, and give reasons if it was denied.

Board chair Tom Tye said the process was “new legal grounds on how do we proceed.”

At the special meeting, the board allowed Heart of Danville Executive Director Nick Wade and Heart board member Kate Snyder to restate their request for a COA be granted for its mural project.

During a powerpoint presentation, Snyder said, “There is no conflict between historic preservation and modern contemporary art. Those two things work beautifully together.” She stressed that the mural design met all of the guidelines concerning public art.

Wade said the board had been made aware of the Heart’s intention to have the mural painted by nationally-known mural artist Andee Rudloff if the location was approved. Because the location was approved but the design request died for lack of board support last week, “This is setting a very dangerous precedence for the future of public art and projects in the historic district. If we are denied today, the precedence is set that any project that comes before you could be denied after the project has been started.

“Furthermore, the decision from last Wednesday was made from a place of personal artistic preference. We are aware that this is a new process, but this decision shows that the process is broken and must be fixed.”

Wade added, “We recognize that not everyone will love the design, but feel strongly that public opinion cannot be an arbitrator of public art content. Whether or not people like a mural is ultimately irrelevant because it’s entirely subjective.”

Board member Dana Dixon said the board has to represent all of the community and preserve the “ambience of history that people travel to see.”

Wade said Danville’s new branding identifies the city as being “Historically bold.” He said, “It’s time for us to step up and continue that tradition in the community.”

Dixon replied, “It’s also bold to resist trends that other communities have done.”

John Caywood who owns the building where the mural was approved spoke again in favor of the mural’s vibrant color and design. “It’s a vision of where we have been. It creates a vision of our future.”

When he finished speaking the room erupted with clapping and some “boos” were heard.

Board member Vaughn Frey wasted no time and immediately made a motion to deny the Heart’s mural because it wasn’t in compliance with the guidelines and “will diminish the area’s quality of the historic district.”

The motion was seconded by John Bowling and the COA was denied by a vote of 5 to 2, with Mary Girard and Melodie Quinn voting against the denial.

Following the meeting many people in the room booed loudly while a few clapped for the decision.

After the meeting, Wade said, “It’s not dead yet! We have options available, and you can bet we will explore all options before we let this project go. The public’s support has been incredible and we hope they continue to support us as we continue our fight.

“Today’s decision is incredibly disappointing. For a board that is supposed to make decisions for the betterment of our downtown historic district, it is a sad day when they cannot see the value that Andee’s mural would have. Any vibrant downtown today has public art of all varieties and styles.”

Late in the afternoon, Wade said the Heart had already submitted an appeal to the city commission. “We believe in this project and will defend it to local leaders until the end…We know we have a strong case for the appeal. Also, it was a disgrace to not let the public speak at today’s meeting, for or against, and they deserve that opportunity.”

Dixon said after the meeting that all of the examples of Rudloff’s work “that have been approved in other historic towns, none of those were in a historic district. That’s a fact.”

Many people congregated in the lobby at city hall and talked about how disappointed they were about the decision. Some went to the mayor’s office and signed a letter stating their their displeasure with the AHB’s decision.

Evelyn Page was the first to sign. She said she was absolutely disappointed that the mural won’t be allowed at that location. “I think we need some vibrance and some new and different things in downtown Danville in order to have more young people. We need to appeal to the younger generation. I don’t think we can just stay stagnant and say, ‘tradition, tradition, tradition.’ It drives me crazy.”

One resident who was pleased with the board’s decision was overheard after the meeting saying the mural would have “…looked like the side of the Partridge Family’s bus.”

Angela Allen was happy with the outcome. “I am thrilled with their decision. As anyone who has every requested approval for a business sign downtown, they can attest that this board is excruciatingly careful to be sure the historic flavor of downtown is preserved. I’m thrilled that they held to that for this particular mural. I want a mural downtown. I want a mural in that location. I want a mural that’s going to be representative of this community … I want something that is a bit more polished, a bit more historic and a whole lot less bold.”