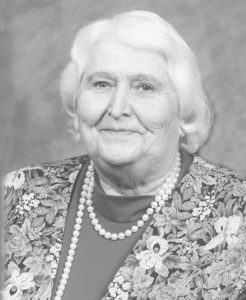 Rebecca (Becky) Mae Bruster Meyers, 92, of Danville, passed away on Friday, August 17, 2018. Becky was born September 2, 1925, to the late Howard, Sr and Susan Bruster in Ithaca, New York. She grew up in Ithaca, N.Y., and when she graduated from high school went to Baptist Bible Seminary, Johnson City, N.Y. (now known as Clark Summit University, Clark Summit, Pa.). Upon graduation she went to work for eight years at Baptist Mid-Missions, Cleveland, Ohio. In 1954 in Cleveland, Ohio, she married Clyde Roger Meyers of Cleveland. She had a family of four children, during which time she was active in her church as member of the youth committee, junior youth director, nursery coordinator, Vacation Bible School worker, coordinator and teacher of Neighborhood Bible Clubs. In 1972, she moved to Danville, Ky., and became a member of First Baptist Church (By-Pass). She was involved in the deaf ministry in Sunday School, Bible Club, Vacation Bible Schools, served on the offering committee, taught Reapers Sunday School Class. When she came to Danville, she joined the Newcomers Club and enjoyed friendships from that club throughout the years. She had many friends that she met through the Christian Women’s Club of Danville. She did daycare work for several years and made many lasting friendships. She had a greeting card ministry throughout her life.