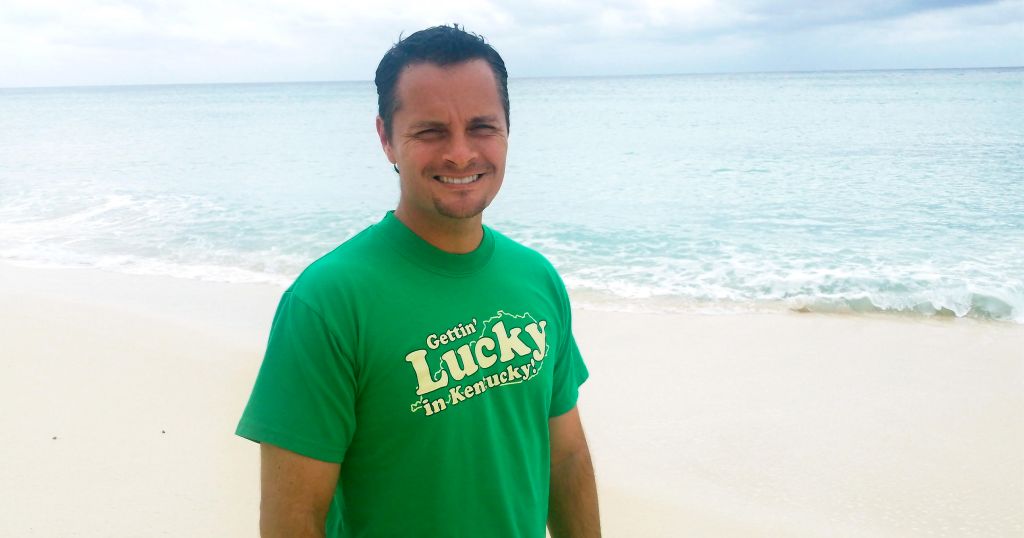 Photo contributed Lee Cruse, stands on the shores of a beach.

After just a phone call with Lee Cruse, it’s easy to see why he’s been a popular television personality for years. He will be appearing today and Saturday at Pioneer Playhouse to round out their season with his Kentucky All-Stars Comedy Tour — the troupe of winning comics from a competition he started out of his love of laughter.

A front man for WLEX news and host of a midday show on the same network, Lee’s face has been a familiar one in central Kentucky for years. I’ve never met him, yet felt like I already know him — I ask if he gets that a lot.

Comedy can also be weird, no matter how long you think you’ve been funny, and Lee found that out the hard way. He got lucky once, he says, with a shot at a national talk show in New York, in syndication from ‘94 to ’95. NBC flew him up to be a part of the panel on “Last Call,” the last show Brandon Tartikoff, former head of the network, created before he died.

“I guess I did OK for a 23-year-old kid who’d never been on a plane before, but I got rattled by the audience,” Lee says, and it was obvious they really weren’t on his side.

“It’s a bunch’a New Yorkers, so they already don’t like you.”

He made three appearances, and it wasn’t even stand-up. But that live audience, he says, was “a bunch of progressive communists. I was representing the right to them — but really the center, in my opinion. They’d attack you. They’re against you.”

Lee says he knew he wasn’t seasoned, then.

“All of my heroes, like Letterman and Leno, all those guys were stand-up first.” So he went to Louisville to some stand-up clubs and took it all in.

“I knew it was something I wanted to do, but — more importantly — I felt like I had to do it.” He had something to prove.

“I was doing stand-up before television. I did radio first, but got into stand-up back when dinosaurs roamed, in my early 20s.”

He was 24 when he first hit the stage. And he’s never left.

Lee and Scott Wilson, the regular emcee at Comedy Off Broadway, started the All-Stars competition probably 20 years ago, he says. At first, they just awarded prizes for the top three winners, but it’s grown into a touring gang.

“We thought, let’s just take this on the road,” Lee says. Last year, they performed at Renfro Valley. They’ve been to the Leeds Center for the Arts in Winchester, to Somerset and “the big ag performing center extravaganza in Casey County” (Central Kentucky Ag/Expo Center), just to name a few.

The comedians win this opportunity after being chosen by a celebrity panel of judges and by audiences. Part of the prize package is the chance to do a professional set at a venue.

Scott, Lee’s lifelong friend, will come to emcee — or “take the bullet” as it’s known in the industry. He not only introduces each comic, but he has a set right up front to warm up the crowd.

“That’s what he does every night (at Comedy Off Broadway) anyway,” Lee says.

Two of the top three winning comics will be with him — David Williams, who he describes as the “blue collar tour-type” comedian, and Garrett Wilson “who Millenials will love.” It will be a perfect mix, he says. Lee will close the show as the headliner.

“And this will be odd for me and Scott,” Lee says, explaining that he’s known Garrett, who is Scott’s son, since he was 4 years old. And now, he’s on stage.

“But Scott and I step out of it during the preliminaries; we don’t have any control over who the judges and the audiences choose, so he earned it.”

Giving hard-working comics a platform is important to him. “Why? I’ve got two answers to that. One, I see myself in those guys. The other answer is: I’m like Ike Turner and they’re like Tina. I’m pimping them out.”

I’ve never seen Lee do stand-up, but tell him he’s been described as both a “clean” comic and a “somewhat racy, naughty” comic. Which is right?

“Maybe both. I don’t curse very much at all. I do prefer to be clean where that’s concerned …” Lee says, but he’ll push it as far as ideas go — “or as far as being politically correct.”

He has jokes about Kentucky, relationships, being married — average life stuff, he says. “I’m observational and do more stories. But it’s a hodge-podge, not just story after story. Some quick-fire.”

Does he ever worry about audience sensitivity?

“We think about it. One of the things about the opening acts — they have clear-cut rules to follow. But I can’t control it.” Plus, there’s the fact that Lee says “I just don’t care anymore.”

“It’s just that I deal with it every day in TV. The most innocuous thing I’ve said has created a controversy before,” he says, with viewers writing letters to the station “and saying they want me fired.”

So, then your ratings go up?

“Well, the people who hate you are actually watching the most,” Lee says.

I ask Lee — why so much support for Pioneer Playhouse?

“I love what they’re doing, love the mission,” he says. “To be perfectly honest, the first thing I remember (in this business) is interviewing the Colonel (Eben C. Henson, playhouse founder). He was so magnanimous and generous to me. I’m in showbiz and I understand what they’re trying to do. I want to help them.”

Not to mention, he says — “think about the legends who have been on that stage. Lee Majors? For crying out loud, Jim Varney …”

As far as being the season-closer at the theater, Lee says, “I think a stand-up comedy show is the way they should do it. Glad they came up with the idea a few years ago. I love theater, period. But comedy — it’s like dessert. You’ve had a full season of all these entrées and all these presentations of salad and meat. Now you get to laugh non-stop. We’re like the banana split.”

As long as everyone has a good time, he’ll feel like it’s a success. “I hope audiences walk away proud that we have a lot of talent in the state,” he says. “Get off your butt, get off the couch and come out and laugh with us.”