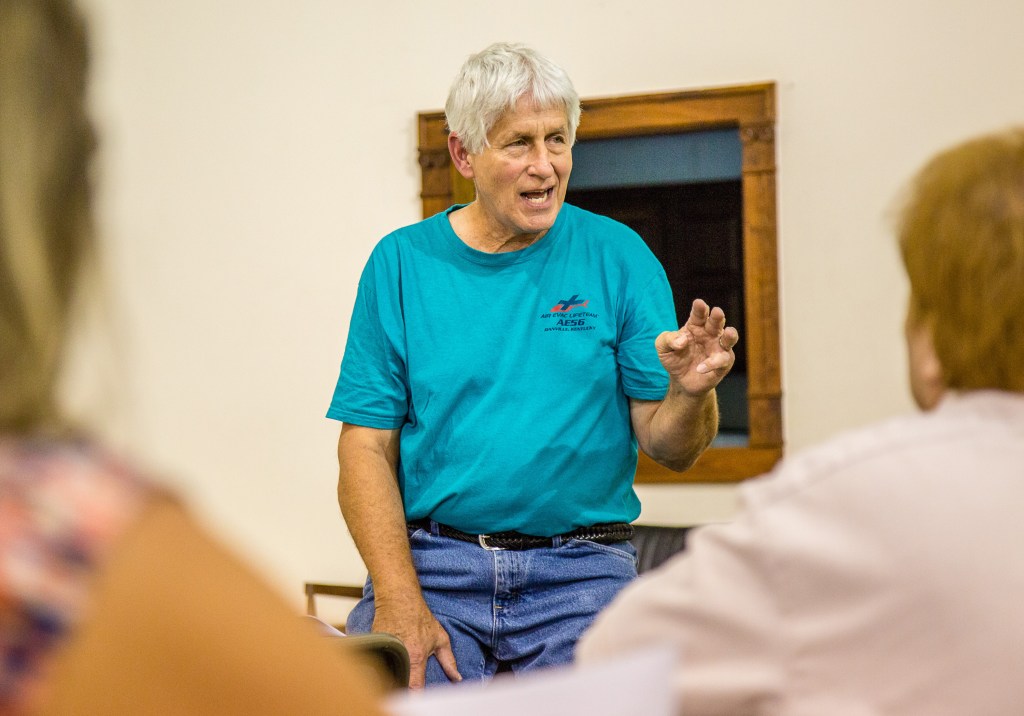 Ben Kleppinger/ben.kleppinger@amnews.com Tom Ellis talks about his reasons for opposing an increase in the Boyle County School District's property taxes during a meeting in Mitchellsburg Thursday.

A group of western Boyle residents is collecting signatures of those opposed to increasing the county school district’s property tax rate.

“They’re bleeding us dry,” said Deb Arnold, one of 11 who met at the Mitchellsburg Baptist Family Life Center Thursday. Arnold said many in the area live on fixed incomes and can’t afford to pay more on their property taxes. “There’s not going to be anything left.”

The Boyle County Board of Education has advertised for a public hearing on Aug. 30 to consider increasing its property tax rate from 70.4 cents per $100 of assessed value to as much as 74.6 cents. For someone with a $100,000 home, that would mean their annual property tax bill for the school district would go from $704 to $746.

The authority to set the district’s property tax rate rests with the members of the Board of Education, said David Morris, finance officer for the schools. The board could choose 74.6 cents, which would represent a 4-percent increase in revenue for the school district. Or it could opt for a smaller increase or take the “compensating rate,” which would keep revenues relatively flat, Morris explained. 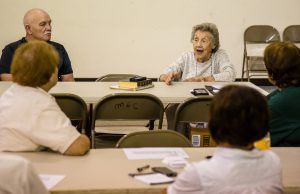 At the Aug. 30 meeting, “the options will be given to them as far as whatever they want to do,” Morris said.

Board member Ruth Ann Elliott attended Thursday’s meeting of those opposed to an increase. She told the Boyle residents in attendance that the best thing they can do if they don’t want an increase is to contact the board member who represents them and tell them as much. Asked if the petition could have an impact as well, Elliott wasn’t sure — “we’ve never gotten anything like this before,” she said.

Tom Ellis, another in the group organizing the petition, said the same core group of Boyle residents was behind a successful effort to gather hundreds of signatures on a petition against closure of the Mitchellsburg Convenience Center.

Ellis said he will be speaking with Superintendent Mike LaFavers about the proposed increase and “I will be a spur under his saddle on an issue like this.”

Ellis and others at the meeting said they want to see the district “tighten its belt” rather than increase taxes. They voiced displeasure that the district is building a $34 million middle school and questioned whether the district is really spending enough of the money it collects on student instruction.

Arnold said back when the district passed a “nickel tax” to fund the new school, Superintendent LaFavers told the public the increase would mean it would be a while until the district had to raise taxes again.

“I guess his definition of ‘a while’ is different than ours,” she said.

The district passed the nickel tax in July 2015, giving it more local revenue and access to a state match that helped greatly increase its bonding capacity for new capital projects such as the middle school.

LaFavers said in June 2015 that the district was stuck in a cycle of always needing a 4-percent revenue increase — the maximum allowed without possibility of a voter recall.

“We’d gotten into this business plan where, legally, 4 percent was all we could do, for more than a decade. That business plan is not the best for children, because you can’t really fix your schools thoroughly, and it’s not the best for taxpayers because you’re having to re-tax every single year,” LaFavers said at the time. “… The nickel tax brings in state equalization money. That state equalization money allows us to pay for those renovations out of a separate pot of money, called bonding potential. Because of that, the board can consider not having to raise taxes every year.”

After Thursday’s meeting in Mitchellsburg, board member Elliott said she had been given a handout by LaFavers about the reasons for the proposed increase. Elliott wouldn’t allow a reporter to copy the document, but it cited a loss of $33 million in the assessed value of personal property in the district due to the departure of industries such as Meggitt and Caterpillar.

The public hearing is scheduled for 6 p.m. Aug. 30 in the Boyle County High School library. But those gathered in Mitchellsburg Thursday said they hope to have so many people in attendance to speak against the increase that fire codes will necessitate a move to the school cafeteria.

Asked if she was in favor of the tax-rate proposal, Elliott said, “I can’t support that much of an increase.”

The Boyle County Board of Education will hold a public hearing at 6 p.m. on Aug. 30 to consider increasing its real and personal property tax rates from 70.4 cents to as much as 74.6 cents per $100 of assessed value. The maximum increase would bring in an estimated $219,000 in additional revenue for the school district.