A new conductor is being welcomed by the Danville Children’s Choir, and the group will have a special meeting Monday in order for singers to meet her. The meeting is also for any area children, in grades third through 12th, interested in joining to come check the group out, too.

Emily Roberts will begin to head up the group. She is a musician, teacher and performer from central Kentucky.

“Emily’s lifelong love of choral music began as a member of the Danville Children’s Choir, where she sang for over 10 years under Bruce Richardson,” says Barbara Hall, who heads up Danville sings, the umbrella for many local choir groups. “This and her private piano study played a crucial role in her decision to pursue music education, providing knowledge and experiences she still draws on to this day.”

Hall says Roberts taught seven years at the Lexington Christian Academy in all grade levels, and directed the intermediate, junior high choirs and the full orchestra program. She obtained her degree from Transylvania University, where she studied piano, voice and conducting, and completed her Masters in Choral Conducting at Ohio State University.

Roberts has also sung with Sounding Joy and the Summer Singers here in Danville, as well as several other Lexington groups.

In July, Hall spoke of how there had been a decline in local singers in the group, and they are hoping this changes. 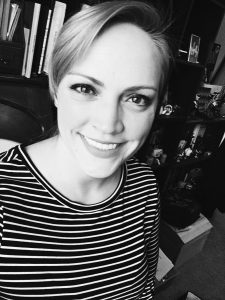 Hall says every child responds to music, and the music gives back to their lives by engaging their hearts, minds and bodies. And, she says — it’s a way for them to express themselves, and a great educational and fun experience for kids.

The choir dates back to 1990, originally started by Richardson. The choir has many former members who have gone on to study music curriculum in college, such as its new incoming leader, Roberts.

The choir takes trips and tours over the course of the years, and has had several competition wins over the last five years. The group has performed with the Lexington Philharmonic Orchestra and American Boychoir from Princeton, New Jersey.

Hall says taking into consideration the stats — only 1 in 5 children nationally are able to sing in a choir — this opportunity is inexpensive, fun and challenging. She says bringing music into a child’s life, like joining a choir, is academically enriching and musically rewarding. Research also shows, she says, singing in choirs has “remarkably broad positive impacts on both adults and children,” and that research shows children who sing have improved self-confidence, social behavior, reading and spatial reasoning, and are most likely to be team-oriented.

The choir’s first practice will be Sept. 10.

The other member choirs of Danville Sings also will be starting their fall terms with open rehearsals to welcome new, potential singers. Sounding Joy women’s choir, in its 13th season,  will begin 7 p.. Sept. 13 in room 114 of Grant Hall in the Norton Center. Resonance men’s choir, in its third season, will begin 7 p.m. Sept. 10 in the choir room of First Christian Church. Both are led by Barbara hall.

An open meeting for the Danville Children’s Choir will be 7 p.m. Monday at Lexington Avenue Baptist Church. Interested new and returning singers are welcome. The first rehearsal will be 7 p.m. Sept. 10, and will continue every Monday at the church.