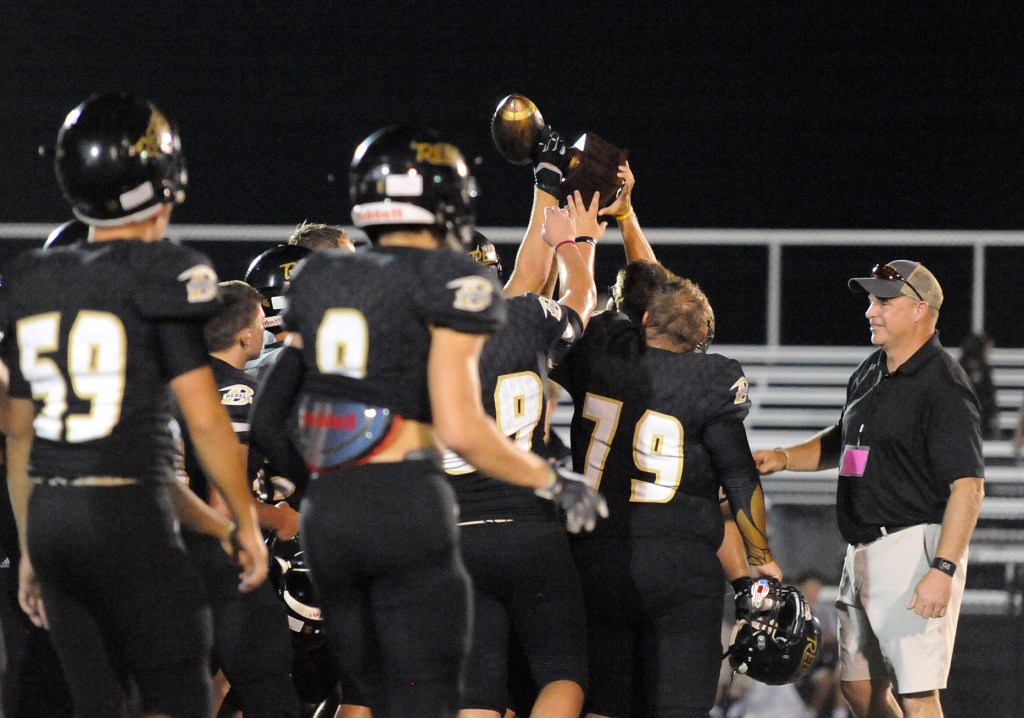 Boyle County was on a mission to start Saturday’s game against Franklin County.

6A Ballard, but head coach Chuck Smith said he still sees plenty of room for growth.

“My gut feeling is that I didn’t really feel like we did a good job at stopping the run from a defensive standpoint,” he said. “I still think we have to work on getting after them on the offensive line a bit better, we’ve got to get more yards rushing the football. Our passing game seems to be working pretty good, I’ve seen more guys catching the ball besides Reese (Smith), which is good.”

Boyle jumped out to an early 14-0 lead after blocking a punt on the Flyers’ first drive and then scoring a one-play touchdown, Reed Lanter to Reese Smith, on its own first drive.

Finding more playmakers will be particularly important after the Rebels lost Grant Hotchkiss for the season with a shoulder injury. Reiley Colwick stepped up with four catches for 46 yards, something that Lanter said was a point in practice.

“Coach Smith highlighted a few things this week, he wanted us to fire off of the ball, handle the ball better, not turn it over,” Lanter said. “Marquise Kinley has played pretty good, we’ve moved him into the backfield a little bit just to get him the ball more because he’s just so fast. We didn’t get the ball to Reiley enough last week but we did a better job of that this week.”

Linebacker Ezarious Roller — who finished with nine tackles and a tackle for loss — said he saw an improvement from his teammates on defense this week but they still need to be better.

“I think we improved from last week but we can always get better,” Roller said. “Everybody flew to the ball this week, we all read our reads better. We always have to improve to reach our ultimate goal like last year, a state championship. We’re always striving to do that.”

Coach Smith didn’t like how the Flyers were able to respond — they scored early in the second quarter to cut Boyle’s lead to 14-7 — and were able to put together drives after the Rebels’ strong opening quarter.

“For some reason, we were not in very good shape at all,” coach Smith said. “They hurried it up on us, we got tired and we weren’t set. That to me is really disappointing, and I don’t think the weather should’ve been a factor at all in that. We’ve just got to look at what is causing that and try to fix it.”

But Boyle was able to ground the Flyers later in the second quarter and enacted a running clock by the third quarter, finishing with a blowout win.

Now, the focus has shifted to Danville.

“It’ll be a big game, a really big environment,” Roller said. “Hopefully we’ll go out and get a win that we haven’t gotten in two years.”

Much of the Boyle team hasn’t seen a win against Danville, with just 10 seniors on the roster that were a part of the Rebels’ last win in the rivalry series, a 42-20 victory in 2015.

“It is a big game. They’ve beaten us the last two years, we haven’t had much luck with them,” coach Smith said. “I think they’ve got a really good football team again this year, their offensive line is really, really dominating, defensive line as well. We’re going to have our hands full, we’ll have to come out ready to go.”

Lanter said friendships have formed across the rivalry, but there won’t be any communication this week.

“Those are my boys but for this next week I’m not going to talk to them, just get ready and focused for this game,” he said.