McGuire shines for Danville in loss at Corbin 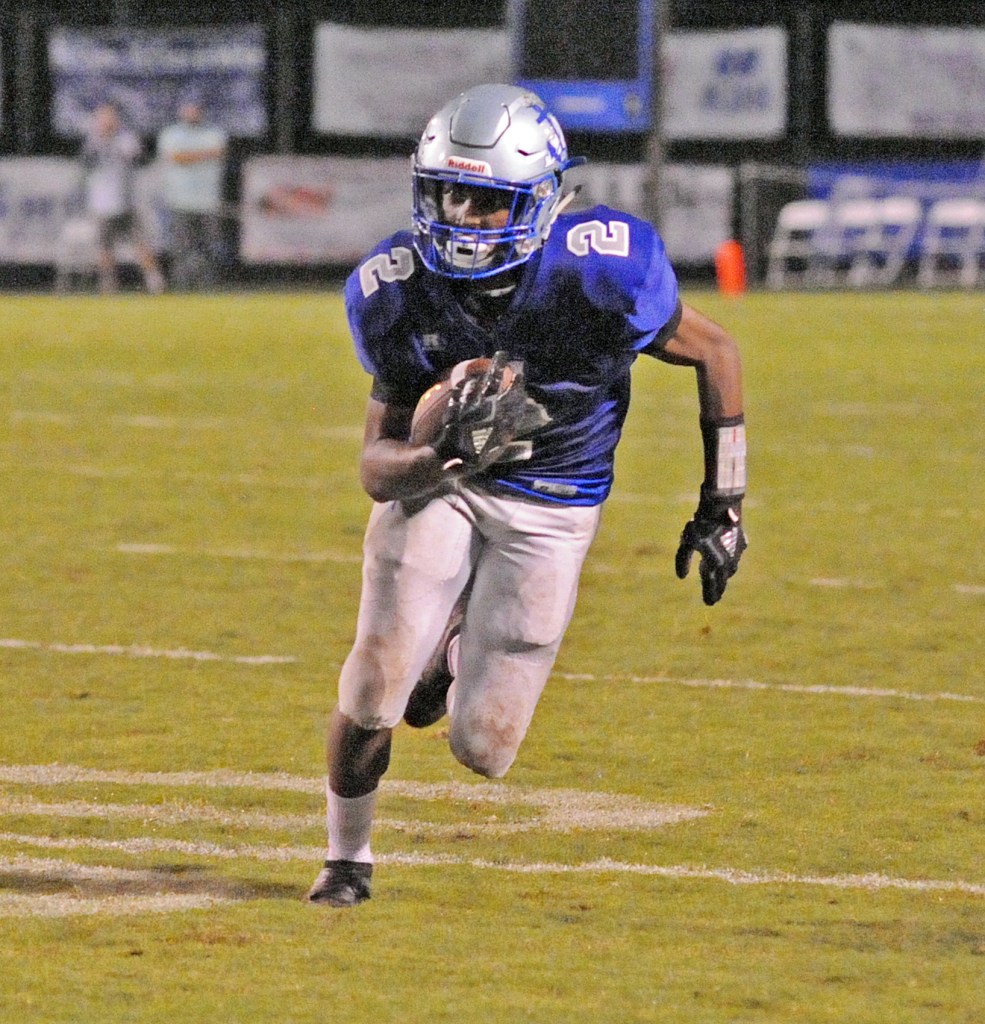 Brennen McGuire did his best to lift Danville to a win Saturday night against Corbin.

Despite losing to the Redhounds 28-10, the Danville senior showed that, despite the Admirals losing key players to graduation, they still have some playmakers.

And McGuire’s big night began early in the football game.

After an opening drive where Danville gained two first downs and just missed on what would have been a long touchdown pass, Corbin took over from their own 10 yard line.

The Redhounds then promptly drove to the Admiral 26 yard line on nine plays. It was the 10th play of the drive, however, when Corbin quarterback Chase Estep attempted to throw one in the back of the endzone. Instead of Estep’s throw finding his intended target, it found the waiting hands of McGuire, who ripped the ball out of the air, got his feet down in the endzone, then stepped out of bounds for a touchback.

The interception was McGuire’s first on the season and the second one in his past three games if you go back to last year’s Class 2A state championship game when he picked off a Mayfield pass in the second half.

After a Danville punt the ensuing drive, Corbin made their next drive pay off, going 54 yards in six plays as Noah Taylor plunged over the goal line for the first score of the game and a 7-0 Redhounds lead.

But thanks to McGuire, that seven point Corbin lead lasted all of five plays.

Danville marched to the Corbin 49 yard line and on second down and six the Admirals dialed up a double reverse and seconds later, McGuire raced through a slew of red jerseys to take it 49 yards for Danville’s first and only touchdown of the night.

“When Kishon Bartleson flipped the ball to me I just saw a big hole and I took off,” McGuire said. “I had to score. That was in my mind, to score.”

McGuire also showed off his speed the very next drive on defense. After the Redhounds took the kickoff to the 31 yard line, Estep again showed his athleticism, keeping the ball and racing up the middle of the field.

It appeared he would have an easy touchdown, outrunning the Admiral defensive backs — until McGuire chased him down from behind to tackle Estep at the three-yard line.

“I saw him split the middle and I said ‘oh my gosh’ and I kind of panicked but I just calmed myself down, I ran straight to him, and I knew I was fast enough to catch him,” McGuire said.

Unfortunately, though, Estep was able to run it in two plays later to give Corbin the lead 14-7 and start a theme for the night: Corbin big plays responding to Danville big plays.

The score remained 14-7 into halftime and Danville’s defense forced their first punt of the game on the first drive of the second half, taking the ball and momentum back and putting it into their own hands.

The Admirals responded, driving down the field to the Corbin 10 yard line, but the drive stalled and kicker Nathan Hazlett came out to attempt a 27 yard field goal.

Hazlett nailed the kick but also appeared to get hit by an oncoming Corbin defender — a collision that also sent holder Brady Morse down in a heap. The collision left the Danville coaches bewildered why there wasn’t a roughing the kicker penalty. Danville instead had to settle for the made field goal.

“The official’s explanation was that our guy tripped him into our holder,” Clevenger said. “It’s just the guy that tripped him was the kicker’s leg. Regardless, the explanation — it still should have been a foul. It is what it is, there were some questionable calls but that’s just part of the game sometimes.”

Two plays after Hazlett’s field goal, Estep found a wide open reciever, Devyn Sams, and delivered a beautiful pass right in his hands for a 54-yard touchdown pass to put Corbin up 21-10.

The score stayed 21-10 into the fourth where the Admirals, again, found themselves wondering about a call that went Corbin’s way.

With 9:40 left and Corbin hanging onto a 21-10 lead, a Redhounds receiver appeared to fumble the football, a ball that was picked up by Danville’s Chase McQueary, who began to take off the other way with it. However, the officials ruled the ball carrier down and Corbin kept possession, despite pleading from Danville coaches and players.

“They just said he was down,” Clevenger said. “They had blown it down and that was just one of those deals that the break didn’t bounce our way that time.”

Corbin kept possession of the ball, then iced the game away nearly seven minutes later as Estep delivered a pass to the corner of the endzone to Sams, who made his second touchdown catch of the game and put a cap on the scoring, giving Corbin a 28-10 win.

And despite the loss, the first one for Danville in 629 days, Clevenger says it’s a learning opportunity for the Admirals.

“Obviously you’re working hard, you wanna win but I think the biggest thing is you’ve gotta learn from each game win or lose and try to get better,” Clevenger said. “We came up a little short and so we need to figure out what we need to do to get better so we can get where we need to by the end of the season.”

“It all has to do with reps,” said the senior. “We’re gonna focus on that in practice and get ready for Boyle County.”

Danville travels to Boyle County to face the No. 1 ranked Class 3A Rebels Friday night at 7:30.