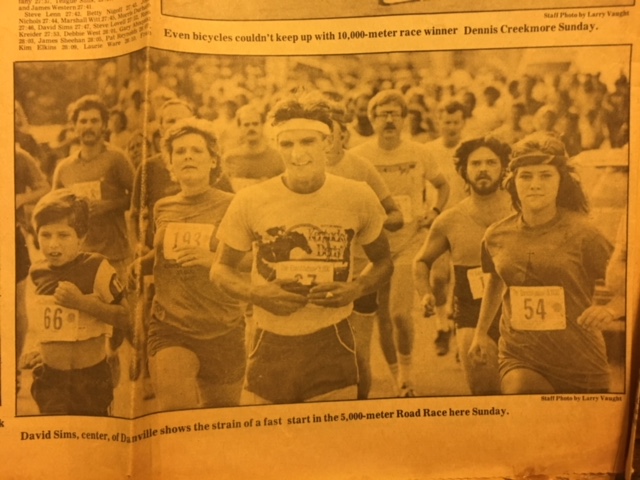 Photos contributed A clipping from the Advocate messenger circa 1982 shows David Sims, Teague Sims’ father, during the 5k.

1978 was an important year for running in Danville — but no one knew it at the time. In the summer and fall of that year, two iconic races got their start: the Jackson Run and the Constitution 5K. No one guessed that 40 years later, both races would still be going strong!

The Constitution 5K was the brainchild of Joey Frankel, with the Hub Frankel department store providing the financial backing for the race. Elmer Jackson recalls the early days of the race. “Nobody knew much about how to run a race then and most of us depended on EG Plummer to organize the finish line,” says Jackson. “Joey’s course layout was an unusual one with a weaving course through downtown Danville and I’m not sure exactly how long it was because the 3.1-mile distance hadn’t been established as standard back then.” 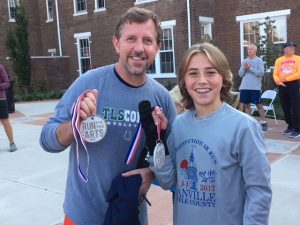 The father-son duo of Teague and Griffin Sims after the 5K in 2017 .

Frankel quickly handed the running of the race off to Mack and Elmer Jackson. Through trial and error and laugher, the brothers refined the process. One year, the intrepid organizers hit on the idea of running a 5K and a 10K simultaneously. This was long before the advent of race bibs and chip times, and Jackson recalls they used a different system to keep track of the runners.

“We used a system of handing out wooden tongue blades, writing the number of the finisher and the time as racers finished. This worked fine for the 10K race with fewer racers, but it was a disaster for the 5K. As groups of 10 and 15 racers passed over the finish line together, after a few minutes we were hopelessly and helplessly behind and gave up.”

When Ernst Crown-Weber opened Danville Bike and Footwear (then Danville Bike and Fitness) in 1993, he got involved with the Constitution 5K and has served as race director since the early 2000s. In 2008, the race became a fundraiser for the Community Arts Center and the dual name of Constitution 5K/Run for the Arts was born. Over the past ten years, the race has raised over $40,000 in support of the Arts Center’s programs for the community.

During its 40-year history, the Constitution 5K has become a beloved tradition for many families, including one runner who boasts a unique relationship with the event. Teague Sims has run in every one of the 39 previous Constitution 5K races, and is looking forward to his 40th race on Sept. 8.

Sims didn’t set out to become a Constitution 5K legend. He participated in the inaugural run at the age of 8 and continued running with his father, David Sims, in the years that followed. Sims says, “My dad would run with me when I was younger and always carried a camera with him and would take pictures of me during the race.”

When Sims was in college, someone mentioned to him that he was the only person that had run all of the races up to that point. He says, “from then on, no matter what kind of shape I was in, I knew I had to be here to keep my streak going.” It wasn’t always an easy task, Sims recalls. “One year, I had a compound fracture of my left forearm from the Danville HS Alumni Soccer Game and had to walk the race just to keep my streak going!”

Now, Teague Sims is sharing the tradition with his son, Griffin.

“When Griffin was about 4 years old, he started running the Kid’s Race before the actual 5K started. When the race started, he just stood there and refused to run, walk or even move.  Finally, after rest of the kids were finished, I was able to get him to slowly jog down Main Street with me to the finish line.  I think I may have told him we’d go to Baskin-Robbins after the race, if he would just jog to the finish line! After that, I had always told Griffin that he could start running the 5K with me when he turned 8 years old, the same age that I started. He has run every race since then. This will be Griffin’s eighth year in a row running the Constitution 5K.  Even though we don’t run the race side-by-side, it’s nice to see him cheering for me at the finish line, after he’s already finished several minutes ahead of me and cooled off.”

In reflecting on the anniversary of the race, Elmer Jackson notes that the climate of races today is greatly changed due the sheer number of races.

“40 years ago there were very few races per year and now there are 1-3 each weekend, so there are a lot to choose from now. The Constitution 5K, however, still has the feel of something special with its tradition and its downtown route.”

The 40th Anniversary Constitution 5K/Run for the Arts will be held on Saturday, Sept. 8. The race kicks off at Constitution Square and winds through downtown Danville, finishing in front of the Community Arts Center. After completing their run, racers will enjoy a delicious continental breakfast provided by Family Medicine Clinic. Race registration is $22 per person, with a family rate of $52 for up to four runners in the same household. Families with young children may sign their kids up for supervised art activities at the Arts Center during the race for $5 per child. Runners may register in advance at Danville Bike and Footwear or online at www.communityartscenter.net.

Coming Up at the CAC

Join us for a public Gallery Talk for the ‘En Plein Air’ exhibit at the Community Arts Center. Get a behind-the-scenes look at this beautiful exhibit with guest speakers John Andrew Dixon, Donna Elam, and Roni Gilpin.

Free and open to the public