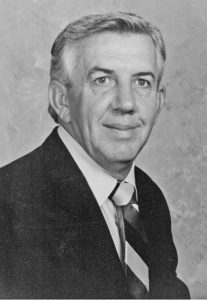 He was born April 5, 1928, in Parksville, a son of the late Harry and Carrie Tarter Sims, Sr. He is survived by his loving wife of 69 years, Pauline Middleton Sims.

Walter attended Eastern Kentucky University until he was drafted into the Korean War where he served in the 101st Airborne Division. He graduated from the FBI Academy, Quantico, Va., in 1973, served in the U.S. Treasury Department in Fort Knox, Ky., and served 26 years with the Kentucky State Police in Richmond, Elizabethtown and as post commander in Pikeville. He was a member of the National Emergency Management Team and the American Legion. Walter was a loyal supporter of all local high school sports and was a Danville Admiral at heart.

In addition to his wife, Pauline, he is survived by his daughter, Carrie Leigh Sims (Scott Tymensky); two grandchildren, Hunter May and Samantha May (Akeem Ray); and a great granddaughter, Aerielle Ray. He is also survived by two sisters, Barbara Honaker and Betty Chambers; and two brothers, Joe (Kathy) Sims and Bill (Sarah) Sims.

Along with his parents, he was preceded in death by his siblings, Della Mae, Jane, Tommy and Harry Sims.

Graveside service is 2:00 p.m. Thursday, August 30, 2018, at Parksville Cemetery, Parksville, Ky. Those who wish to travel in procession to the cemetery should meet at Walden Funeral Home Perryville at 1:30 p.m. Chaplain Darrell Hahn will be officiating.

In lieu of flowers, the family requests that donations be made to Trooper Island Camp, P.O. Box 473, Albany, KY 42602, in Walter’s memory.