Artist Andee Rudloff's design for a mural that features unique aspects of Danville.

Danville City Commission will rehear whether to allow a wall mural in its downtown historic district on Sept. 5.

But when commissioners decide whether the 60-by-20-foot artwork can be painted on the side of the Derby Shoppe and Raggs building on North Third Street, they should not attempt to determine if the city’s Architectural Heritage Board erred in rejecting the mural, city attorney Stephen Dexter said Monday night.

The commission must use the “de novo” standard of review for the appeal hearing, scheduled for 5:30 p.m. Sept. 5 at Danville City Hall, Dexter said. That means the commission shouldn’t give any weight to the AHB’s original decision. It can make a new decision “without reviewing the underlying matters that took place at the Architectural Heritage Board’s previous meetings,” he said. 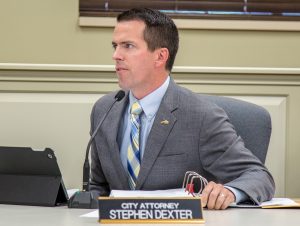 Ben Kleppinger/ben.kleppinger@amnews.com
Danville City Attorney Stephen Dexter advises city commissioners on how to handle an upcoming rehearing of a proposed mural that was rejected by the city’s Architectural Heritage Board.

Dexter said the commission could watch the video of the AHB’s meetings if it wanted to, but that it could distract from the point of the hearing.

“You don’t have to uncover some sort of discrepancy in the process or anything of that nature … it’s just a new hearing,” he said. “… You do have a choice. I think that the most efficient manner to hear the appeal and also the fairest way to hear it afresh is to conduct a hearing on your own and then make a decision based upon the merits that are presented to you in that public hearing.”

Commissioner J.H. Atkins wondered if public comments would be allowed at the new hearing. Dexter said they could be allowed, but are not required. Atkins said he “definitely” wants to hear from the public.

“It means a longer meeting, but I think it would be worth our time,” he said.

Commissioner Denise Terry said she was expecting to focus on the process the AHB went through to make its decision.

“I understand your desire to do that, but to me, that is a divergent path and it will lead you astray from making the best determination,” Dexter responded. “… It’s my job to narrow the question to a nugget for you to determine. To me, if we review process, it has no application to the essential question, and it will be a lengthy process that frankly is more appropriate in a judicial setting than in an administrative one, such as this body.”

Commissioner Rick Serres said he’s in favor of hearing the case afresh as Dexter recommended and believes the commission should limit how many people take the microphone to speak for or against the mural, “so this doesn’t become an all-night affair.”

The AHB approved the north side of the Derby Shoppe and Raggs building on North Third Street as a location for a mural in March. But it held off on approving the mural itself until the Heart of Danville could present in more detail what the mural would be.

The proposed mural was drafted in black-and-white form by nationally recognized artist Andee Rudloff; it includes well-known locations and objects from around Danville, such as Trinity Episcopal Church’s bright red door.

On Aug. 15, supporters of the project were surprised when the AHB did not approve the mural. Members of the board questioned the style of mural.

“I just don’t like the Trinity door,” AHB member Julie Wagner said at the Aug. 15 meeting. “It looks like a surfboard with teeth.”

“The artist did not bring her A-game to Danville. What has been proposed is a mediocre illustration, more appropriate for a concession stand at Millennium Park than our historic district,” AHB member Dixon posted on Facebook after the meeting. “I love art — all styles — and have donated 100s of hours of my professional time to promote the arts in Danville. This does not reach the mark.”

Because the AHB didn’t take action to reject or accept the project on Aug. 15, it reheard the proposal at a special meeting Aug. 22.

Heart of Danville Executive Director Nick Wade and Heart board member Kate Snyder defended the plan at the rehearing.

“The decision from last Wednesday was made from a place of personal artistic preference,” Wade argued. “We are aware that this is a new process, but this decision shows that the process is broken and must be fixed.”

The AHB voted 5-2 to officially deny a “certificate of appropriateness” for the mural. Wade submitted an appeal to the city commission the same day.

Dexter said if one side doesn’t like the decision the city commission makes on Sept. 5, it can then appeal the case to Boyle County Circuit Court.

Correction: A previous version of this story misattributed a quote from Nick Wade to Kate Snyder. The attribution has been corrected in this version.