Quarles: next farm bill could legalize hemp for Kentucky farmers 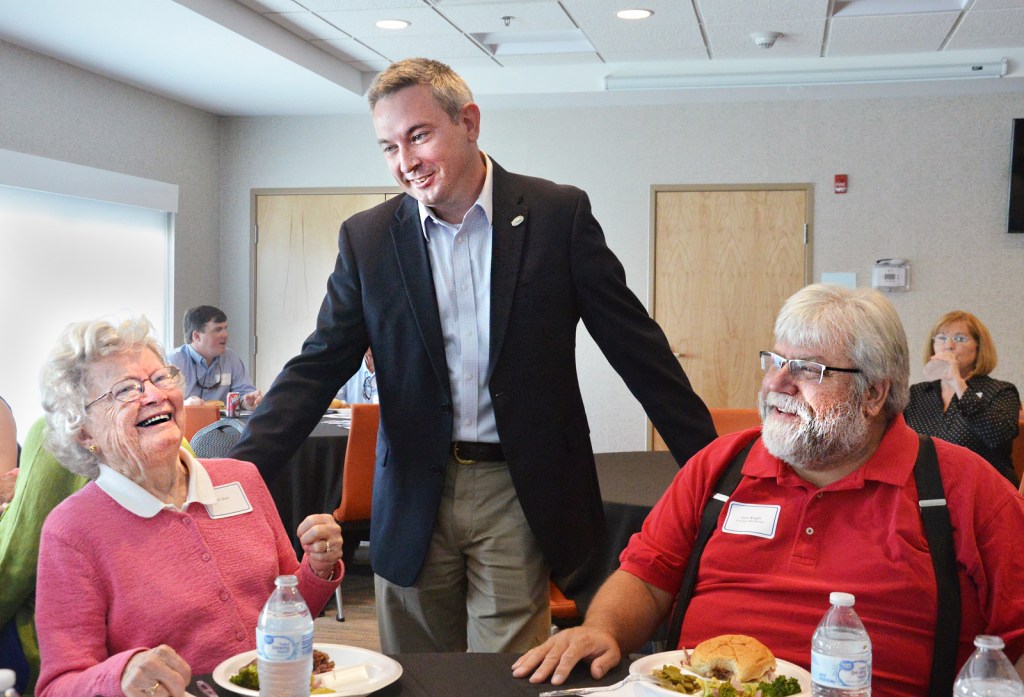 Photo by Robin Hart/robin.hart@amnews.com Kentucky Commissioner of Agriculture Ryan Quarles shares a laugh with Ruth Shear, and Steve Knight at the quarterly Boyle County Chamber of Commerce luncheon on Tuesday.

“You’re going to see it in the next farm bill,” said Quarles, who spoke at the chamber’s quarterly luncheon. “Because we believe chances are great that with Sen. (Mitch) McConnell’s language, industrialized hemp will become legal for the first time in 80 years.”

“So I’m constantly working with our friends in Washington D.C. I met with President Trump in February at the White House to talk about our rural infrastructure,” Quarles told the crowded room. “And we have a phenomenal congressional representation right now, both from the House side and the Senate.” 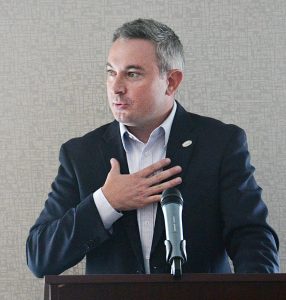 Photo by Robin Hart/robin.hart@amnews.com
Kentucky Commissioner of Agriculture Ryan Quarles speaks at the Boyle County Chamber of Commerce lunch on Tuesday. Under his leadership, the KDA started several new programs including intiatiives to combat hunger and connect Kentucky farmers to new markets.

Following an enthusiastic round of applause, Quarles added, “Industrial hemp is a crop that connects our past to our future … Kentucky is positioned to benefit the most out of any other state, if and when it’s legalized, when it’s decoupled from its illicit cousin (marijuana) at the federal level.”

There are currently 200 Kentucky farmers who have hemp crops planted right now — twice as many as there were in 2017. He also said 72 processing companies are currently producing fibers, seeds and nutritional supplements from hemp.

“It’s not a novelty anymore,” Quarles said. “It’s a crop to add to the crops for our farmers to look at in the future”

Quarles admitted it’s unclear if hemp could replace tobacco. “But last year, we sold over $17 million of Kentucky-grown hemp to consumers. People are wanting to buy this.”

Farmers are used to adapting, planting diverse crops and being innovative in how they make a living on the farm, Quarles said, “because a crop that was once really strong is only about a third of what is was. We have people out there inventing every single day. That’s why old crops are coming back, like industrial hemp. That’s why we’re starting to do research with kenaf, a fibrous plant that Toyota and Ford uses already in their car parts, and is being grown in Kentucky.”

He said his department is hoping to connect the state’s farmers with “a growing manufacturing sector right now.”

He explained that prohibition in the 1920s “put our hop growers out of business. But now we’re bringing them back.” He said the explosion of the craft beer industry is why hops farmers are returning. In 1980, there were only 50 craft brewers in the U.S. Today, there are more than 6,000 craft breweries.

“Now there are 16 commercial hops-growing farms in our state that are connecting with the craft beer industry — an industry that’s worth $600 million every year, Quarles said.

Boyle County farmers also depend on international markets, Quarles said. About 40 percent of the soybeans grown in the county are shipped overseas. “One in four rows of corn out in the field in Boyle County ends up overseas. Eighty percent of the tobacco that is still growing right here, is going overseas.”

“It’s important to realize that we have to have access to international markets,” Quarles said.

But local agriculture business is also important to the area’s economy. There are 620 farms in Boyle County, which averages to about 164 acres per farm.

And those figures don’t include all of the other non-farming jobs and businesses related to agriculture such as hay and feed producers, he added.

Quarles said farmers are true risk-takers and entrepreneurs. Many of the listeners nodded in agreement, and one person exclaimed, “Amen!”

However, Quarles said, “Farming is one of the few occupations that you do everything absolutely right, and still end up losing money.”

He said farmers are on the edge of a great harvest right now, but one storm could ruin it.