Admirals, Rebels each with something to prove in Friday showdown 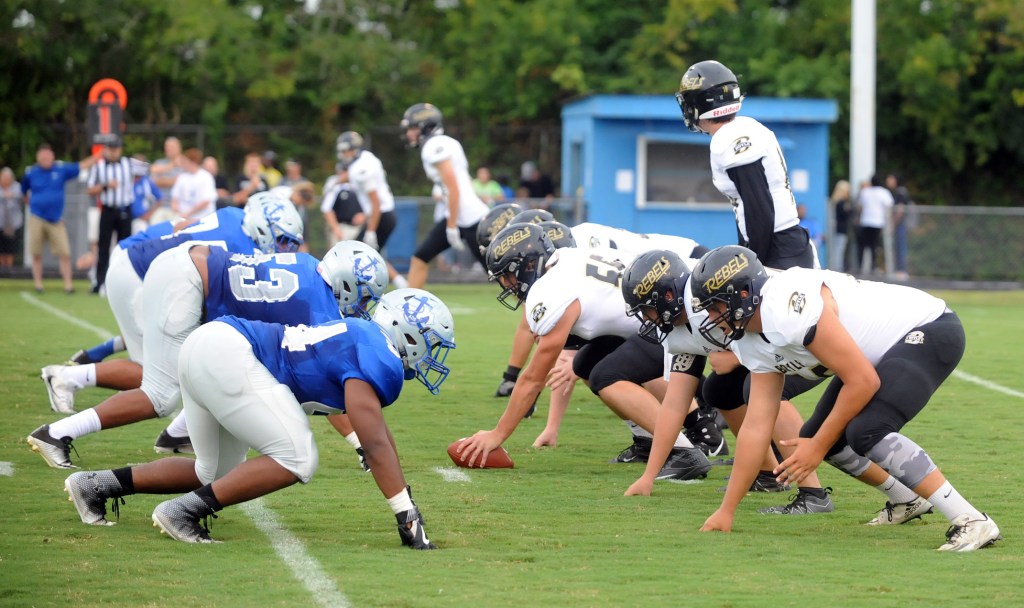 Game three of the regular season doesn’t much bigger than Boyle County vs. Danville.

Both are defending state champions. Both have something to prove.

Boyle County is out to prove that the Admirals’ defense can’t stymie an electric offense again this year — Danville won last year’s slugfest 10-7 — and that their defense can corrall one of the best dual-threat quarterbacks in the state. The Admirals want to prove themselves on the state stage after falling to fifth in the Associated Press Class 2A state rankings.

There’s plenty on the line for both teams, but the message from each head coach is similar.

“I think early in the season, you want to try to improve from game to game,” Danville head coach Clay Clevenger said. “There were some good things and there were some things that we still need to work on. When you face good teams, they show you some of your warts, so to speak. I’m sure Boyle will show us some more. That’s a good thing because that allows you to keep preparing, keep trying to become as good as you can.”

Boyle County head coach Chuck Smith said last week’s 50-7 victory over Franklin County was a step up from the Rebels’ first game of the year, but admitted they’ve got a long way to go to reach the top again this year.

“I think we were a little better, which is a good sign,” coach Smith said. “We were a little better than we were against Ballard, that’s for sure. We made some improvements in the areas that we had worked on in practice. We’re still a long ways away from where we need to be and hopefully we can improve again this week.”

Both teams played Saturday, meaning a shorter week to prepare for a game that the state will be watching.

“It’s that time of the year to grind,” Clevenger said. “You get a little bit of a short turnaround from playing on Saturday to Friday, both teams are exposed, nobody gets an advantage on that. It just makes everything happen a little faster, as far as preparation. It’s a really good football team we’re going up against and it’s going to be a big test for us.”

Danville’s 28-10 loss to Corbin was a close game throughout before the Redhounds pulled away late. Corbin’s last loss? Last year’s 3A state championship to Boyle County. The Redhounds are among 3A’s elite.

“I thought we came out and matched the intensity level,” he said. “It was a hard-hitting, physical football game from start to end. They obviously pulled away there a little bit at the end and I felt like we were running out of gas a little bit, they were platooning and we weren’t. We had a lot of guys going both ways. That can be tough, especially early in the season. But I feel like we came in focused and ready to play and it was a good football game.”

That’ll be the test for both teams on Friday: How each team handles nerves on such a big stage.

“It’s a big-time game in a big-time atmosphere and it’ll get us ready for later in the playoffs,” coach Smith said. “We’ve got to be able to perform in that kind of environment. We need to win a game like this before we get to that point. Hopefully we’ll be ready to go.”

Clevenger touted the Rebels’ offense ahead of Friday’s contest.

“They’ve got really, really talented skill guys that have a lot of experience,” he said. “When you put those two things together, it’s a dangerous combination. They understand each other, they’ve played together for a long time. They do a good job calling plays to complement what the kids do well.”

Danville will be a challenge in the trenches again this season, coach Smith said.

“I think Danville has got another really good football team this year,” the Boyle coach said. “The thing that sticks out to me is that their offensive is line is dominating. They come off of the ball really hard and I think their quarterback is special. He makes a lot of things happen for them, he’s able to throw it and run it. He’s just a really good football player. And I think their defense is really aggressive, they really get after you.”

That quarterback is Zach Thornton, who has 133 passing yards and 94 rushing yards this season. Those numbers will swell as the Admirals advance through this season after a slow start for their offense.

Both defenses are anchored by juniors, as well: Boyle has Wilson Kelly in the trenches, who leads the team with 16 tackles and four tackles for loss. Hayden Bottoms, Isaac Hardwick, Ezarious Roller and Drew Baker all have over 10 tackles and at least one tackle for loss this season.

Danville, meanwhile, has junior Darrian Bell in the middle of its defense with seniors around him: Kishon Bartleson (also known for his running), Brennen McGuire (Danville’s leading receiver) and Isaiah Miller (another running back) each have forced at least one turnover this season.

What we see from both teams on Friday will certainly not be what the two teams will be at the end of the season, but it will give us a barometer for just how far they need to go to contend for a state championship.

“We want to take another step forward,” Clevenger said. “Improve, get better, go out there and compete. I think that was our work coming into the year, is to compete. I think understanding that and competing at a high level, when you’re competing at a high level, you’ll learn things about yourself that you didn’t know, good and bad. Then you can improve on them. That’s what we’re trying to get done here early in the season.”