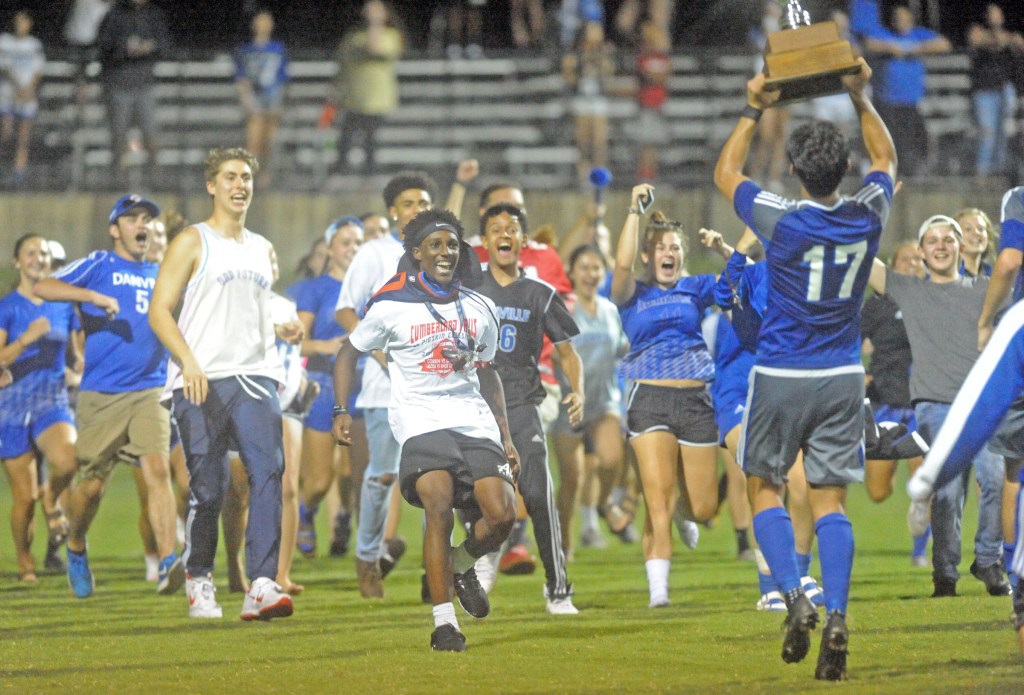 The Admirals defeated Boyle County 2-1 Thursday at Reynolds Field, their second-straight win in the rivalry. Danville also topped the Rebels in the 45th District title last year, but before that, the Rebels had reeled off nine-straight wins.

Every goal was scored in the first half of the rivalry match, but all 80 minutes had action. Nathan Hazlett and Alec McAllister hit the score sheet for Danville. Ryan Henry was the Rebels’ goalscorer.

The victory was proof to Danville head coach Brent Beauman that his team can play the way they practice.

“I thought it was a good win,” Beauman said. “The offense, we started to really get a lot of good combinations, and that’s what we’ve been working on in practice. If we can get those combos going, we’re going to be hard to beat and stop.”

Those combinations were on display in the Admirals’ first goal, midway through the first half.

Gabe Cisneros won the ball after a quickly-taken free kick by Boyle County in the Rebels’ half. He found an open midfielder, who played Jesus Ayala on the wing and Ayala passed to Nathan Hazlett for a fierce left-footed goal.

Danville’s second goal wasn’t quite as pretty but still counts the same. McAllister won the ball in his own half of the field before sprinting up field. He latched on to Hazlett’s flicked header and scored.

“Alec’s goal was just gutty. He wasn’t going to get beat,” Beauman said.

Boyle would bring itself within one when Caden Ferrell feathered a through-pass to Ryan Henry for a goal with just four minutes left in the first half.

“That was a good pass,” Boyle head coach Cris McMann said. “I wish we would’ve looked for more of those types of passes, I think a lot of times we held onto the ball for one or two touches too long, then the opportunity is gone.”

McMann wasn’t happy with the way his team played in the first half, but the second half was much better for the Rebels, he said.

“I think it was a typical Danville/Boyle County game,” he said. “Lots of emotion and intensity. I think in the first half, they had an edge on us as far as the intensity goes. Halftime we said we needed a bit more grit, to be a bit tougher. I think in the second half we fought harder for 50/50 balls and just played harder all around.”

Both goalkeepers made critical saves, and both coaches applauded the other team’s keeper for their performances. Plenty of chances were had on both sides, and that’s something the Rebels will take into future games.

“We’re disappointed, but if we don’t learn anything from it, it’s a worthless loss,” McMann said. “I think the boys learned what they needed to learn.”

Beauman thanked an incredible crowd on both sides for a great atmosphere.

“It’s definitely good for these guys to get a quality win because they’re a good team,” Beauman said. “They’re working hard. It’s good to see this, the fruits of their labor. We play hard games but to have this crowd tonight, the support for Danville and the support for Boyle, soccer has definitely come a long way since I played.”

Beauman had his daughters, Lucy and Emilee, greet him on the field after the game. Lucy has been battling leukemia in Lexington.

“As great as it is to win, after every game Emilee and Lucy would run across the field,” Beauman said. “It was amazing to have Lucy run across tonight. I think the boys sometimes grab some of her fighting spirit, and I hope everybody knows how much we appreciate the community.”