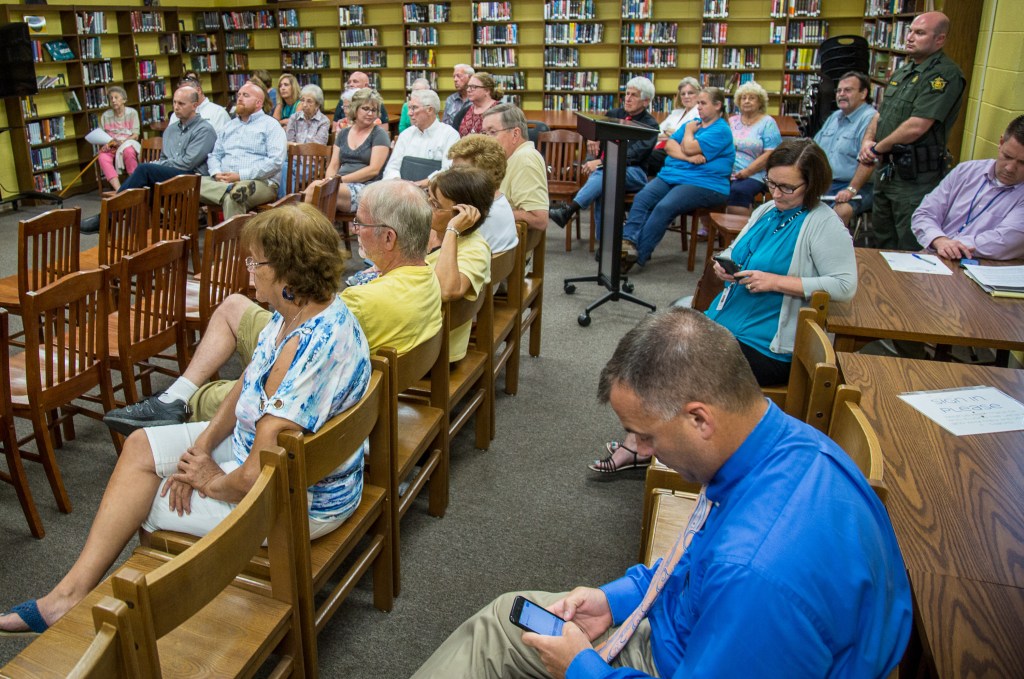 The Boyle County Board of Education voted Thursday night to take the compensating rate for its property taxes, meaning that source of revenue will remain relatively flat for the school district this year.

The decision came after an hour-long public hearing, which dozens attended in order to speak against an increase in their property taxes.

Tom Ellis, a leader of an informal group opposed to an increase, said 448 people ultimately signed a petition calling on the school board to “rescind the increased taxation proposal and to dispense with any further action on the matter.”

Like all taxing districts, Boyle County Schools must set its property tax rates every year. Superintendent Mike LaFavers and school staff gave board members the option of several rates Thursday night, including several that would have increased revenue for the school district by as much as 4 percent. That largest option would have increased property taxes on a $100,000 home from $704 last year to $746 this year.

But the board ultimately voted in favor of the compensating rate, which means property taxes on a $100,000 home will be $718.

“It may be a pyrrhic victory, but I think we had a victory tonight,” Ellis said. “… I think we had some modicum of achievement” by preventing a 4-percent increase.

Superintendent Mike LaFavers began the public hearing by presenting the options to the board and explaining why a 4-percent increase could be justified. The district is facing about $868,000 in new expenses or losses this year, according to LaFavers’ presentation.

Those added costs include:

• $170,500 for implementation of the district’s new School Safety Strategic Plan;

• $240,755 less in revenue from tangible property taxes (collected largely from businesses on equipment, furniture and inventory) because the total assessed tangible property in Boyle County has dropped by almost $34 million;

• a $242,000 refund due to a company for tangible property taxes paid previously (LaFavers wouldn’t disclose the name of the company Thursday night);

Opponents of increasing taxes said they told board members they don’t believe the taxes being paid now are being used wisely enough to educate Boyle County children. They said they questioned whether taxes are going to instruction or being spent on fancy buildings and other improvements that don’t help kids learn.

When it was time for the board to vote on setting a tax rate, board member Steve Tamme said he is proud of “what’s been happening in the Boyle County Schools” and he would support an increase in tax revenues, eliciting gasps of surprise from many in attendance.

“That shocks me,” one man said. “Oh my heavens,” a woman called out.

Board members defended the school district’s teachers and touted Boyle County High School as one of the best in the state.

Members of the audience defended their positions that Boyle County students are not well-educated and said they believed the board members don’t see students out in the community like they do.

“I’m in the community, too,” Chair Jennifer Newby said. “I go to Walmart. I’m in Lowe’s. I’m going, I’m seeing what our students are doing inside and outside the classroom, and it is great. And I hate it when a kid falls through the cracks and they don’t get the opportunity to learn.”

Newby said she has two children in the Boyle County Schools and “I can tell you that they are learning way more than I did,” even if the “content matter may not be exactly the same.”

But, Newby added, it’s not her kids she is concerned about as a board member.

Board member Laura Guerrant said she thinks it’s “unfair to judge our students by a few incidents.”

Those in attendance at the meeting were not unanimous in opposition to increased taxes. Valerie McMann said after the meeting that she wants to support the school district as it faces less and aless revenue from the state and federal government.

The board voted 4-1 to approve the compensating tax rate. Guerrant, Jones, Newby and Tamme voted in favor; board member Ruth Ann Elliott voted against. After the meeting had concluded, LaFavers said the decision means the district will probably have to “dip into” its reserves and ultimately take an estimated $243,000 hit.

Director of Finance David Morris confirmed through Communications Director Jennifer Broadwater that the district has a cash balance of more than $7 million.

Morris said there are too many moving parts to accurately estimate what the compensating rate this year means for the school’s contingency in future years.

Some expenses this year are one-time hits, such as the $242,000 tax refund; but others like the safety plan investment are recurring; and the district has future construction projects it expects to pursue, the exact costs of which have yet to be determined, he explained.

LaFavers said he thinks everyone did what they were supposed to do at Thursday night’s hearing.

“We felt like we had to come to the board with the option of increased revenue. But we know it’s a board decision,” he said. “So, we presented our option, the community presented theirs. And as our board always does, they came into the board meeting wide open, wanting to listen, and they made a decision. And I think they made a good decision.

“They chose the compensating rate, which doesn’t generate the revenue we were requesting, but it shows they were listening to their community members, and I think that’s a powerful thing for a board of education to do.”

Correction: A previous version of this story stated incorrectly that the board voted unanimously for the compensating tax rate. The vote was 4-1, with board member Ruth Ann Elliott voting against.