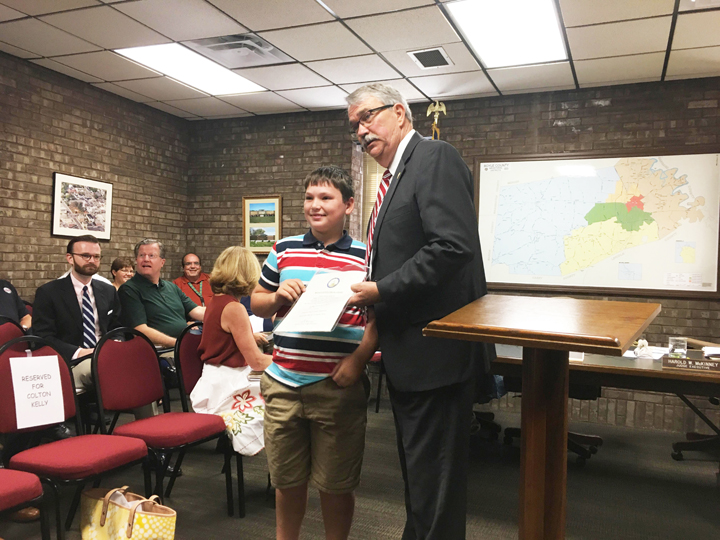 Bobbie Curd/bcurd@amnews.com Colton Kelly, a student at Toliver Intermediate School, is presented with a proclamation as an honorary member of the Boyle County Fiscal Court Tuesday morning. Colton led the Pledge of Allegiance to start the meeting.

Two local organizations gave updates about their centers during Tuesday’s Boyle County Fiscal Court meeting, both thanking the court for its support.

“We have more children that need to be at the center than what we have space for,” Suttles said after she thanked the court for its funding.

“We’re writing grants like crazy to try and get some support for a capital campaign. That’s amazing because it means the center is so relevant.”

Wilderness Trace works to engage children “of diverse abilities, side-by-side, creating enhanced peer modeling and social development experiences.” The center has 62 children to start off the new school year, which is four over capacity, Suttles said.

“We have eight children in wheelchairs, which is much higher than typical. Some children who have very rare disorders, some children with really fragile health.” The center also provides outpatient therapy for 14 children, and serves kids from Boyle, Garrard, Mercer, Lincoln and Casey. The center has classrooms for children ages 2 through 5, and they take part in curriculums with an emphasis on social interaction and play.

The center works to blend speech, occupational and physical therapies during preschool for children with IEPs — Individual Education Plans, and the mantra is that every child has the right to attend a preschool program, regardless of the ability to qualify.

Niki Kinkade, executive director of the Community Arts Center also expressed her gratitude for the court’s support, and said summer camps are the center’s most successful programming.

“This is the first year we’ve really gone all out on summer camps,” Kinkade said. She said the center held 11 weeks of 13 different camps. She told the story of one 11-year-old involved in a camp activity that led them to the Boyle County Public Library, and the child had never been there before.

“We’re proud in these camps that we not only gave them an experience in art, but took them out into the community to some places they’d never been before,” she said.

CAC had 200 campers throughout the summer, Kinkade said, and brought in 10 teaching artists and 13 community volunteers. Twenty-three scholarships were awarded, and the camp involvement showed a 9 percent diversity level.

“This year was the most, by far, we’ve been able to grant (in scholarships). We really kind of reached into the community to find students,” Kinkade said. “We had a CASA volunteer bring their CASA child, school mentors bringing their mentees, churches bringing refugee children, and the Boyle County School District bringing children through their family resource centers.”

Kinkade said the Arts Center was also able to accomodate children with special needs, “Which we’ve never been able to do in the past.”

Kinkade said the Community Arts Center holds the only VSA contract in the state of Kentucky, referring to a non-profit organization providing arts and education opportunities for students and adults with disabilities, and is through the Kennedy Center in D.C.

“We’ve learned how to work with the special needs population, allowing us the comfort to be more inclusive in our programming,” Kinkade said. “We felt proud about that this year.”

Judge-executive Harold McKinney said he noticed more and more people going in and out of the Arts Center. “It’s far busier than what most people think.”

• The Boyle County Fiscal Court elected to take the compensating rate — a rate expected to bring in similar revenue to the previous year —   for 2018 property taxes instead of raising them by 4 percent. Real property will go from 6.5 to 6.7 cents per $100 of assess real estate value; and personal property tax will go from 7.01 to 8.78 cents.

• The inmate per diem at the Boyle County Detention Center was changed from $27 a day to $31, a change that McKinney reported as an outcome from the last Joint Jail meeting. “It’s kind of counter-intuitive, but the rate will go up as the census (inmate population) goes down,” McKinney said.

As of Tuesday, jailers said the jail’s population stood at 271.

“Kind of creeping up, isn’t it?” Magistrate Jack Hendricks asked.