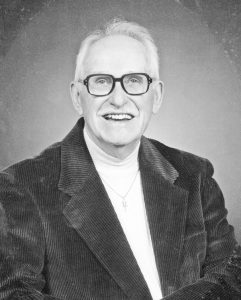 He was preceded in death by his parents; siblings, Alton, William, Sarah, Laura and Nancy; and niece, Joyce Pope.

Houston proudly served his country in the United States Army, serving as a supply officer during World War II and the Vietnam War. After 24 years, he retired as a master sergeant. For 20 years, he worked and retired as a civil servant with ALMSA. He continued his career working with numerous government organizations and federal contractors.

Houston’s life was ultimately spent serving and helping others. He was a deacon at the First United Presbyterian Church in Collinsville, Ill., for many years. He volunteered his time with the Collinsville library, the American Legion, and with the local senior citizens, assisting them with their taxes each year. He was a master gardener and an avid bowler in Collinsville. Houston will be dearly missed by all who knew and loved him.

Memorial donations may be made to NAMI- National Alliance on Mental Illness or to Willoughby Heritage Farms, Collinsville, Illinois. Additional condolences may be sent at www.herrfuneral.com.

A funeral will be held on Saturday, September 1, 2018 at 10:00 a.m. at First United Presbyterian Church in Collinsville, Illinois. Interment will be at Buck Road Cemetery in Maryville, Illinois.