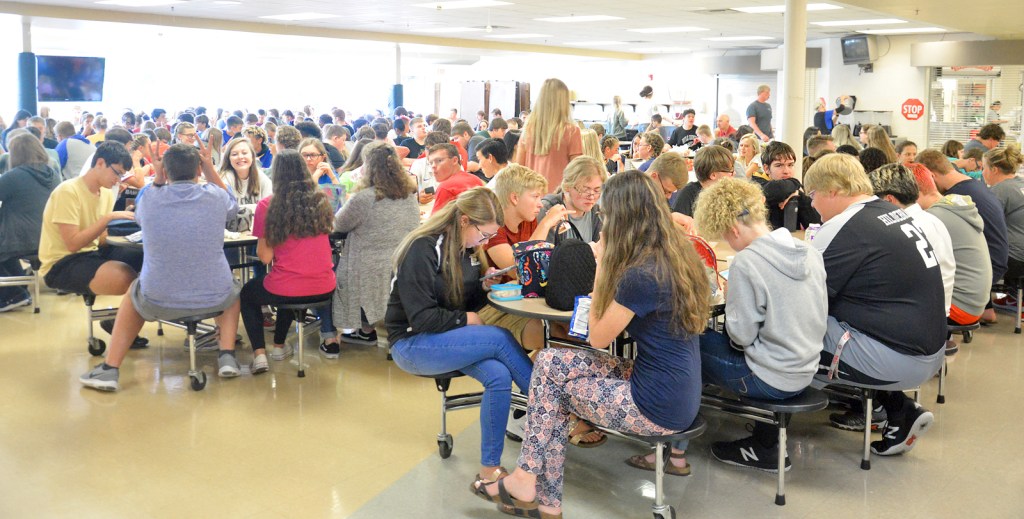 Photo by Robin Hart/robin.hart@amnews.com Students at Boyle County High School fill the lunchroom on Wednesday. New food service director for the school system, Katie Ellis, is working on ways to sustain a strong farm to school program that will be continue for many years to come to provide students with regionally-grown produce and help farmers earn an income.

Fresh, sweet, hand-picked, hand-shucked corn-on-the-cob will be served to students at Toliver Intermediate School today, thanks to the retiring food service director’s passion for the state’s Farm to School Program.

The initiative is intended to “connect schools with local or regional producers in order to serve local or regionally produced foods in school cafeterias,” according the Kentucky Department of Education website.

“This has been my passion for this year because I was hungry for this. I wanted it, and then it happened,” said Patty Taylor, who is retiring from Danville schools today.

Taylor had been trying to locate local farmers who could supply the Danville schools with fresh produce when it’s in season, but she kept running into walls. Most small farmers didn’t produce enough of any one crop to meet her needs. One farmer said he needed at least a year’s notice of what Taylor was going to want for the next school year.

It is a big commitment for a farmer, she said. 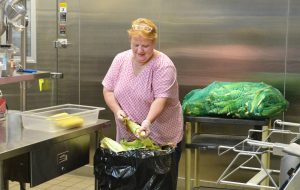 Photo by Robin Hart/robin.hart@amnews.com
Robin Gilliam begins to shuck several dozen ears of corn at Toliver Intermediate School on Wednesday for today’s menu featuring the fresh corn from Overman Farms in Garrard County. Gilliam has worked for the school system for 26 years.

She thought she wasn’t going to be able serve students fresh local food before leaving her post in August.

In June, however, Taylor met a Garrard County farmer who was speaking at a Kentucky School Nutrition Association conference and wanted to sell her crops to schools.

Taylor said she went right up to Babette Overman of Overman Farms, introduced herself and immediately struck a business deal. She said Overman supplied the schools’ summer feeding program with kale, cucumbers, squash and melons.

Already, Overman has sold 60 watermelons, 40 cantaloupes and 72 dozen ears of corn to the Danville Schools. Their tomatoes were planted very late, so the farm can offer fresh, homegrown ones up until the first hard frost, Overman said.

Sitting around a small table in Toliver’s lunchroom on Wednesday, Taylor and the district’s new food service director, April Peach, met with Overman to talk about continuing the Farm to School Program in Danville.

Overman and her husband Kirby have participated in the program for about a year and plan on expanding it next growing season. They have between 6 and 8 acres of pumpkins growing right now, and 4 acres full of a variety of vegetables, including cherry tomatoes, potatoes, sweet potatoes and corn. They are currently supplying schools with fresh produce in Scott, Montgomery, Madison and Bourbon counties, and will be able to service about two more counties, she said.

“We don’t want to become so big that I don’t know her, and I don’t know you,” Overman said, speaking to Taylor and Peach. “That has been so important to me that when I walk into a school, they know me and I know them. That’s huge.”

Overman said last December, students in Madison County complained to the food service director about the vegetables not being as tasty as those served at the beginning of the year. She said the director had to explain the lesson about growing seasons and local produce. 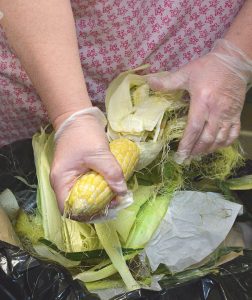 Robin Hart/ robin.hart@amnews.com Shucking and cleaning fresh corn can be a tedious process for kitchen staff.

The push to implement local produce into the school systems whenever possible can be a bit tricky, Overman said.

“The key component is to get the school managers and the workers to believe in it,” she said, and that parents need to support the idea, too.

Taylor said one of the issues of serving fresh produce for school meals is that the kitchen workers have to spend more time preparing it in large quantities. For example, shucking fresh corn and cleaning it is hard work. It’s much easier to open three boxes of frozen corn and dump them into a steamer, she said.

“But to see the look on the kids faces and to know how good it is! You can feel it, you can taste it, you can smell it,” Taylor said.

Peach said not to forget how nutritional fresh produce is too.

Boyle County Schools also has a new food service director, Katie Ellis, daughter of Judy Ellis, who retired from that position at the end of June.

Katie Ellis said she envisions the Farm to School Program as a complex body of work that will eventually be sustainable for many years to come. She welcomes all of the produce that agriculture students have supplied the school with several times over the years. Most recently, they grew lettuce for the school to use and even won an award for their work, she said.

Ellis is also collaborating with ag teachers on ways they may be able to work together on crop projects to help feed their students. But since she is responsible for feeding at least 2,000 students every day, developing a larger, more diversified and sustainable way to serve locally or regionally grown produce is a goal she has set.

Ellis is studying procurement procedures, food safety and certifications that farmers will need to be familiar with when growing and selling crops to schools. “There’s a lot of regulations that comes with that.”

She believes strongly that farmers should be able to earn a good living, so balancing cost with food production is an issue that needs to be addressed.

Being in the food service profession, Ellis said she is always looking for ways to serve students the best food possible at a reasonable cost. But before she makes any drastic changes, she will be studying the process of regional crop production, as well as methods for transportation and processing of the locally grown foods that are available. She will also be asking regional farmers what crops they need markets for, hoping that she can incorporate those foods into school menus.

There needs to be a deep systemic change in supplying schools with more regionally produced and less processed foods, she said.

In the meantime, Ellis wants to take advantage of local produce that’s already available periodically. She may feature a special menu using locally produced foods, or sometimes serve locally processed hotdogs, which teachers were served on their first day back to school, she said.

Back at Toliver, Overman said they are already planning for next growing season. They are building a new greenhouse and may get a couple more acres to farm. She said she and her husband are telling school food service directors, “If there are things you know you want us to plant, tell us and we’ll plant it for you. Now is the time to know.”

“This is like a field of dreams,” Taylor told Overman. “ If you plant it, they will come!”