Boyle County takes down Danville with big second half 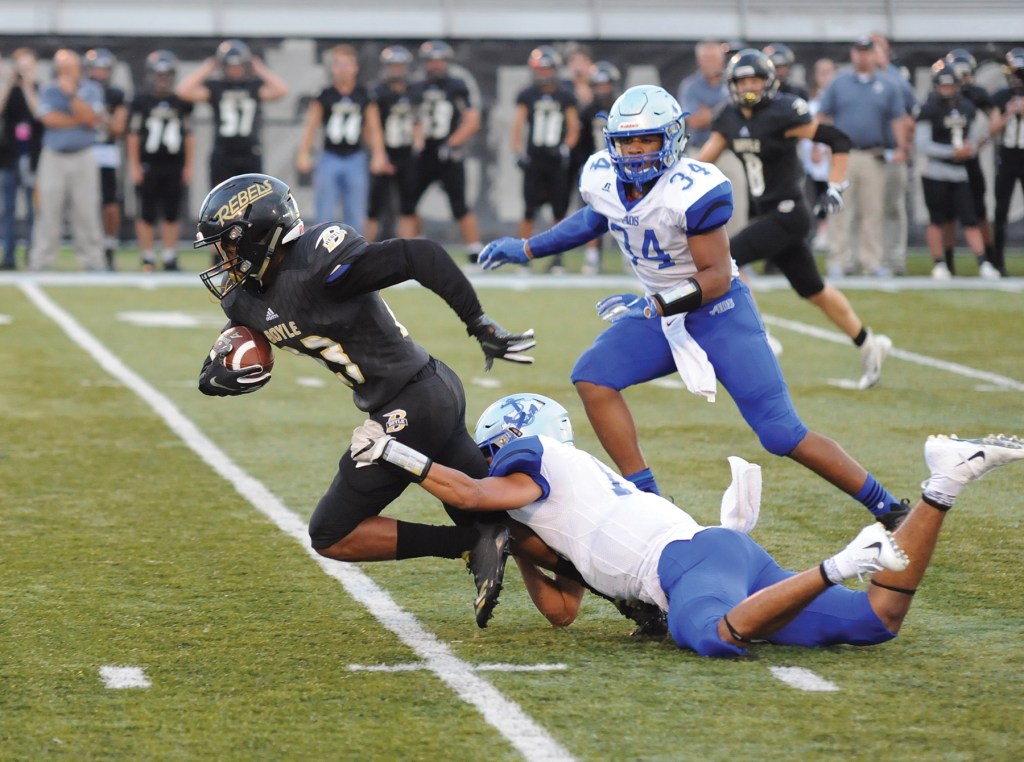 Boyle County and Danville went back-and-forth in a first half of thrills before the Rebels pulled away to win the rivalry matchup 34-17.

It was Boyle’s first win in the rivalry since 2015. Both teams had their playmakers primed for Friday night’s game, and playmakers delivered on both sides of the field.

“I think we settled down after they came out. It was like two big heavyweights slugging it out,” Boyle County head coach Chuck Smith said. “I think people don’t understand that we’ve got a lot of guys who haven’t played in this big of a game atmosphere like this. It was their first time, we had a couple dropped balls, we had a missed field goal. Like I was telling them, the second time we get the chance to do this in a big-game situation, it won’t be their first, it’ll be their second. That’s what we got out of this game.”

The Rebels made the plays down the stretch to win the game, but there were big plays from the first drive of the game.

Danville marched the ball into Boyle territory to open the game, then a play clock malfunction forced the Admirals off of the goal line. Zach Thornton threw an interception after trying to drop off a screen, with Boyle’s Wilson Kelly reaching up for the pick.

But the Rebels didn’t do much with the ball, and a snap through punter Jackson Smith’s legs gave Danville great field position to start its second drive.

That’s when quarterback Zach Thornton would score his first touchdown of the night, carving his way through the middle of the Boyle defense for a 37-yard score.

And that would be the only score of the first quarter.

“We needed to get off to a better start,” Danville head coach Clay Clevenger said. “We did a lot of good things early in the game. That first series, not getting any points out of it hurt us in the long run. But we came out, I told the guys, a couple miscues but in the first two quarters, I thought we played the best football we have all year. That’s a good sign. We’ve just got to learn how to fight through a little bit of adversity, when we get a little tired, things like that. If we can do that, we’ll have an opportunity to be a really good football team.”

Thornton would score again on a five-yard run, less than three minutes into the second quarter. The Admirals led 14-0, and that’s when Boyle’s defense kicked in, coach Smith said.

“After the first couple of series, I feel like our defense played really well,” he said. “I think we started playing harder and more determined. I think in the first half, we were going hard but we were just tapping out because we weren’t coming off of blocks and making plays. After they woke up and after Danville hit us in the mouth a couple times, they woke up and started playing.”

Boyle would score on its next drive, capped by a one-yard run from Landen Bartleson.

The Rebels’ defense returned the favor, forcing a three and out.

Then it was Reiley Colwick’s turn to take over.

Colwick returned a punt from deep in his own half for a touchdown to tie the game at 14-14 before halftime.

The Rebels would have a chance to take the lead but Jackson Smith’s field goal hit the bottom of the goalposts.

Bartleson had just 14 yards rushing for the Rebels at the end of the first half. The Admirals weren’t allowing yards on the ground, but Boyle quarterback Reed Lanter was having success through the air: At halftime, he was 14-for-24 with 150 yards.

“We were able to slow them down running but we didn’t slow them down passing,” Clevenger said. “They were able to complete the ball whenever they needed to for first downs. We’ve got to learn to stretch, learn what people are trying to do to us throughout the game, compensate for things. We really just didn’t make adjustments on the fly like we needed to. Guy’s running an out route every time it’s 3rd and 7, we’re telling you to stretch and we’re still looking at the quarterback, that’s just being undisciplined.”

Colwick was his favorite target, securing six catches for 71 yards.

During the first drive of the second half, Lanter was intercepted — for the first time all season — by Zach Thornton. But again, Boyle’s defense held on a short field.

Midway through the third quarter, Thornton was shaken up after a play with muscle cramps in both legs. That impacted the way Danville’s offense worked the rest of the game, Clevenger said.

“It’s one of those, when you’re playing the quarterback position in practice, you’re not getting a lot of movement. And that’s probably my fault, I need to get him running more other than what we do after practice,” he said. “He’s been doing secondary, we want him to go both ways because we’re a better defense when he’s on the football field. We can’t have him not at full speed, I think midway through the third quarter he got hobbled up, and at that point, it limits us to what we want to do offensively. We’ve got to work on that.”

Neither team could find much room to work in the third quarter, but Bartleson would get his second touchdown of the night on a one-yard pitch for a score.

Boyle led 20-14 after a missed point after attempt, and that was the score through three quarters.

Nathan Hazlett would bring Danville within three, 20-17, at the beginning of the fourth quarter.

But those three points were the only points the Admirals scored in the final 24 minutes.

“I think the second half, we made some adjustments at halftime and they worked in our favor,” coach Smith said. “I thought we played a little harder and more determined, too.”

Danville would take over with 6:52 remaining after Boyle failed to convert a fourth-and-goal opportunity, but it was the Rebels’ defense again that made a big play.

Danville opted to punt, deep in its own half, but the snap went through punter Tres Walkers’ legs. He picked it up but would be blocked by Isaac Hardwick, and Ned Stephens would recover the ball in the end zone for a touchdown.

That play proved to be the dagger. Boyle took over again on fourth down, and Bartleson scored his third touchdown of the night from inside the five yard line to seal the game.

Clevenger said the loss hurts but can be a lesson for his team in future games.

“The biggest thing, we’ll treat it how we want to treat it. If we want to hang our heads and feel sorry for ourselves, it doesn’t do us any good. We’ve just got to come back, get back to work next week. This game in the big picture doesn’t mean anything, it just means some bragging rights in town. We’ve got to come back to work on Monday, get better and keep improving.”

The win keeps Boyle undefeated (3-0) on the season. The Rebels haven’t lost a game since last year’s game at Danville.