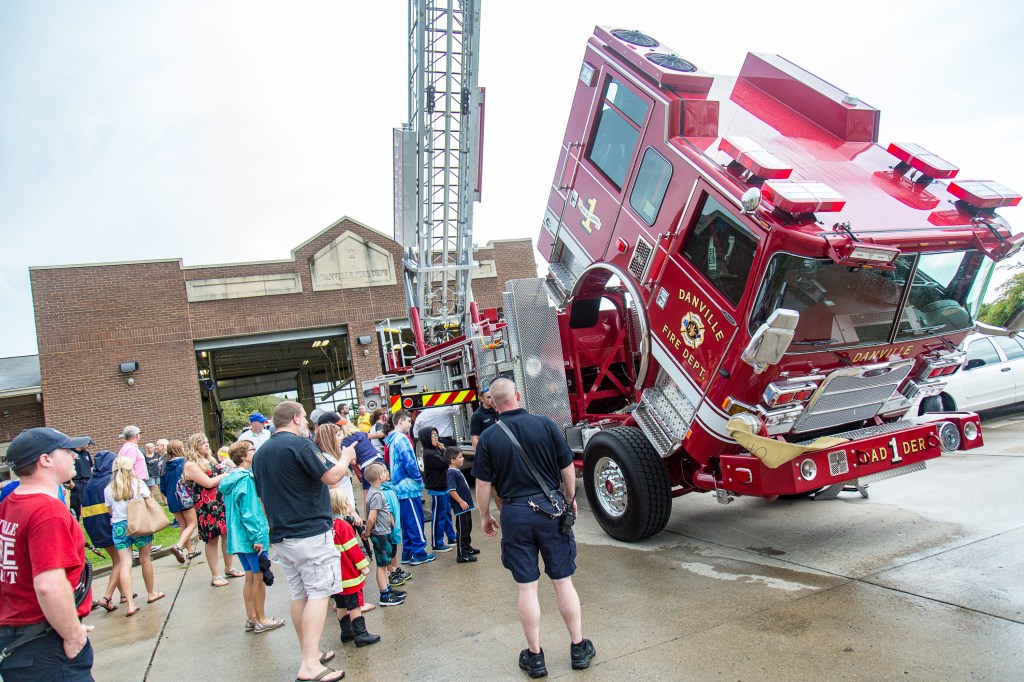 Ben Kleppinger/ben.kleppinger@amnews.com Community members take a look at the new fire truck's engine. The truck's cab tilts forward and off of the engine to allow it to be serviced.

Danville’s new Ladder 1 fire truck was officially put into service at 6:58 p.m. Friday, after a community “push in” ceremony. 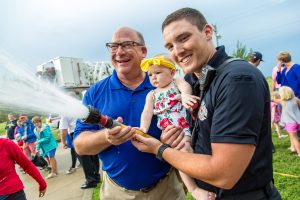 The new truck is a Pierce ArrowXT Tandem truck with a 107-foot ladder. The truck has improved safety features, ladder controls and more features that were not available when the city bought its current truck 25 years ago. It cost more than $1 million.

The new truck is 12,000 pounds lighter than the city’s previous one, and it will be able to navigate many tight turns in the city that the current truck can’t.

Community members got to watch the truck’s ladder in action and explore the inside of and many cargo bays on the truck Friday evening.

Then, firefighters hooked up a hose from the old ladder truck, a 1993 Pierce truck with a 100-foot ladder. Kids lined up to help spray down the new truck with water from the old truck, then community members all helped dry off the new truck. The youngest participant was 7-month-old Sarah Kate Agee, daughter of Danville Firefighter Joshua Agee. Sarah Kate’s dad and Fire Chief Ken Pflug helped her hose Ladder 1 off. 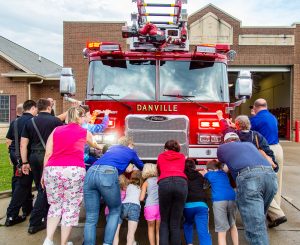 Finally, attendees “pushed” the truck into a bay at Fire Station No. 2 on the south end of the Danville bypass. Danville City Commissioner Denise Terry was given the honor of driving the truck as the community pushed.

Pflug said just as the department’s old ladder truck served for 25 years, the city plans on this new truck serving for another 25, meaning it’s expected to be in service until 2043. Fire engines are replaced on a slightly shorter timeframe — every 20 years, he said. Engine 17 is the next truck slated for replacement in two years.

Pflug said the city’s old ladder truck will be declared surplus property at the next Danville City Commission meeting. He doesn’t yet know who will buy it. Replacing fire trucks help keeps maintenance costs down; and ensures the fire department is ready and properly equipped. It also becomes necessary after 25 years, because parts become harder and harder to find. There are some parts on the old ladder truck which, if they broke, the city couldn’t obtain a replacement, he said.

Pflug said anyone who wants to see the new Ladder 1 truck is welcome to come out to the fire station any time for a tour. “We want the community to see the truck,” he said. “It’s their truck.”

To order prints of photos from the push in, click here.