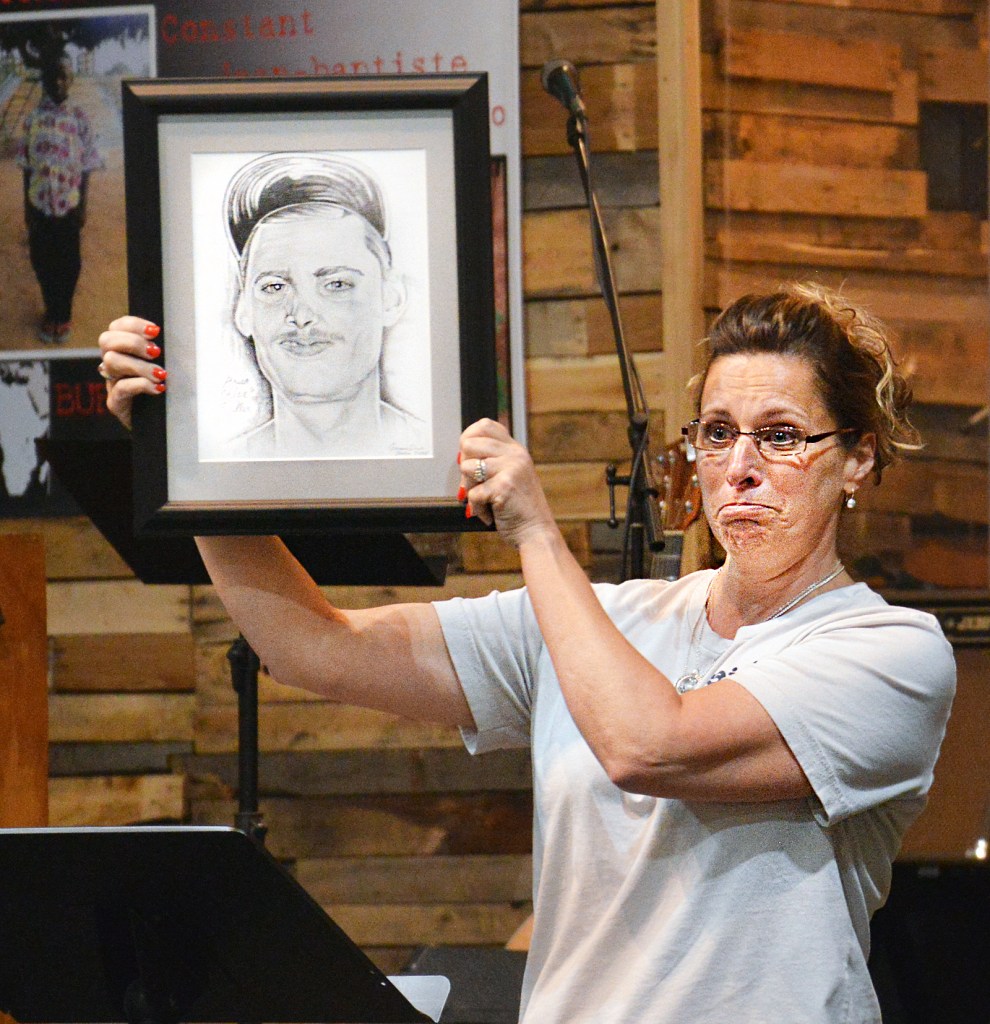 Photo by Robin Hart/robin.hart@amnews.com Michelle Florence, R.N., holds up a portrait of her son, Alex Fuller, who died from a drug overdose in February, 2017 when he was 24 years old.

Nine days after her son’s 24th birthday, Michelle Florence lost him to a heroin overdose.

Florence shared her story about the death of her son, Alex Fuller, at the International Overdose Awareness Day event at Indian Hills Christian Church Thursday night.

Holding up a portrait of Alex drawn by her co-worker Germaine Dunn, she tearfully said, “This is my beautiful, sweet boy.” He died on Feb. 5, 2017. 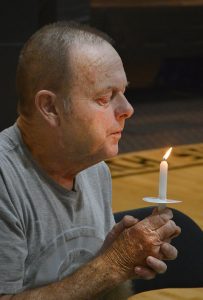 Photo by Robin Hart/robin.hart@amnews.com
In recognition of International Overdose Awareness Day at Indian Hills Christian Church Thursday night, John Hughes holds a candle in remembrance of someone who died from a drug overdose.

Florence told the crowd she knew he had been on drugs and she was helping him quit. Alex really wanted to stop using, she said. He had just found out he was going to be a daddy.

“He was taking suboxone,” she said. “I thought he was clean.”

Florence said she doesn’t think suboxone, a drug used for treating addiction to to painkillers, really helps. “They need to get clean” instead of using a different drug, she said.

Florence is now a nurse at Isaiah House, a residential and outpatient treatment center for men addicted to drugs and alcohol located in Willisburg. After her son died, she decided to commit herself to helping others fight their drug addictions.

She said she’s a bereaved mother who’s just now able to talk publicly about losing “my sweet boy.” She hopes by sharing her heart-wrenching experience of losing a child to drugs, she may be able to help someone else avoid the same loss.

“Look for the underlying things” that cause someone to use drugs, she pleaded. “If you know anybody using, get them help. Love your kids and get them help.”

The overdose awareness event was titled, “A time to remember, a time to act.” Mike Crowe, pastor of Indian Hills Christian and board member of Hope Network, told the solemn group they were honoring the memory of those who died from their addictions and urged everyone to continue fighting to “crush this epidemic.”

She said these numbers also reflect the grief and pain suffered by the families and friends who lost loved ones through addiction.

Miles urged everyone to stand with each other.

“Remember and mourn for those we’ve lost,” she said. “And pledge to continue to act” by getting treatment for those who need it so they can recover from addictions.

She said everyone needs to work together so that no more lives will be lost to overdoses and treatment is available to anyone who wants and needs it.

“We must have second chances and love.”

Photo by Robin Hart/robin.hart@amnews.com As members of the Isaiah House band, Rise Up, performed during the overdose awareness event Thursday night, several members of the audience stand in support.

Photo by Robin Hart/robin.hart@amnews.com In recognition of International Overdose Awareness Day at Indian Hills Christian Church Thursday night, John Hughes holds a candle in remembrance of someone who died from a drug overdose.