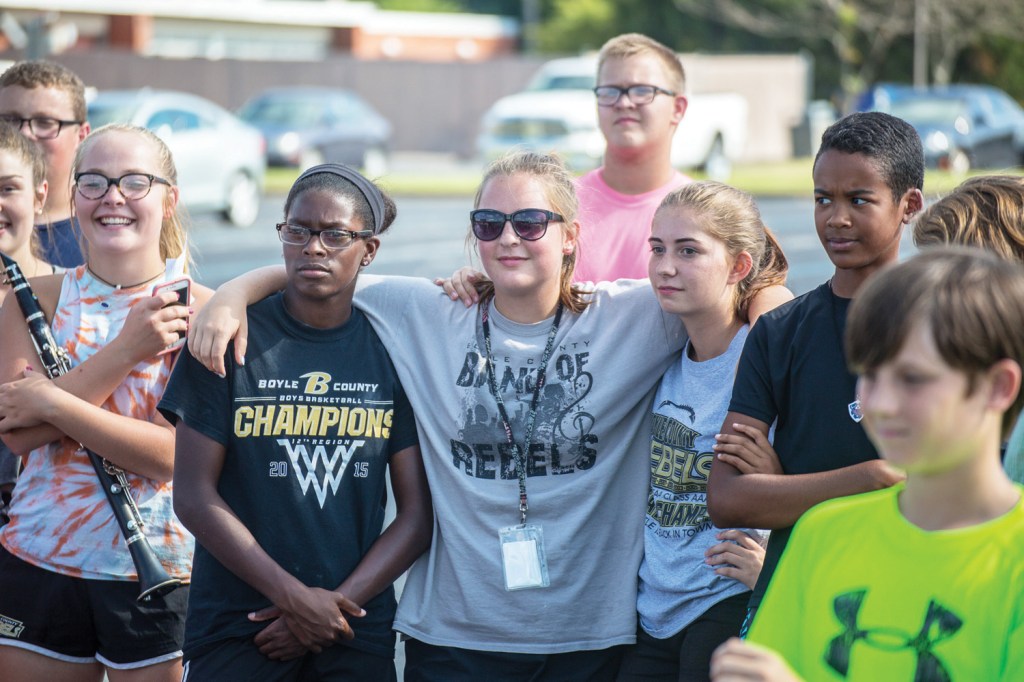 One of the vice presidents of the Boyle County Band Association wishes people knew just how much work school bands do to put on a good show. Rob Hill says if the community comes together to support the “showdown” planned for Saturday, Sept. 15, they can see it for themselves.

The Boyle County Marching Rebels Showdown will be held at Rebel Stadium, the first competition held there in seven years. Twelve bands will each get their “15 minutes of fame on the field,” Hill says, which many don’t realize is a major production. 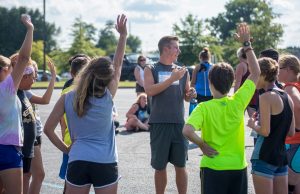 Hill says it used to be called an invitational, because that’s how it’s done. There are several competitions around the state, and school bands sign up for which ones they want to participate in. Right now, the Boyle competition is the biggest one that day.

Hill was in the Boyle band back in the ‘90s, and says boy, has it changed. He was in the drumline, and most of the band productions focused on staying in a straight line.

Now, you have sound systems involved, talking and singing.

“Now, it’s such a production. It’s like a play on the football field,” he says, with some programs being comedies, others being dramas. They actually have a storyline.

This year’s program for the Rebels is Pop Art(iculation), giving major nods to pop art influences. Hill says most only see the bands when they hit the field, but they have no idea of the work these kids put in behind the scenes.

“This performance will be very different. It’s more bright and ‘poppy’ — not dark at all,” senior Aly Hill says.

“I went to a past band competition years ago, and remember thinking ‘this is pretty awesome,’ and I hoped that one day we’d have one,” senior Ashley Daugherty, field commander for the Marching Rebels says. “And it happens to be our senior year that it’s happening, that’s cool.” 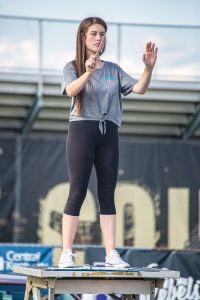 The two girls who help lead the band say the community should come out and show their support for many reasons.

“You get to meet a lot of people from different schools. And it’s just a fun experience for us, in showing off all our hard work. It makes you so proud of what you do,” Aly Hill says.

“They’ve been out there, since the beginning of July in the heat, out on the asphalt all day, learning drill and music at the same time. They do that four days a week, not counting Saturdays, when they start having competitions,” Rob Hill says.

He says back when he was in band, there were more people in the stands on Friday nights at halftime than there were during the games, and the band traveled all over the country going to finals.

“It’s kind of comical to me that band doesn’t get the respect that it should as a — and I know it sounds weird — but as a sport,” Hill says. He says if you look at the practices they endure, it’s just like football, baseball, basketball … and it takes the same devotion and passion. But sadly, outdoor sports have dwindled over the years since he’s been in school, Hill says.

“People don’t get outside and want to play anymore. Not as many kids want to play in marching bands, either,” he says.

Daugherty says it’s true band doesn’t get as much respect as other organized sports.

“The school — as a whole —  just thinks that football and those kinds of sports are more important. They don’t get how much time we put in,” Daugherty says. “We’re out here more than we’re with our families. It’s an amazing organization and I love it so much.” 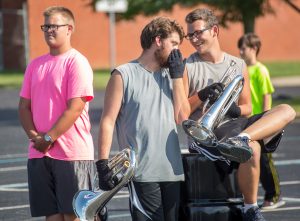 “Band is like a second family to all of us,” says Aly Hill, who is Rob’s daughter, horn sergeant and also plays the clarinet. “We put just as much if not more effort and time into than other sports do. It’s surprisingly not as recognized. To others, we’re just a bunch of band nerds.”

This year’s band has 59 players, which Rob Hill says is not bad; they were hoping to have around 70. The band will lose 13 seniors after this year, but they hope to gain the same number back with new recruits.

“If a kid asked me today why they should be in band, I’d say to have fun,” he says. “We’re like a family. Some of the band kids I was in with back in the ‘90s are now parents who I’m working with on this band.”

His wife, Amy, was also in band — she played woodwinds while he was on the drumline — but they didn’t date at the time. Both his daughters are in this year’s Marching Rebels, too, something that made he and his wife happy. His youngest joined to be able to play with her sister.

“I love that they’re in something where they’re around people, and learning something. Music is a very — well, studies have shown how it helps kids use both sides of the brain, and how music is good for everyone. It’s always been especially in our house, with my wife being in it, it’s just a great thing to have as one of our main things we can do together. Now our daughters are in it.” 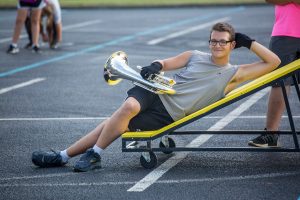 But to pull off a great competition, it takes a lot of work. And that’s where the community can help, Hill says.

“It helps me get out of my comfort zone so much,” Daugherty says. When she first started with band, she didn’t talk at all. “Band has helped me so much, I’ve made so many friends.”

Daugherty says band also helped her learn responsibility because of its regimented practices.

“It has helped a lot of people,” Aly Hill says. “We are children, after all — it’s helped us to be more disciplined. More kids should get into it.”

“We need volunteers to help with anything from selling programs to helping park cars,” Rob Hill says. “When we have a band of only 59 kids, even if every kid had two parents who could help, it’s still not enough people.” He says there are quite a few alumni helping to run the concessions.

“But things like hall monitors, people to help grill hamburgers and hotdogs” are duties still in need of able bodies, he says. Even if someone just wanted to donate funds for the band, that would help, too, he says.

People coming to watch the band perform, the two seniors say, means a lot, too. 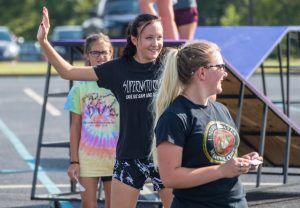 “It would be a huge support us. This year, it’s a smaller band. With more people coming out to watch, it would show off why people should come see us,” Aly Hill says.

After September’s showdown event, the Rebels will also host the 3A State Semifinals in October through the Kentucky Music Educators Association. Four bands out of 16 semi-finalists, will move on that night to perform at Kroger Field (Commonwealth Stadium) in Lexington.

“We hope we’re one of the bands who gets to go to Lexington and perform,” Hill says.

The Boyle County Marching Rebels Showdown will begin at “high noon” Saturday, Sept. 15, at Rebels Stadium. The cost of the event is still tentative.

The Marching Rebels will perform as the last band that day. The competition starts at noon, with finals beginning at 7:15 p.m., with bands who made it performing every 15 minutes. Since Boyle is the host band, they will not be included in it, but will close out the day with an exhibition show at 9:45 p.m. 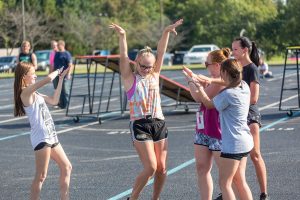 The schedule for the Boyle County Marching Rebels Showdown follows: 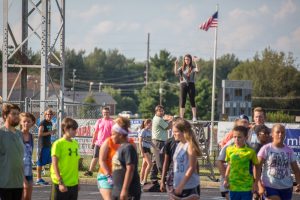 Anyone who would like to volunteer for the Boyle County Marching Rebels Showdown or donate to the band may call or (859) 951-6255 and leave a message, or email bcmbcomm@gmail.com.