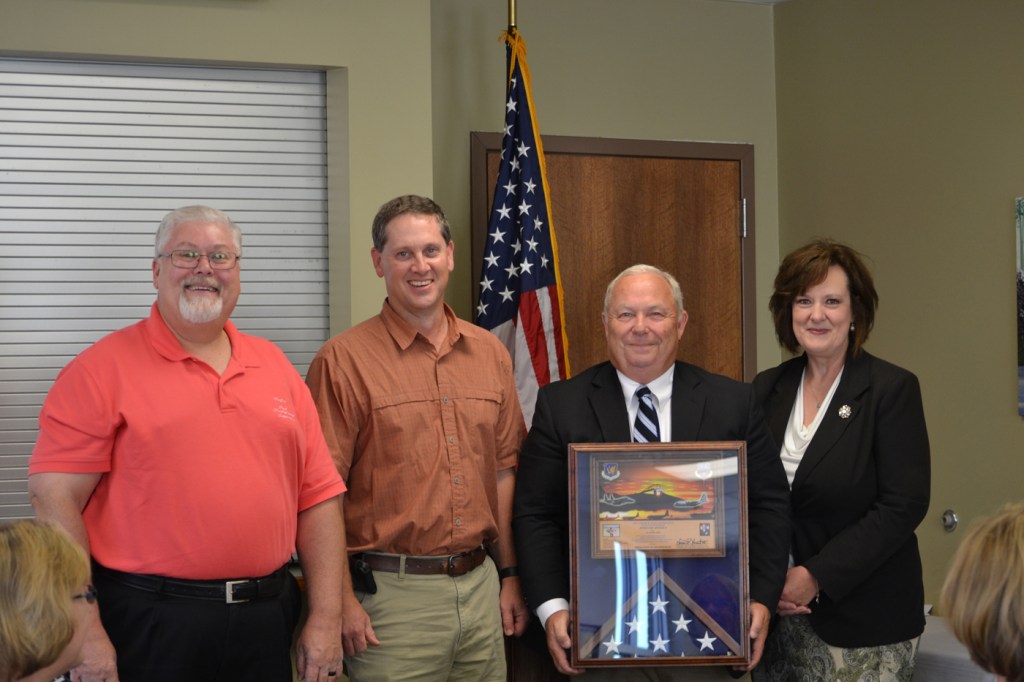 A Flag of Honor was presented to Heritage Hospice by by Howard Hunt, third from left. The others, from left, are David Overstreet, Darren Taul and Janelle Wheeler.

On July 17, 2018, Howard Hunt, Brigadier General (ret.), bestowed an American flag flown during Operation Iraqi Freedom to Heritage Hospice Inc. Hunt explained that “troops in Operation Iraqi Freedom were each afforded the opportunity to purchase American flags from small post/base exchanges that could potentially be flown by military aircraft over Iraq.” The flag presented to Heritage Hospice was flown over the hostile skies of Baghdad, Iraq, aboard Kentucky Air National Guard C-130 by the 485th Air Expeditionary wing on April 21, 2003.

“While I was in Operation Iraqi Freedom, I purchased nine flags, flown with the intention of providing me with the option of presenting a piece of history in the future to individuals, groups, or organizations that either supported me during my time in the desert or supported the military and veterans in an outstanding manner,” said Hunt.

Each year, Heritage Hospice hosts a Veteran’s Appreciation Day event, allowing veterans from World War II to current active duty military members to be celebrated together. Now in its eleventh year, the event draws in more than 1,000 veterans.

Veterans are also among those that Heritage Hospice serves. Providing compassionate care for patients and families during the journey through life-limiting illness is the mission statement driving Heritage Hospice forward.

“At the time the flag … was flown,” Hunt said, “I did not know the agency at all, but in subsequent years, their impact upon me and other veterans has been substantial, and the flag is a token of my appreciation for their work.”