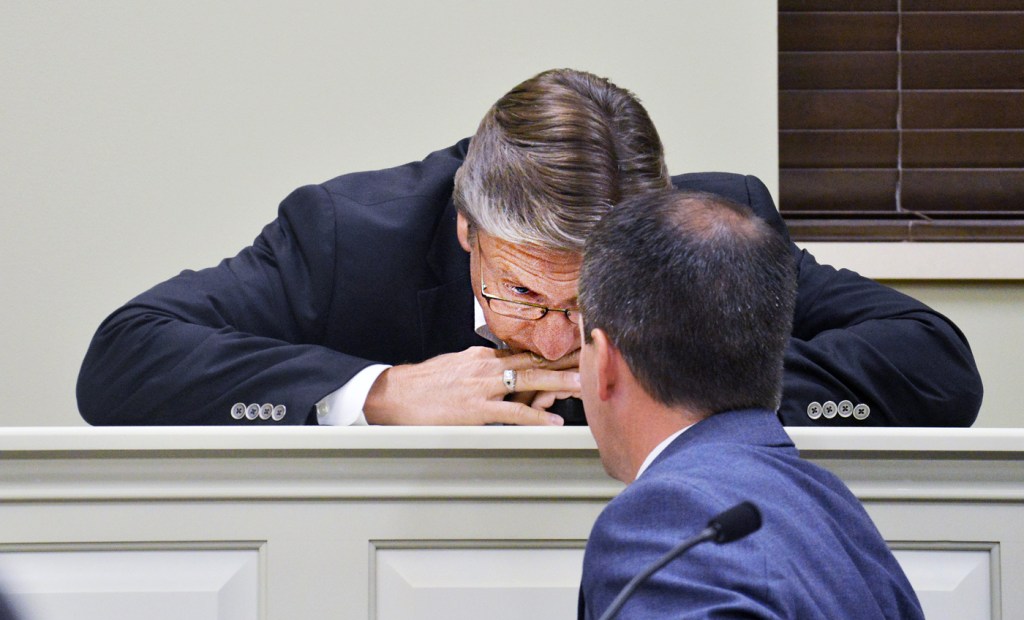 Danville Mayor Mike Perros discusses an issue with city attorney Stephen Dexter during Wednesday night's meeting when the commission approved the certificate of appropriateness for the Heart of Danville's contemporary mural. (Photos by Robin Hart)

A colorful, contemporary wall mural will be painted after all on a building in the downtown historic district following the Danville City Commission’s approval of the project at a special called meeting Wednesday night.

The city’s Architectural Heritage Board originally denied a certificate of appropriateness for the Heart of Danville’s mural project on Aug. 22, stating that it didn’t conform to the city’s public art guidelines.

Artist Andee Rudloff’s design for a mural that features unique aspects of Danville.

The Heart appealed that decision within three hours of the denial, arguing the AHB denied the certificate of appropriateness based “entirely on artistic preference” and “wrongfully denied based on a belief that the application for the COA meets all criteria set forth by the revised guidelines,” according to city attorney Stephen Dexter, who explained to city commissioners Wednesday night why the special called meeting was being held.

Dexter warned the commission not to let public sentiment sway their decision on whether or not the proposed mural by artist Andee Rudloff should have been approved for the side wall of the Derby Shoppe and Raggs building, which faces the Chase Bank parking lot on Third Street.

Heart of Danville board member Kate Snyder told the commission, “The question that seems to be the sticking point is … can contemporary art be successfully woven into historic communities?”

Snyder and Nick Wade, executive director of the Heart, gave a presentation showing murals in other Kentucky communities and talked about how the colorful works of art can help make a downtown vibrant. 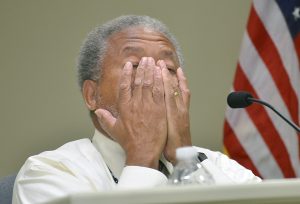 AHB chair Tom Tye spoke to the commission and explained why they decided to deny the proposed mural but first stated, “I’m concerned and somewhat saddened and disappointed that this has brought a certain amount of division in this community. This should be something joyful that we’re working on. It was never the intent of the AHB to cause this kind of division. We felt — and still maintain — we’re following the guidelines.”

The AHB oversees Danville’s historic overlay district, inside of which there are added restrictions on how the exteriors of structures can be repaired or maintained, in order to preserve the downtown area’s historic atmosphere.

“We’re charged as a board to protect the historical integrity of the district,” Tye said.

Dana Dixon, AHB member explained that the style of Rudloff’s art was inspired by “inner-city” artists who painted on dilapidated buildings “to instill hope and pride” in their communities. “These murals allowed the artists to express frustrations and uplift spirits for others,” Dixon said.

The proposed mural may seem to be derived from strife by some people visiting Danville “and is not compatible with Danville’s over-arching history of economic viability in leadership, in education, science and law. It would be in direct contrast of the ambiance that our visitors seek and property owners have invested to preserve.”

However, the mural, “with its vibrant color and light-hearted references to architecture and artifacts, its inherent optimism and participation — the proposed mural does belong in this community. To see this mural at a different location in Danville would be a true win for all,” Dixon said.

Following the formal presentations by the Heart and the AHB, several people in the crowd spoke to the commission, either in favor of the proposed mural or against it. 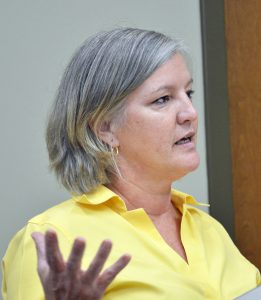 Dawn Nelson spoke to the commission against approving the certificate of appropriateness for the contemporary mural to be painted on the wall facing Chase Bank’s parking lot and drive-thru because of safety concerns.

Dawn Nelson spoke against the location, because of safety issues. She said having a colorful large mural that people would want to stop to ponder and admire could be dangerous because of the heavy traffic flow through the parking lot. She said people need to be focused on driving down Third Street because of traffic pattern changes at Main Street, when Third becomes one-way.

Jeff Thornton said he and his wife Karen have traveled abroad and have seen murals painted on walls “next to buildings older than Danville could ever hope to be.”

After the two-and-a-half hour meeting, Commissioner J.H. Atkins made a motion to approve the mural’s certificate of appropriateness, which was seconded by Commissioner Rick Serres. After more discussions about the particulars of the upkeep of the mural and specific design alterations, the board unanimously approve the COA.

“I want to thank the Architectural Heritage Board for their work and their interpretation of the guidelines as we put before them. … They did their job. Also my estimation tonight brings out very clearly that we’ve got work to do” on revising the guidelines, Mayor Mike Perros said.

Perros also urged everyone in attendance “to take the opportunity to thank the Architectural Heritage Board for all the time and effort that they put into this and putting their best foot forward. And thank the Heart of Danville who followed the process.”