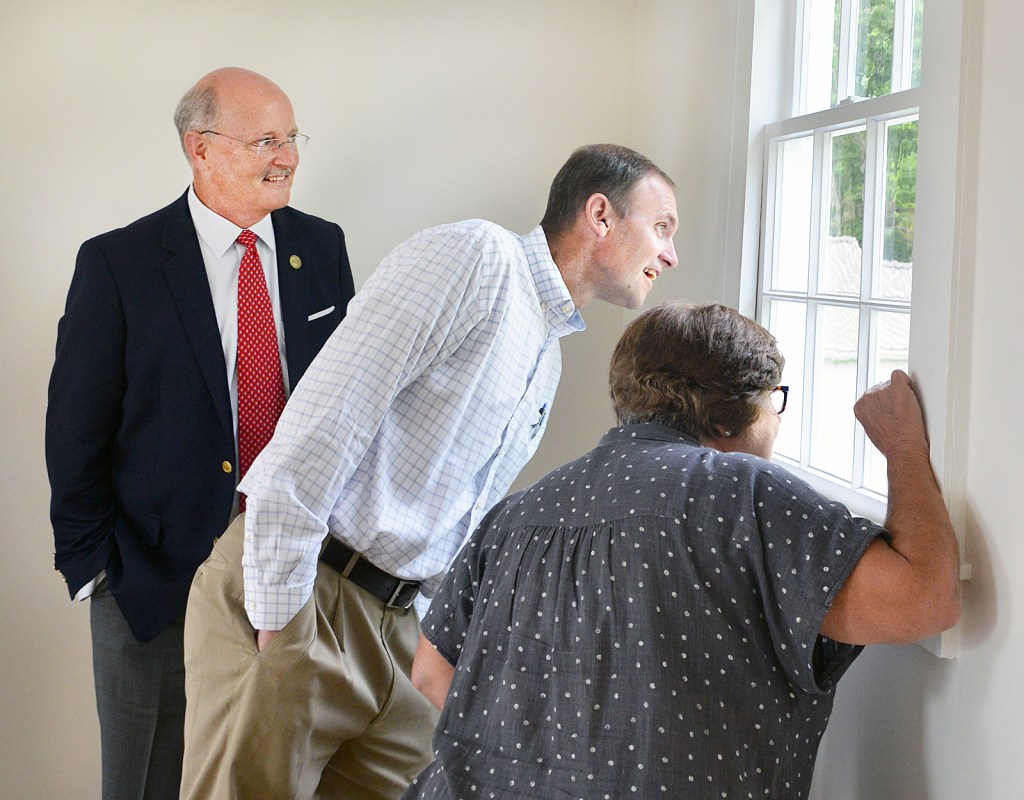 Main Street Perryville will be moving into its renovated office space in the Johnson-Britton House later this month, thanks in part to money raised during its capital campaign to restore the historic property.

The campaign began in February of this year and $12,750 has been raised so far, according to Main Street Perryville Executive Director Vicki Goode.

Because Farmers National Bank is a strong supporter of Main Street Perryville and its endeavors to save historic properties on Merchants Row, bank officials promised to donate $5,000 over the next three years as matching funds, Goode said.

Wednesday morning, representatives from Farmers Bank presented a check to MSP for $1,500 as this year’s matching funds contribution. In 2019, Farmers plans to donate another $1,500 in matching funds and in 2020 it will give $2,000.

Bank CEO Greg Caudill said, “We are strong supporters of Main Street Perryville. Their hearts are in the right place.”

Caudill said he toured the house before restoration began and knows how dilapidated it was. On Wednesday, Caudill said he was very glad to see the progress of the restoration. Wide-plank poplar flooring — some of it original — was smooth and glowing; thick walls have been plastered and original wide moldings and trim around windows and floors now have a fresh coat of white paint.

“This is the first time there’s been electric in this building in 30 years,” Goode told the group who was touring the property.

“It just goes to show what willpower and determination can do even when funds are tight,” Caudill said. 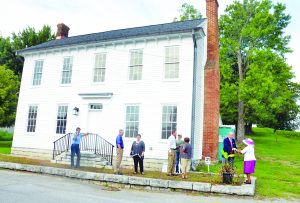 Photo by Robin Hart/robin.hart@amnews.com
Wednesday morning in front of the Johnson-Britton House, Farmers National Bank officials met with Perryville representatives before officially giving Main Street Perryville a check fo $1,500 in matching funds as part of its promise to support the organization’s capital campaign.

About $179,000 has been spent restoring the house, Goode said. That work includes putting on a new roof, updating plumbing and wiring the house.

Not only will the Johnson-Britton House be the home for MSP, the three other rooms will contain a small museum; a genealogy library and a Perryville Civil War library, which will be open seven days a week for the public to use. Mondays through Saturdays, the house will be open from 9 a.m. to 4 p.m. and on Sundays from 1 to 4 p.m. Goode said.

Work on the Johnson-Britton House, built in 1839, began full-force in June of 2017, Goode said. However, initial work to save the structure began in 2002 when the building’s foundation and walls were stabilized; some of the flooring had to be removed at that point, but wasn’t salvageable. The house sat empty for the next 15 years, Goode said.

Main Street Perryville was finally able to get the restoration project started in 2017 when it raised $79,000 from the sale of the Bond House and Mill on Ky. 68, Goode said.

Now with the capital campaign in full swing, Main Street Perryville has plans to continue restorations of four more properties it owns, including The Opera House, Karrick-Parks House; Dr. Polk’s office and home; and the Parks Store.

Main Street Perryville is continuing with its capital campaign drive and anyone is welcome to donate Goode said.

MSP is hoping to move into the Johnson-Britton House in mid-September. All that is left to be done before then is to set the plumbing fixtures and add one piece of gutter, Goode said. They want to be settled by Oct. 6, when the Perryville Battlefield commemoration weekend is held.