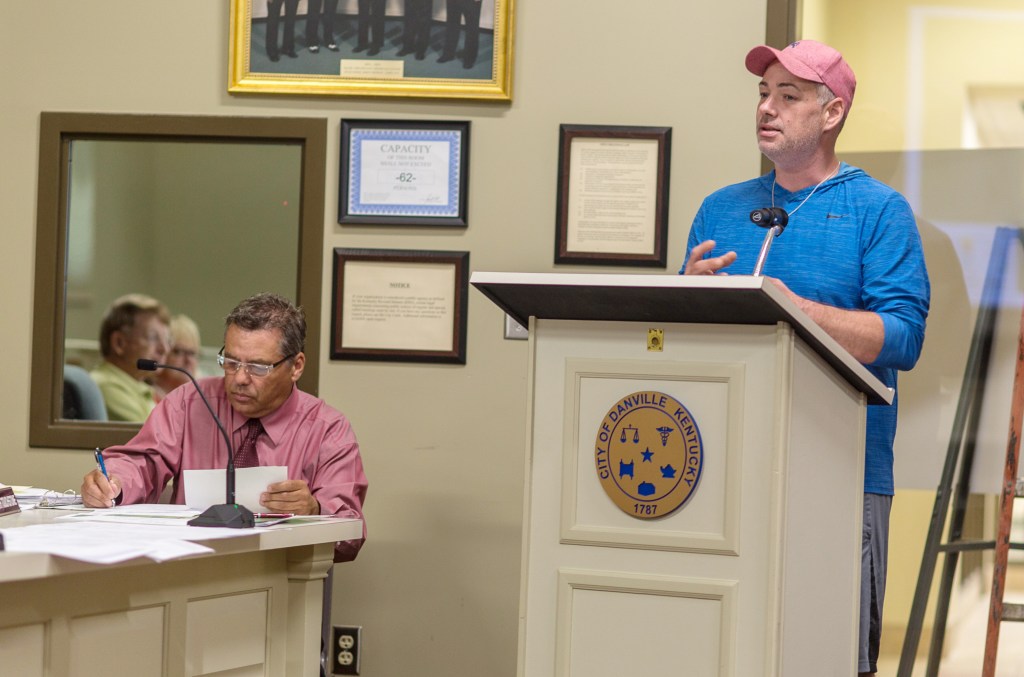 Ben Kleppinger/ben.kleppinger@amnews.com Perryville City Council member Paul Webb, right, talks about the efforts of a special committee to develop a rezoning plan for Perryville that garnered the support of 129 signatures. At left is P&Z Director Steve Hunter.

A funeral home director in Perryville has the OK from planning and zoning to construct a crematorium and a parking lot next to his funeral home. But that approval is contingent on Perryville City Council approving a large-scale city rezoning involving more than 120 properties.

The Danville-Boyle County Planning and Zoning Commission approved David Walden’s site plan for a crematorium 5-0 Wednesday, after a lengthy and at times contentious public hearing. Multiple Perryville residents said they were concerned the crematorium would cause pollution or “hazardous waste.” They also said they didn’t like the proposed location, in the middle of many residential properties.

Steven Walker, a Perryville resident, argued zoning regulations prohibit “hazardous material and/or toxic waste disposal sites” within 1,000 feet of residential properties. The emissions from a crematory should qualify as hazardous materials, he said.

P&Z Director Steve Hunter said after Wednesday’s marathon meeting that if dead bodies were to be considered hazardous materials, it would potentially create a lot of problems for funeral homes everywhere.

During the meeting, Walden defended his plan to expand his business. He said some have unfairly characterized his plans as being harmful to Perryville and accused him of not caring about the city.

“I have been an excellent business partner with the City of Perryville since we came in 2015,” he said, listing off the various ways his funeral home has contributed financially to Main Street Perryville, city endeavors, school field trips and more. He also revealed himself to be the anonymous donor who gave $500 so Perryville could have a voting seat on the Danville-Boyle County Economic Development Partnership board. “I love Perryville. I love the small-town environment. I love walking around town; I love being involved in the town; and I love being there. My home is in Danville, but I spend more time at my business than I do at my home anyway.”

Walden said his family still intends to ultimately move to Perryville. “Why would I support the city and its activities if I wanted to do something that would harm children?”

Walden said cremation is now a more popular option than burial in the U.S. and around the globe, and the popularity of cremation is continuing to rise. That’s due to many factors, including the fact that cremations are up to 30 percent cheaper than burials and changes in how “Millennials and Gen-X’ers” think about death and funerals, he said.

The National Funeral Directors Association projects that cremation will be preferred to burial 79 percent to 15 percent by 2035, Walden said.

“How am I going to stay in business if I don’t offer a crematory to the 79 percent of families that choose cremation?” he asked. 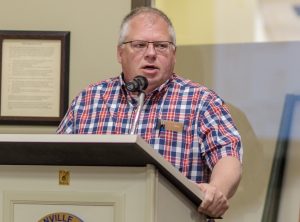 Ben Kleppinger/ben.kleppinger@amnews.com
David Walden speaks about his plans to build a crematorium in Perryville during a public hearing before the Danville-Boyle County Planning and Zoning Commission Wednesday.

Multiple Perryville residents spoke at the hearing in favor of Walden’s plan, explaining they want to see more small businesses come to the city and don’t want to discourage growth.

Walden said modern crematories do not emit visible smoke or particulate matter, in part because smoke from cremation is trapped in a second chamber and incinerated. Crematories emit some chemicals, such as mercury, but in such small amounts that it “pales in comparison” to other everyday sources — a broken fluorescent light bulb, for example, emits more mercury than a crematory does over the course of an entire year, he said.

Walden said one complaint he’s heard is that residents don’t want to be in their neighborhood, “hearing the crematory operate.”

Melanie Carter, another Perryville resident said she called Walden after hearing about the plan so she could be better informed. She was grateful for his explanations, but still concerned about having to say she lives in a neighborhood with a crematorium.

Carter commented about two hours and 45 minutes into the P&Z Commission’s meeting, after she and others interested in the crematorium public hearing had waited through essentially all of the rest of the meeting agenda. She used some of her time to thank the commissioners for doing what they do.

“How do you do this all the time?” she asked. “Because honestly, these are so boring — these meetings. Terribly boring.”

But the approval came with a caveat: It’s dependent on final approval of a proposed zone change for a sizable chunk of Perryville — a decision that will be made by Perryville City Council.

Prior to the crematorium hearing, the P&Z Commission recommended the zone change to Perryville City Council for approval.

The P&Z Commission itself was the applicant for the project, which would rezone more than 120 parcels of land in Perryville, to bring them in compliance with current usage and the future land use map.

Under current zoning, there are some residential properties zoned for agricultural use; some farms zoned residential; even some properties that fall into more than one zone at the same time, Hunter said.

“The goal was to fix all the problems we could fix in one big swoop,” Hunter said. “It was pretty painstaking because, again, it’s 150 properties.”

The proposed rezoning adds numerous properties in the downtown area to the “downtown” zone, a flexible zone that allows for residential and small commercial uses, but not big commercial or industrial uses, Hunter explained. Other properties around town are reclassified as residential.

Anyone who didn’t want to participate in the project was left alone — Hunter said only those who agreed to a zone change were included in the proposal. After the final draft of the zone change was complete, however, some backed out and said they wanted to remain in their current zone. That meant there needed to be an amendment to the plan as proposed to leave five properties unchanged.

Paul Webb, a Perryville City Council member who sat on the committee that came up with the plan, said he spent a week walking door to door, gathering signatures and trying to make sure anyone who chose to participate was as accurately informed about current and proposed zoning as possible.

“When we started this project … our heart was that Perryville was small, and we wanted to keep that feel,” Webb said. “Before we even started looking deeply into zoning, we wanted to make it clear that we want the small-town feel, we want to be able to preserve some of the history there. And we didn’t want to make any people do anything they didn’t want to do.”

Webb said the strong majority of property owners signing onto the plan shows there are a lot of people in favor.

“We kept to the promise that this was an opt-in for the citizens and not a forced thing,” he said.

Now that the P&Z Commission has recommended the zone changes, Perryville City Council must decide whether to formally adopt the changes, Hunter said Wednesday after the meeting. That requires P&Z sending a formal recommendation to Perryville, after which city attorney Winfield Frankel will likely have to draft an ordinance for the city council to consider, Hunter said.