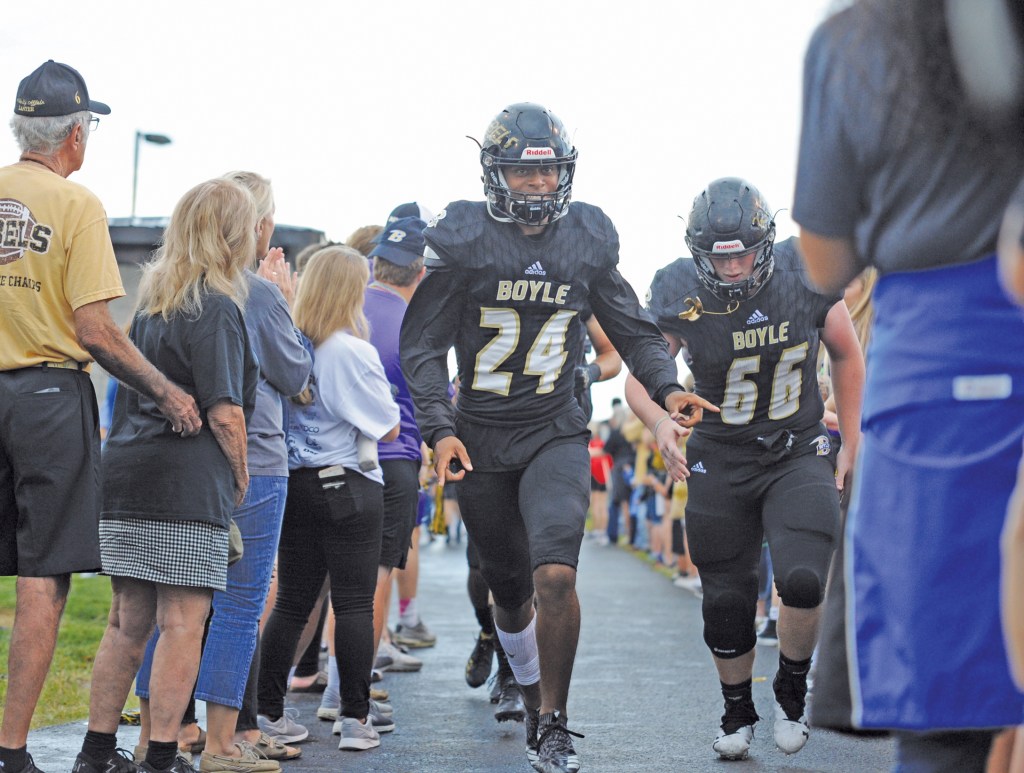 Boyle County will get its first “true” road test of the season on Friday against Wayne County.

The Rebels will take the 90-minute drive to Monticello to face the Cardinals (2-1), who will provide Boyle with a unique challenge.

“This is what it’s going to be like, everything we do is going to have to be on the road in the playoffs,” Boyle head coach Chuck Smith said. “It’s going to be those kinds of trips, going to a Belfry, traveling on the road to a Corbin or where have you. This will be good practice, a good opportunity to see what it’s like to take a long bus ride and then get off the bus and play.”

Boyle was a winner in last year’s game, 38-14, and the Cardinals didn’t lose again until the Class 4A State semifinals.

Smith expects a challenging game from Wayne again this time around.

“Last year they gave us everything we wanted,” he said. “This year, they’ve got the same kind of team. They’re a really well-coached football team. They do a nice job with those kids, and the kids play hard. They’re scrappy, they play with the attitude that they’re going to win the football game. They’re just well coached, well prepared. We’ve got to be ready to go.”

Wayne County is a balanced team — Cardinals’ quarterback Brody Weaver has 71 passing attempts and the Cardinals have 103 rushing attempts as a team.

Weaver has completed 28-of-71 passes for 384 yards to go with four touchdowns and four interceptions.

On the ground, Wayne is led by Carson Simpson, who has 257 yards on 52 rushing attempts and one touchdown. The team has scored six times on the ground.

The Cardinals also get it done with big plays on defense, with three fumble recoveries and four picks.

Boyle will have to take another step after a rivalry win over Danville last week — a game where Smith said his team learned from its mistakes early on.

“I thought that we were a smart team in the Danville game,” Smith said. “They ran a couple plays on us that we had not practiced or we hadn’t seen them run in games before. They got us on the first time, the second time we were a smart football team and fixed mistakes and were able to stop it the next time they ran it. I was really pleased with our defense in terms of being smart on the field during the game. I think that’ll carry us a long ways.

“Overall, I think our guys played hard, they played ready to win, wanted to win. We started the game off a little slow, we didn’t do a really good job at the beginning of the game.”

Smith said two players — Reiley Colwick and Ned Stephens — stood out to him on the film from last week.

“The last game, Reiley Colwick really stuck out and played really well,” he said. “He came up with some big plays and changed the game in our favor several times. I think Ned Stephens has really played well for us as an offense and now he’s playing defensive line too, he’s been the leader of our football team so far.”

Colwick is second on the team with 11 receptions for 120 yards, both behind Reese Smith (20 catches, 353 yards, two touchdowns). Colwick also returned a punt for a touchdown against Danville.

The Rebels have done a great job with turnovers so far this year, averaging three per game: Boyle has five interceptions and four fumble recoveries.

Coach Smith wants his team to take another step forward and improve to 4-0 this week.