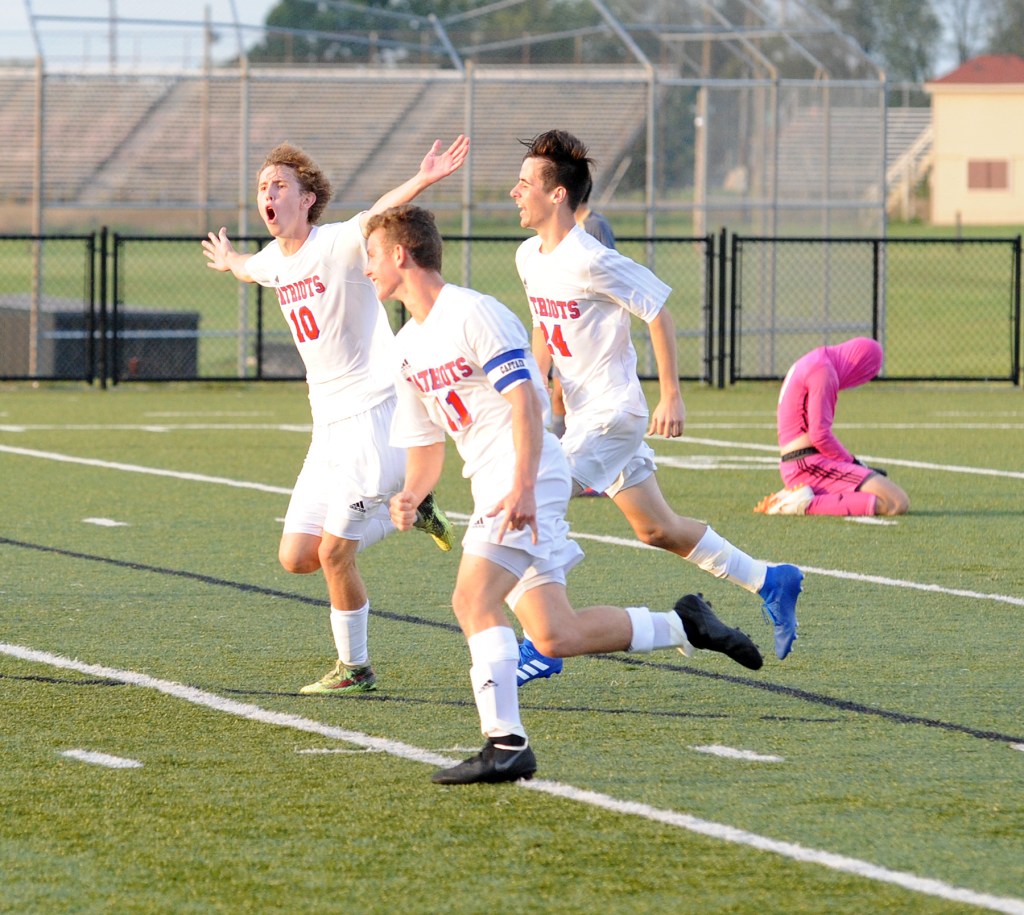 That ended — almost three years to the day — on Thursday after Cummins scored three goals and assisted another as the Patriots won at Boyle 4-0.

“I was very proud of the way we played, very hard for 80 minutes,” Lincoln head coach Lewis Cummins said. “I was proud of them because they didn’t let up at all. They knew if we did, Boyle County has a good team and will send numbers at us.”

The game was scoreless until the final moments of the first half, when Lincoln County was awarded a free kick in Boyle’s half with 32.3 seconds left.

As players were lining up for the free kick, Boyle County’s Gabe Hodge was issued a red card for inappropriate language. The referee added 62 seconds to the clock after the card — putting 1:35 on the clock.

Nothing happened on the free kick — Trey Cummins’ effort sailed over the Boyle goal — but it wasn’t long until the Patriots got on the board.

Trey Cummins stole the ball from Boyle goalkeeper Ethan James and scored the opening goal with just seconds left in the first half.

In the final two minutes of the first half, Boyle was down to 10 men and gave up a goal.

“That red card given to Gabe and then the goal afterward, I think that was pretty frustrating,” Boyle County head coach Cris McMann said. “Then they just added time back to the clock and we didn’t really know why. I think that frustrated the guys a bit.”

Boyle didn’t give up, and McMann said he thought his players gave great effort, but Lincoln’s gameplan worked well through the second half.

Lincoln would score again 12 minutes into the second half after a freekick at midfield from Trey Cummins: He placed the ball in the box and forward Hawk Randall slid the ball into the net for the second goal.

He scored on an open net as Boyle was preparing for a free kick outside the box, with the Rebels arguing they called for 10 yards before the kick and were unprepared. The referee disagreed and allowed the goal.

The final goal of the game would be a penalty, when Randall was brought down in the box and Trey Cummins scored his hat trick.

“You could see, playing with 10 guys, I think we got tired,” McMann said. “Lincoln County did a good job exploiting that one extra man. They’re a pretty good team too, they moved the ball around and they’ve got some fast, athletic guys. They did well.”

Coach Cummins said that his team did well to remain focused, no matter what the scoreboard showed.

“We kind of learned our lesson against West (Jessamine), we kind of dropped our heads,” he said. “But we know that the game’s not over at that point. Hopefully they learned a lesson that game.”

The coach said that his son, Trey, was exactly what he wanted and expects more of the same as the season progresses. Lincoln now has a vital game against Danville next week that will determine the top seed in the 45th District tournament.

“Especially against a quality team like Boyle, it was a great game for Trey,” Coach Cummins said. “Hopefully we can do that the rest of this year. We talked to the boys about this being the biggest game of the season. Now that this game is over, (Danville) is the biggest game of the season, going for the one seed. That’s very important for both teams.”

Boyle County’s on the other side of the spectrum. The Rebels are 0-2 in district play and will play Garrard County later this month to determine the No. 3 and No. 4 seed.

“We’re struggling. We’re making some funny decisions, I think,” McMann said. “But guys that normally have a really good first touch aren’t right now. Guys who are normally passers, they’re having a hard time completing passes. We’re struggling. We’ve just got to keep working at practice and try to fix it.”

McMann said practice on Wednesday was what he wanted to see from his team, but that same intensity didn’t show against Lincoln.

“Yesterday’s practice was great. There was a lot of energy, a lot of intensity,” he said. “I didn’t think we were playing great at the beginning of the game, but I felt like we were controlling it. We were playing better than we have in the past couple of games.

“I thought if we came out fighting (in the second half), we had a chance. I’m not discouraged by our effort, I think they were working really hard. We just didn’t get very good shot opportunities. We needed one better touch, one better pass and it just wasn’t there tonight. You have games like that. I’m going to talk to them, tell them there’s still a long ways to go. If we beat Garrard, we’ll be playing (Lincoln) again in districts. We’ve got time to fix things.”