A burning debate: Arguments for, against crematorium in Perryville get heated 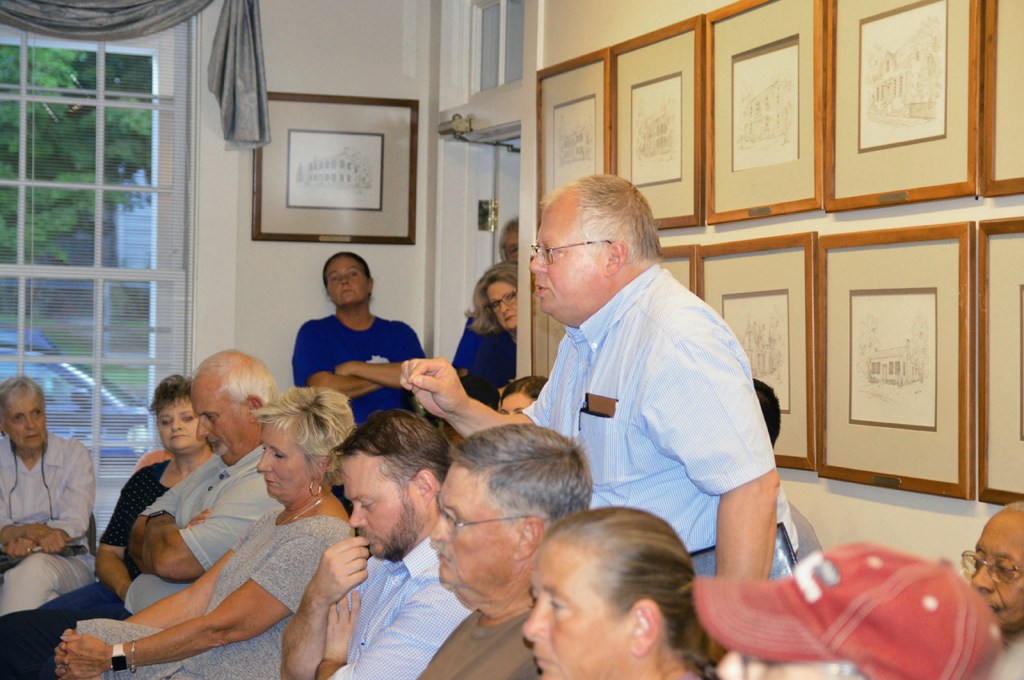 David Walden said he apologizes for getting upset during Thursday night’s Perryville City Council meeting. He’s referring to some passionate exchanges with residents over the topic of building a crematorium in a lot next to his funeral home on South Bragg Street.

Although on Wednesday he received unanimous approval on the site plan from the Danville-Boyle County Planning and Zoning Commission, it’s dependent upon city council approving a city rezoning project that involves more than 120 properties.

Walden Funeral Home is actually zoned residential, but because it has been an operating funeral home for the last 93 years, it was grandfathered into the current zoning plan. Some residents say they are concerned about toxic pollutants from the process of cremation getting into the air, because it’s located so close to homes.

The subject was on the agenda for the open discussion segment of Thursday’s meeting, but Mayor Anne Sleet eventually put her foot down and said the conversation was “snowballing” after about 40 minutes’ worth of back and forth, and she was not going to stand for “hurtful things” being said. The council decided to bring the topic back up when more information could be relayed.

Walden plans to do just that on Sept. 18, offering a “cremation seminar” at Walden Funeral Home, and he invited the city council and any residents to come who are concerned about the new addition to his business — an addition he says is simply to keep up with the times.

“If we want to stay open and continue to operate 30 years from now, it’s a service we need to offer,” Walden said Thursday night. He explained how cremation is becoming more and more common, not only due to personal beliefs, but because it’s significantly cheaper than burials. Younger generations also have a much different viewpoint and tend to stray from traditional funeral plans, he said.

Walden spoke via phone Friday, explaining he meant no disrespect to citizens when he may have raised his voice Thursday night during the meeting — he realizes they are concerned about things like air quality and property values. But, he said he is passionate about continuing to operate a business inside of Perryville, something the next generation of his family plans on keeping alive and lucrative. And he simply would like for residents to understand exactly what the cremation process is like — there is no smoke emitted into the air; it’s trapped and incinerated within a chamber.

He did say Thursday that crematories emit minute amounts of certain chemicals, like mercury, but said — “You can go to Kroger and get a swordfish steak and cook it, and it emits multiple times the amount of mercury that a crematory does.” As he told P&Z members Wednesday, a broken fluorescent light bulb also will emit more mercury than a crematory does — over the course of an entire year.

Friday over the phone, Walden said he already has letters of intent from 10 different regional funeral homes who say they will do business with him when the crematory is functioning.

Resident Steven Walker spoke Thursday, an avid opponent of the plan who said he was “surprised” P&Z approved a crematorium in such a place and found the commission’s decision as “unsound,” and referenced a part of the zoning ordinance he feels proves that. He claims the commission “chose to disregard its own regulation,” in that he believes the proposed crematorium is a “hazardous material site” under the meaning within the ordinance.

P&Z Director Steve Hunter spoke up to clarify the commission’s responsibility, and said he is vested to make interpretations of the ordinance through Kentucky law; his interpretation of the said regulation applies to toxic dumps and sites, he said. Furthermore, P&Z has no authority over air quality control, he said.

Both Hunter and Walden pointed to the fact that unembalmed bodies are buried in cemeteries every day, emitting toxins, and Walden added the funeral home was the site of embalming bodies “every day for the last 93 years with known carcinogens.”

Hunter told the council he hoped “the rezoning plan didn’t hinge on one project — it was really about a lot more stuff, a lot of residential properties that were converted that were zoned agriculture,” he said, for example.

Walden also told the council and residents that he had gone through the rezoning and council approval process out of respect for the city; he could simply operate the crematory within the existing footprint of the funeral home without even needing any approval, he said.

On Friday, Walden said he had put a “for sale” sign on the lot at 211 S. Bragg St. due to the uproar about the crematory.

“If it sells, we will move the crematorium,” Walden said. “I went through the steps I did because I am not a fighter.” He said he’s heard through the grapevine of at least one citizen who has said they are threatening to sue if Walden goes forward with building the expansion to offer the cremation services.

“If I decide to move the crematorium somewhere, it will be within Boyle County, but it would not be within the city limits” of Perryville, Walden said. “Which is really sad, because I think it would bring more business here.”

David Walden will hold a “cremation seminar” 7 p.m. Sept. 18 at Walden Funeral Home, at 207 S. Bragg St. in Perryville. He said he will explain as much about the process as the community is interested in hearing, and will answer any further questions.