Danville native Frank X Walker graduated from Danville High school, and he entered the University of Kentucky with a plan — but it took a professional turn when he decided to follow his dreams and write, instead. Walker will return to Danville the week of Sept. 17th to take part in a festival named after him, organized by Citizens Concerned for Human Relations (CCHR).

Today, Walker’s resumé includes a lengthy list of awards and honors for his work as a poet who incorporated his writing talents and his commitment to cultural diversity and inclusion. He was named Kentucky Poet Laureate, a Kentucky Arts Council Al Smith Fellow, has received honorary doctorates from two universities, has lectured nationally and internationally and served on countless boards and commissions. He is a founding member of the Affrilachian Poets.

Each year, Walker returns to Danville for the Frank Walker X Walker Literary Festival to share his vision with students and the community. The organization sponsoring the festival, CCHR, is a group of people committed to offering a variety of activities for the community throughout the year. This year, the group has focused on the legacy and lessons of Martin Luther King Jr., in recognition of the 50th anniversary of his assassination in 1968.

The 2018 Frank X Walker Literary Festival will include several activities and opportunities for community participation during the week of Sept. 17-21.

“The Meeting,” a play by Jeff Stetson, will be presented by The Message Theater at 7 p.m. Sept. 20 at Danville High School’s Gravely Hall. The performance is open to the public. Area students will also have the opportunity to attend the play earlier in the day. Tickets for the public performance are available at Gravely Hall in the evening, with a suggested donation of $5 for adults and $2 for students.

“The Meeting” is a critically acclaimed drama imagining what Martin Luther King and Malcolm X would have discussed if they had met face to face during their very public lives. The conversation develops around the philosophies each man held and which guided their life choices and expressions of their beliefs.

The role of Dr. King will be played by Whit Whitaker and Patrick Mitchell will portray Malcolm X.  Danville Police Chief Tony Gray will appear as the bodyguard. Walker will introduce the play and conduct a follow up discussion. 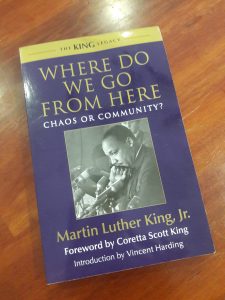 CCHR is also coordinating book reading opportunities for local classrooms. Community volunteers will visit area schools during the week of Sept. 17 to share books which tell stories of diverse cultures and people. People interested in participating in this project may contact jane.dewey@danville.kyschools.us for a list of days and times volunteers are needed.  Classroom teachers have selected books which are age appropriate and support the goals of the festival.

In conjunction with the observance of the MLK 50th Anniversary, CCHR is sponsoring a community book read of Dr. King’s last book, “Where Do We Go from Here, Chaos or Community?” You can obtain a free copy of the book at the Boyle County Public Library on Sept. 25 from 10 a.m.-5 p.m., and on Sept. 27 from 1-5 p.m.

CCHR has also planned a variety of discussion group sites and leaders during the week of Oct. 14-21. Community members may sign up for a group at the time they pick up a copy of the book.

The community book read project was made possible by donations from community members.  Two classes at BCTC will be participating with the additional support of the faculty and administration of the college.