There are several local options available to families who want an alternative to sending their children to public schools. Classical Conversations is one such option in Danville. It’s for home-schooling families who want to follow the classical method of educating students in a Christian community.

Melissa Sirasky, a mother who home-schools her three children with this program, said the classical method of teaching was “the primary method of education in the United States until around the 1920s.”

She added that the classical model focuses on teaching students how to learn “and has proven effective for centuries and has cultivated great thinkers and leaders from Aristotle to Thomas Jefferson.”

“It’s a shift from what most of us are familiar with,” Sirasky said. “You don’t need expensive resources. The guide, a pencil and paper is all you need.” 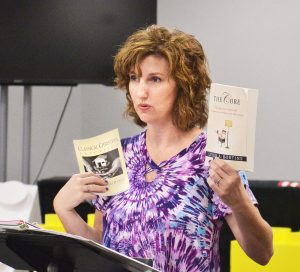 Photo by Robin Hart/robin.hart@amnews.com
During the opening of a class day, Carie Faulkner, director of two of Classical Conversations’ levels shares two books available to parents to help them learn how to better teach their children at home.

Families who join the Classical Conversations home-school program follow a special guidebook while school is in session and adhere to a specific curriculum that’s the same for students in kindergarten all the way through 12th grade. However, the lessons are age appropriate, Sirasky said. This is especially helpful for families who have more than one student enrolled, Sirasky said.

For example, one day last week, the 5-year-olds were memorizing the prepositions “along, amid, among, around, at, atop,” using hand motions with each word. Even though they didn’t understand the meaning of the words, they were being imbedded in their memories, Sirasky said. “They’re like little sponges.”

In a classroom nearby, older students were given more information about the meaning of the words. As they practiced memorizing the words, they chose funny motions, such as peck like a chicken, to act out while saying the prepositions. More advanced students used the prepositions when writing sentences. 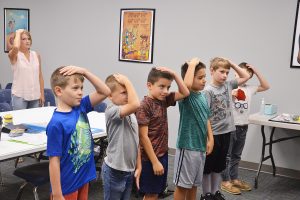 In the grammar stage, elementary-aged children are developing their knowledge which are the building blocks for all learning. The dialectic stage takes advantage of the time when children begin to question the world around them and are curious about why things are a certain way.

The rhetoric stage is when high school students use their educational foundation to process information. This allows them to take ownership of what they’ve learned and be creative with their own opinions and ideas. By this time, students can also express themselves well, Sirasky said.

“We all experience this pattern of learning when we learn anything new in any area of life, be it a skill, sport, foreign language or new job. We first become familiar with a subject by learning its basic facts and terminology. 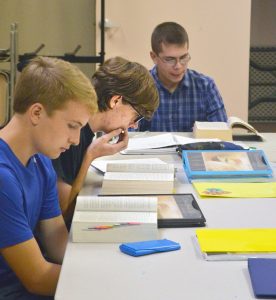 “After we have a general grasp of the topic, we can then begin to process that information and develop a deeper understanding of the subject. Finally, after much practice, experience and wrestling with concepts pertaining to the subject, we develop ownership and proficiency in whatever it is we set out to learn, and we are then able to import that wisdom to others.”

Sirasky said memorization of facts is a child’s first step in learning. The teaching method shows students how to think well, use logic and organize their thoughts. This will eventually lead to students being able to write well and be good communicators.

“We want to do those things to develop life-long learners and be equipped to handle any issues,” Sirasky said.

Classical Conversations isn’t a faith-based method of teaching, Sirasky said. But it does use a biblical overview of the world and recognizes God as the creator of all things, including grammar, math, science, biology and the arts.

In addition to following the classical method of teaching and learning at home, students and their parent(s) also meet twice a week at Indian Hills Christian Church to go over lessons and develop a sense of community. Several parents are trained to lead class instruction, and parents are asked to attend classes too so that they’ll know how to instruct their children at home.

“This is not a drop-off program,” Sirasky said.

In math class, several 4-year-olds practiced reciting their numbers by threes. It’s called skip counting, Sirasky said. This knowledge will be helpful when the students begin learning the multiplication table, she added.

In the Classic American Literature class, students discussed the similarities and differences between the books “Call of the Wild” and “The Witch of Blackbird Pond.”

The teacher/parent, Meagan Howland, comes from Jessamine County to participate in the class. She said every week the group talks about an assigned book. During summer break, students have a reading list to complete before school starts back up. It’s nearly impossible to read a long, in-depth book every week, so they need to get a head start during the break.

Keifer Howland said he likes the freedom of being homeschooled. He can help his dad at home, and still be able to do his required classwork. He said being home schooled, he’s learned responsibility and time management. “It’s up to you. The school is really your job,” he said.

High-schooler Teagan Fowlkes is new to Classical Conversations this year. She said she likes the close-knit group, and there’s no trouble with discipline issues.

Oliver Lee said she feels very prepared to take the ACT and Latin classes has absolutely prepared her for college.

Outside of the building, two classes of older students were working on two science experiments: one involving ground temperature and a second one demonstrating camouflage in nature.

Sirasky said, “The main goal is to help students learn the scientific method. All science follows a method.”

Walking down the hallway, Sirasky said, “We, our parents and students, do life together. We are a team. We work together, we wrestle through parenting and life issues together, and we support encourage and learn from one another on our journeys. We believe that the practice of education is most fruitful in a supportive community.”