Danville comes up short against Pulaski, 30-14 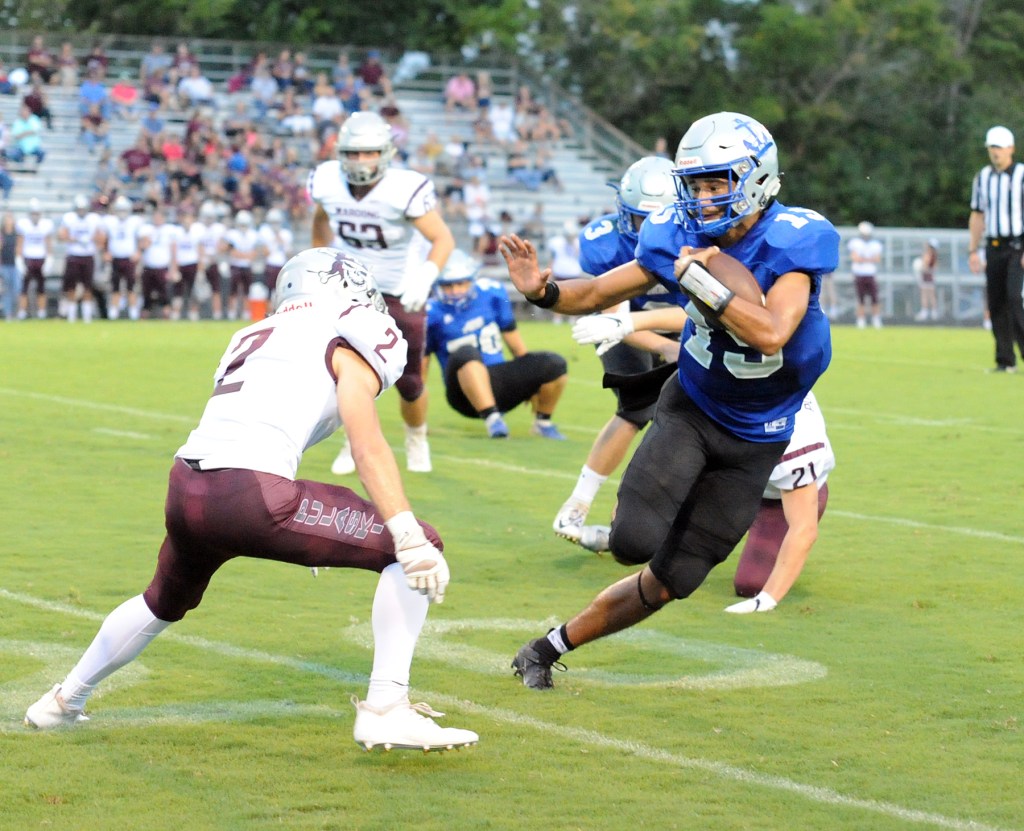 Intensity wasn’t there for the Danville football team Friday against Pulaski County.

The Admirals fell to the visiting 5A Maroons 30-14 after a strong performance through the air by Pulaski quarterback Wiley Cain.

Cain was just part of a dominant Pulaski offense that kept the Danville defense on the field — and the Admirals’ playmakers on the sidelines. The Maroons had 50 more offensive plays than the Admirals (87 to 37) and gained 437 total yards to Danville’s 185.

“You can respond and keep working or you can feel sorry for yourself,” Danville head coach Clay Clevenger said. “That’s really what it boiled down to. Pulaski came out and got on us and I felt like we didn’t have near the intensity that we had last week. We don’t have the overall skill to be able to play lackluster and still make big plays. We’re going to have to come out and execute, play hard every single snap. Because our margin for error isn’t as big as what it has been the last few years.”

Danville’s opening drive was a three and out, and Pulaski responded with its first long drive of the night, scoring on a one-yard run by Tristan Cox midway through the first quarter.

On the Admirals’ next possession, quarterback Zach Thornton had a snap fly over his head and into the end zone. He recovered but was tackled for a safety, putting the Maroons ahead 9-0.

But Danville would get a break on the next drive, when Kishon Bartleson recovered a fumble in Pulaski territory. That short field set up the Admirals’ first touchdown of the game, a one-yard keeper from Thornton.

It was 9-7 after one quarter, but Pulaski’s methodical air attack kept the Maroons in control of the game.

Jake Sloan caught two touchdown passes — the first on a fourth-down goal line fade, the second from 68 yards out — to put Pulaski on top 23-7.

Thornton and Brennen McGuire would link up on a 52-yard touchdown pass with two minutes left in the first half to cut the Pulaski lead, 23-14.

But that’d be the best offense for Danville all night, as the Admirals wouldn’t score in a draining second half.

“Really, I feel like we played a little better defensively in the second half,” Clevenger said. “I just felt like we could never get stops there in the first half, we were just playing flat-footed defensively … We’ve just got to figure out how to get some points, get the ball moving and get some juice off of that. We’ve got to get better, really, in every facet of the game.”

Thornton completed 6-of-13 passes for 90 yards and two interceptions, while McGuire was Danville’s leader in yardage with three catches for 73 yards and the score.

Danville struggled to move the ball on the ground, gaining 95 yards on 24 carries. Thornton led the way with 11 carries for 53 yards.

Pulaski had 37 plays in the second half, down from the 50 in the first half. But that’s as many as the Admirals had all game.

“That’s (our defense’s) own fault because we can’t get off of the field,” Clevenger said. “That’s been a problem all year really, anybody throwing the football well has given us problems. Really 3rd and 10 is the best play to have against our defense right now. We try to bring some pressure, bring a blitz, and we don’t come or we don’t come hard. We’ve got a lot of things to try and work on.”

Danville will host Waggener next week.