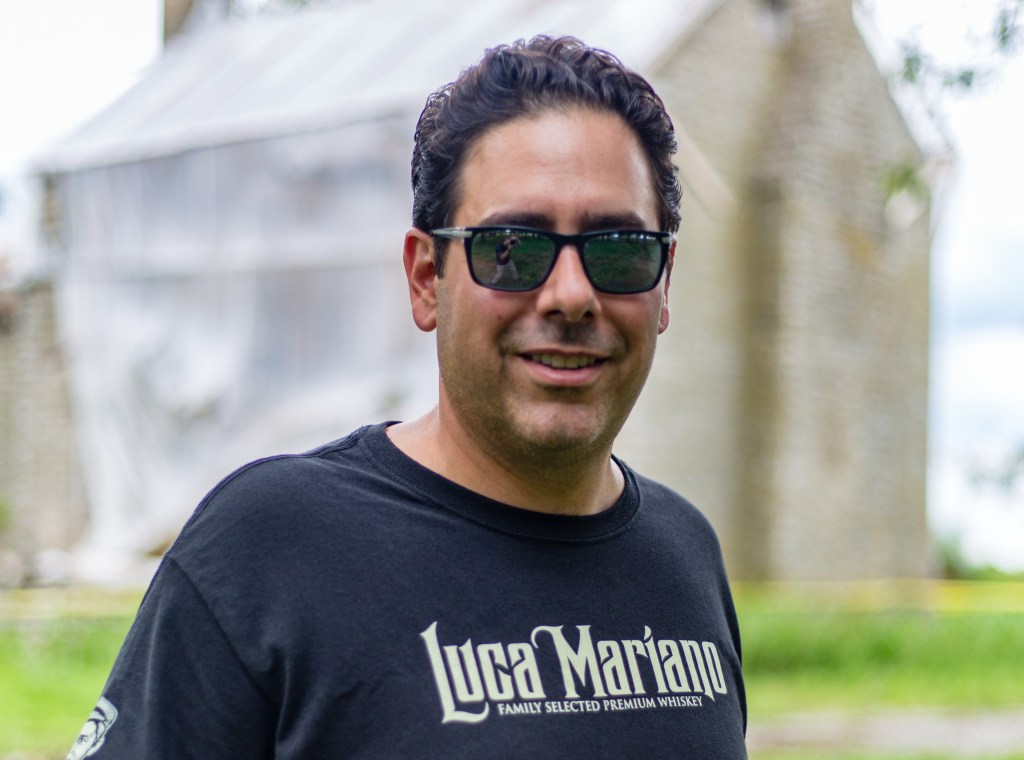 Francesco Viola, owner of the Luca Mariano bourbon brand, stands in front of the historic William Crow House on a farm he hopes to develop into a distillery attraction over the next 12 years. (Photo by Ben Kleppinger)

Francesco Viola’s family has a long-standing tradition of making things themselves. They would grow their own gardens, cook their own food, even distill their own bourbon whiskey.

Viola said despite living in Italy, his grandfather and great-grandfather were both considered “master distillers” of the very American drink.

That distilling gene got passed down to Viola, who would sometimes make bourbon almost casually, as a way to pass the time.

“I had my friends over, was smoking meat, and I got my grandfather’s still out, made some whiskey,” he said. “It was fun.”

It remained a fun hobby until a neighbor told him that hobby was likely illegal.

“I didn’t know it was illegal to distill until 2010. That’s the real reason why I got into the business,” he said. “… I felt the energy pushing me toward getting my license and trying to develop something.”

What he developed over the next three years were five recipes. He did a test launch in Nashville in 2014.

“It was a young whiskey, not aged very long, but in used barrels,” he said. “That went really well. We had a huge success with it. But I wasn’t proud of our product.”

He had a moment of realization when he ordered someone else’s bourbon at an event instead of his own.

“I got tired of drinking the young, green stuff and I went for a proper bourbon,” he said. “I’m like, ‘there’s definitely a problem here.’ … So I decided to regroup and then I talked with Shane and Pat and they started making my product for me.”

Shane and Pat are Shane Baker and Pat Heist with Wilderness Trail Distillery and Ferm Solutions Inc. in Danville. They worked with Viola on his recipes and used their high-tech methods to “take it to the next level,” Viola said.

Viola named his brand Luca Mariano. He plans to release his first bourbons — a straight single-barrel and a rye single-barrel, both distilled and aged at Wilderness Trail — next year. But his plans go well beyond that.

Viola announced last month his intentions to invest between $20 million and $50 million over 12 years in a 240-acre-plus farm on the east side of Danville.

The plan is still pending approval of state financial incentives and a local zone change for the property. Even if every hurdle is cleared, Viola acknowledges his vision for the farm is ambitious: He wants to restore the historic William Crow House on the farm property and turn it into a visitor’s center; add a shopping area and a restaurant; feature live music; construct rickhouses to store his bourbon in as it ages; build a bottling facility and eventually his own distillery; add cabins people can stay in overnight; perhaps even offer fishing and tie the whole area into Boyle County’s expanding network of hiking and biking trails.

“The whole goal is to promote and sell the bourbon, but when people come here, I want it to be a destination where everybody can feel comfortable and enjoy it,” he said. “So we’ll have a little shopping for those that like to shop. We’ll have drinks for people that like to drink. We’ll have a really fantastic restaurant …”

The distillery project is built on the idea of bringing everything “full circle,” said Dan Campbell, a local realtor who is working with Viola.

Much of the farm’s acreage will still be used to grow grains, and those grains will be used to create Luca Mariano bourbon. What’s leftover from producing bourbon — the spent mash — makes fantastic feed for cattle, Viola said. That spent mash could feed cows raised on the farm. And the “Italian-themed” restaurant Viola envisions would use beef from those cows in its dishes.

“That’s really what the state and the federal government are looking for in agriculture,” Campbell said. “They love to see a full-circle operation.”

Viola said he runs other businesses, including Versatrans, a major player in the heat transfer industry, making things like logos to go on T-shirts.

“I tackled that industry and it was fun. I still love it, but this is the next project for us to tackle,” he said. “We’re not trying to do this overnight. There’s a 12-year plan. A lot of the things we’re talking about will happen over 12 years and should be completed by 2030. I want to enjoy it.

“… That’s the plan, to really take my time and enjoy it. With my other businesses, I was working too hard and I didn’t really enjoy it. I didn’t even take many pictures along the way.”

Viola said the first release of his bourbons next year will be from 90 barrels. He wants to begin selling in Michigan, where he’s from; Nashville, where he has many connections; and Kentucky.

“Some people, they think it’s a good idea to run out, and have it be desirable. I don’t believe that. I believe that once I launch in a community … I want to make sure that if somebody orders it, we have the proper inventory to keep filling that demand,” he said. “… I’m hoping to be able to maintain and support those three markets … within the first year.”

After that, Viola wants to take his product back to his family’s home country of Italy.

Is bourbon big in Italy? “Not at all,” he said; it’s more of an untapped market.

“It’s becoming trendier, but I don’t think it’s even in the beginning stages of taking off,” he said. “… I’m not putting all my eggs in that basket. That’s more to honor my family and honor our legacy.”

His family’s story is an important piece of what he wants to do in Boyle County, he said. So are the local stories behind the farm.

The William Crow House, for example, is one of the oldest stone buildings in the area, possibly in the state. It was “built in the early 1780s, after William Crow returned from the Revolutionary War to the large tract of land he had purchased in 1776,” according to Kentucky Urbex, a YouTube channel by Chris Carey, who documents historic structures.

During prohibition, a man named Guy Jones lived on the property. Jones was allegedly a bootlegger who disguised his still in a silo with secret tunnels running to it, according to Campbell.

“There’s a lot of layers of history. We’re going to be different from the other distilleries because there’s multiple stories, multiple layers to who we are,” Viola said. “They’re not all my family’s stories, but they’re not part of my family’s story or part of our distillery story, because their stories were here before us and now we’re including it into our bourbon.”