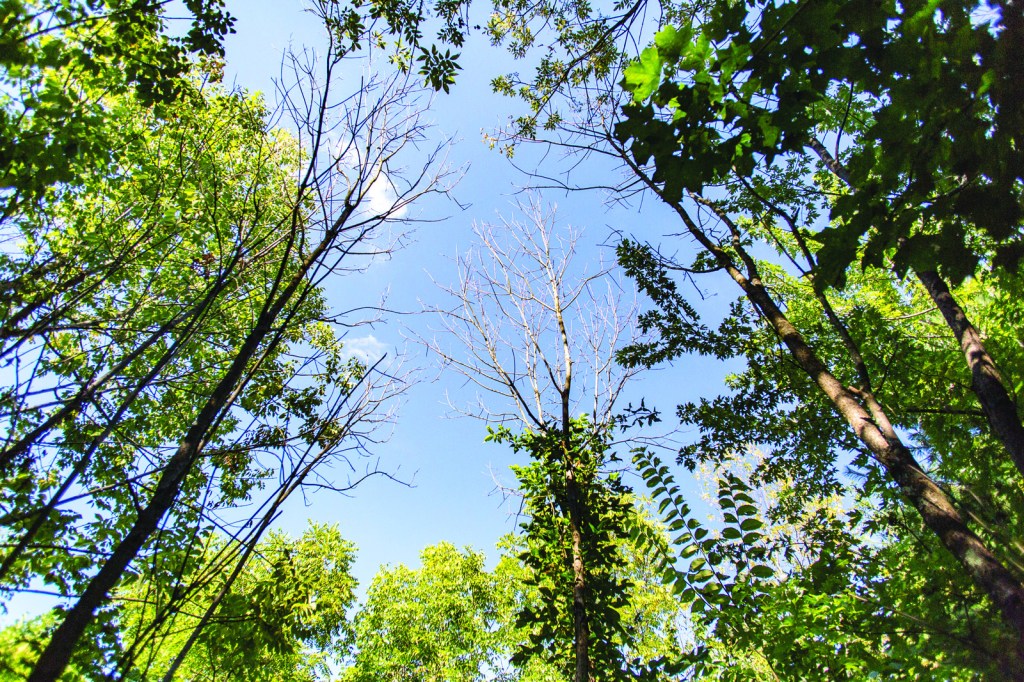 It’s a hot, humid September day in Parksville, but it’s a little cooler in the shade of the forest. Ben Miles walks a narrow path through the 13 acres or so of trees that he helped plant on his parents’ land in western Boyle County when he was just 15 years old.

Up ahead, it gets sunnier — it looks like a clearing in the woods. It’s not just a clearing, Miles explains; it’s a sign. That’s where ash trees used to grow and complete the canopy. Now, their leaves are gone, creating a hole in the ocean of green 30 feet above his head.

It’s not just these half-dozen ashes; it’s not just every ash tree in his forest. The problem is much bigger than that.

“Most ash trees in Boyle County are probably infested now, and many have died,” Miles said.

They’re infested with emerald ash borers, invasive beetles from Asia, known to those familiar with them by the shorthand term “EAB.” 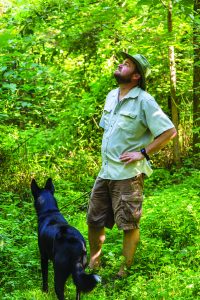 Ben Kleppinger/ben.kleppinger@amnews.com
Ben Miles stands with a dog, Buddy, in a forest he helped plant on his parents’ land in Parksville, and looks up at an ash tree that has died off due to infestation by emerald ash borers.

“The emerald ash borer was first identified in Michigan only back in 2002 and it has been spreading south since then,” said Miles, a Boyle County resident who runs Shire Environmental, a company that has provided environmental project services for numerous organizations, including Louisville Metro Parks, the Bluegrass Land Conservancy and Boyle’s own Central Kentucky Wildlife Refuge. “(The EAB) got to Kentucky in 2009 and has been coming south across the state. I drive to Louisville pretty often and I have watched its damage spread in our direction from up there.”

There’s not much hope for the survival of ash trees in the long-term, Miles said. EABs are ruthlessly efficient in their infestation of ash trees and “mortality of infested ashes is very high, close to 100 percent.”

Ashes aren’t the only trees Kentucky is losing to invasive species.

The eastern hemlock is facing “functional extinction” due to its own problematic insect — the hemlock woolly adelgid, said Austin Williams, hemlock program coordinator for the environmental advocacy group Kentucky Heartwood.

Williams said eastern hemlock trees are a “keystone species” in eastern Kentucky, where they help define the ecosystem. For example, hemlocks provide shade along many creeks with their dense canopies, keeping the water cooler in the summer and warmer in the winter, allowing many other plants and animals to thrive when they otherwise would not, he said. Hemlocks also provide important cover for migratory birds such as warblers and vireos.

“From the fish in the creeks to the birds in the sky, we are likely to see impacts from the loss of these hemlocks,” he said.

How did we get here?

Ashes and hemlocks are not the first American trees to fall prey to insect blights. The American Chestnut was all but killed off decades ago, Williams said; ponderosa and lodgepole pines have been lost in huge numbers out west due to bark beetles, Miles said.

EABs likely made it to the U.S. on wooden packing materials from China, according to the Arbor Day Foundation.

“The bright metallic-green beetle may be smaller than a dime, but it is capable of taking down ash trees thousands of times its size,” according to the foundation. 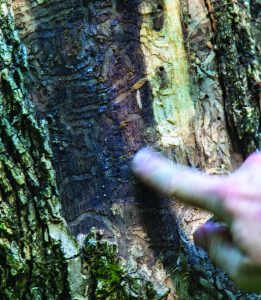 Ben Kleppinger/ben.kleppinger@amnews.com
Ben Miles points out the random-looking trails left under the bark of an ash tree by emerald ash borers.

EABs lay their eggs under the bark of ash trees, and the larvae feed on the tree’s trunk, leaving random, winding paths you can see when the bark is removed, Miles said. When they emerge from the trees, EABs leave distinct, D-shaped holes in trees’ bark.

The feeding of the EAB larvae prevent ash trunks from transporting nutrients; the trees begin to produce fewer leaves and ultimately die after a few years, he said.

Ash trees in Miles’ forest first began showing signs of EAB infestation about three years ago, he said. Last year, the first trees died. This year, there are many dead trees and a few with sparse clumps of green leaves.

It’s difficult to figure out exactly how the hemlock woolly adelgid made it to the U.S., Williams said. But the best guess is that it arrived in Virginia in the 1950s, perhaps on a foreign hemlock tree that someone wanted to put in their yard and show off as an exotic plant. From there, the insect may have lived in even just a single yard for years, until some event allowed it to come into contact with native hemlock trees and it began spreading.

The adelgid was first identified in Kentucky in 2006, according to Kentucky Heartwood.

The adelgid come from Japan, where they feed on native Asian hemlock species. Those trees and the bugs evolved together, so Asian hemlocks can withstand adelgid infestations. But eastern hemlocks have had no chance to develop resistance or resilience to the adelgids, Williams explained.

Once a hemlock tree is infested, it can be killed in as few as four years, according to Kentucky Heartwood.

Hemlocks are dying in large numbers in southern and southeastern Kentucky right now, and the adelgid is expected to continue spreading throughout the hemlocks’ range, Williams said.

“Things are really bad here” in eastern Kentucky, he said. “And they’re moving your way.”

The hemlock’s range includes much of the eastern half of Kentucky, as well as many south-central counties, including Lincoln and Casey counties. 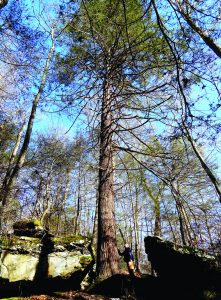 Photo contributed
An eastern hemlock tree growing in eastern Kentucky is seen in decline. Hemlocks are facing “functional extinction” due to the invasive hemlock woolly adelgid, an insect native to Japan.

What can be done?

The outlook is grim for both trees. Miles said ash trees can be protected one at a time with insecticides, but nothing really exists to protect the trees on a large scale.

“These insecticides are not cheap and have to be applied in multiple years, and most of them are powerful neonicotinoids, so there is the concern for those impacts as well,” he said. “You can try to cut and remove the first trees where you see a sign of them, or damaged trees in your woods before you see the EAB, in the hopes of getting ahead of it, but there is such an EAB population in Kentucky already, I don’t think that will be very successful.”

Miles said he got a bid for treating ash trees for one of his company’s clients and the prices for one treatment ranged from about $100 for a 10-inch-diameter tree to more than $300 for a very large tree. “And you’d have to do at least two to three years of that,” he said.

“If you had a really nice one in front of your house, or at a city hall, it could be worth it.”

Prices for protecting eastern hemlocks are substantially lower. Treatments can cost as little as 8 cents for a 4-inch-diameter tree or as much as $2.16 for a very large tree, according to hopeforhemlocks.org, a website being promoted by Williams and Kentucky Heartwood as they work to protect eastern hemlocks.

But even at the more affordable prices, hemlocks aren’t being saved fast enough.

“Approximately 80,000 trees, or about 0.1 percent of Kentucky’s hemlocks, have been treated so far on state and federal lands in the commonwealth,” according to Kentucky Heartwood. “However, shrinking budgets and shifting priorities within the U.S. Forest Service and Kentucky Division of Forestry — the agencies tasked with treating hemlocks on public land — are putting treatment programs at risk.”

Hopeforhemlocksky.org provides information about the hemlock woolly adelgid and the chemical treatments available, as well as fairly detailed instructions for private landowners wanting to protect their hemlocks.

It also explains about efforts to release predator insects, in hopes of controlling adelgid populations.

Insecticides and introduced predators cannot be counted on as long-term solutions, however. Williams said another possible way to save eastern hemlocks could be through genetic modification. If the genes from other hemlocks that help them withstand adelgid infestations could be isolated and then spliced into the genes of an eastern hemlock, it’s may be possible to add that resilience to new eastern hemlocks.

Williams acknowledged insecticides and genetic modification are not ideal.

Hopeforhemlocksky.org also allows visitors to sign up to be volunteers. Williams said there are volunteer days being scheduled over the next few months, when people will be able to help protect hemlocks.

Volunteers won’t handle any chemicals; instead, they will help identify, measure and mark trees so professionals can more quickly apply the correct amount of insecticide to protect each tree, Williams explained. The areas targeted on volunteer days will likely be in the Daniel Boone National Forest, currently the area of most concern.

Miles said as Kentucky loses its hemlocks, something else will fill that empty space — but “whatever takes their place will likely change that habitat type greatly,” and that’s very concerning.

As Kentucky loses its ashes, the future may not be quite as bleak.

Photo contributed
When hemlock woolly adelgids infest an eastern hemlock tree, they lay eggs inside a white, waxy substance, which is visible on the branches in this picture.

“We are blessed with one of the most diverse hardwood forests in the world,” he said. “We’re going to lose our ashes, I’m sorry to say, but we have a great many other species of trees that will be able to take their place and fill in gaps without the heartbreaking sight of whole forests turning to brown sticks without vegetation. Our forests will change, but their diversity will lend resilience to the overall forest.”