Rotary Gets an Update From the Advocate-Messenger Publisher Michael Caldwell is a Rotarian, a past president and a Paul Harris Fellow. He came to the Danville Country Club on Sept. 7 to share with fellow Rotarians what he has learned in his nearly 20 years of working in the newspaper industry. A native of Ashland, Caldwell is currently the publisher of The Advocate-Messenger, Danville Living magazine, and The Interior Journal in Stanford. Caldwell’s Advocate-Messenger position is labeled “interim publisher” because the position requires living in the local area. Having relocated his family to Winchester, with two daughters ages 8 and 10 less than two years ago, he chooses not move again at this time.

Caldwell’s career began as a reporter for the Tribune newspaper in Ironton, Ohio in 2002. In 2006 he became publisher of the Tribune. In 2013 he moved to Niles, Michigan to become publisher/president of Leader Publications which is six community newspapers in southern Michigan and northern Indiana. He returned to Kentucky in 2016 as publisher of the Winchester Sun and Jessamine Journal, a position he continues to hold.

Caldwell stated the newspaper Industry faces challenges, like every business in today’s technology-driven, high rate of change environment. He acknowledged that newspapers must adapt if they are to survive.

Basically the core focus of newspapers has always been to gather and disseminate information in a professional way. He feels that the papers today are doing the basics better than ever. “Are we doing it the same way we use to? Not even close! But we are reaching more people every day, than ever before.” 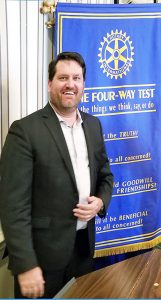 Photo contributed
Mike Caldwell spoke to Rotary members Sept. 7 about his career and challenges faced by the newspaper industry.

As an example of the swiftly changing challenges, The Advocate-Messenger switched to mail delivery in 2017 and last month converted to five days a week editions. As an example of the swiftly changing challenges, Caldwell mentioned the recent imposition of tariffs on Canadian newsprint paper. Prices suddenly increased by 40 percent, from $10,000 per truck load to $14,000 per truck load and The Advocate-Messenger uses about 1.33 truckloads per month. That’s a $5,000 increase in costs per month. “About a week ago the tariffs came off, but prices have not gone down yet.”

Caldwell feels that The Advocate-Messenger needs to focus on what it can do to best serve Danville/Boyle County residents. “Our readers want to know about the new business going in downtown, or what the local politicians are saying, and what else is happening locally. That’s what keeps us relevant.”

All management decisions are made in Danville, not by corporate office. Ultimately, the decisions were made by Caldwell. “That’s what they paid me to do.”

Caldwell considers three things in his decision making process: the bottom-line; the paper’s content, and the community’s interests. The bottom line can’t be avoided because if the bills can’t be paid the paper’s out of business. Converting to mail delivery a year and a half ago was a financial consideration. The money saved is used to provide better content. The weekend edition places emphasis on positive human interest stories by intentionally seeking that kind of content. A broad spectrum of perspectives and voices is sought in the attempt to get the readers to engage in what’s happening in the community. The publisher also stated he is pushing the paper’s staff to get more engaged in the community’s activities. “It’s hard to be a strong voice in the community if your involvement is limited to writing checks.”

Asked about the paper’s circulation, Caldwell said the print edition averages about 4,500 copies daily during the week and spikes to around 5,300 on weekends. In addition there are more than 500 digital only subscribers. Their website gets approximately 4,000 visitors a day and social media brings in over 10,000 visits a day. The social media inquiries are used to drive traffic back to the website.

Questioned about the possibility of adding investigative reporting content, Caldwell said he did not think that would happen (because of cost), but would be doing more in-depth reporting in the “In Focus” series. He responded favorably to the suggestion of inviting public inputs to a focus topic chosen by the editorial staff.