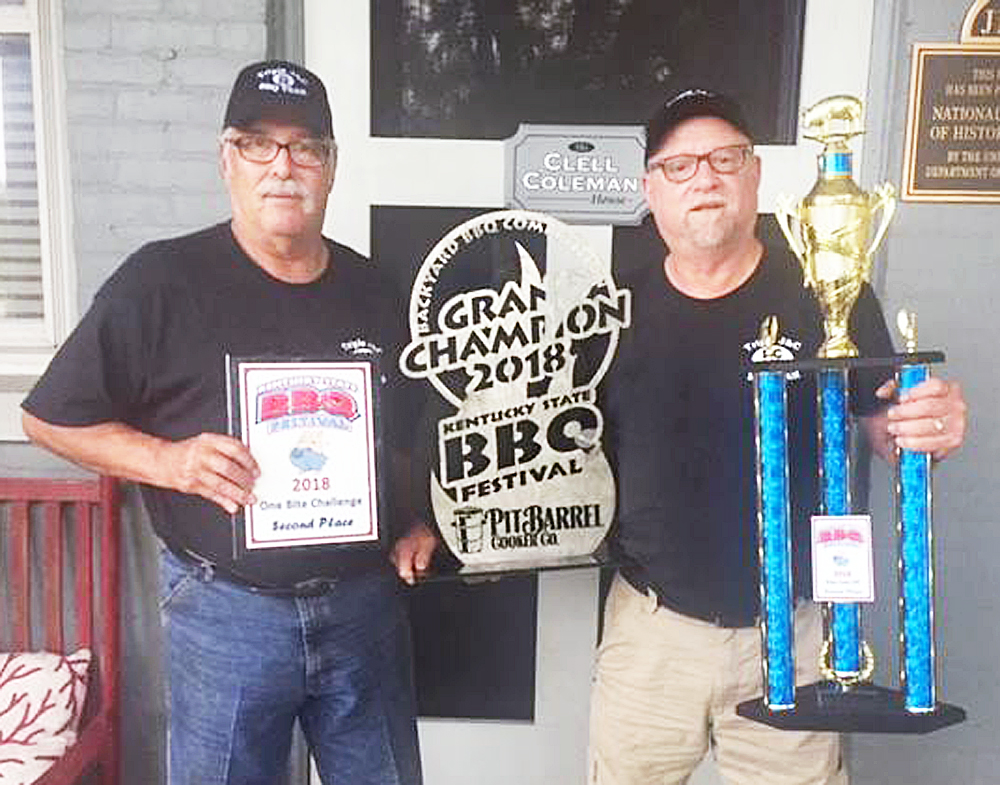 A local barbecue team won its first ever grand championship at the Backyard BBQ competition during the Kentucky State BBQ Festival this past weekend, then immediately had to take shelter from an incoming storm. Triple J&C BBQ with Jack Coleman and Jim Newcom of Harrodsburg won Saturday’s contest, and then had some excitement of a different kind.

“Over beside the stage, Rick Waldon (director of the competition) called out the winners; announced us as grand champion; told us to get our trophies out of the trailer and hit the road! There was a tornado warning coming in from the south,” Coleman said.

Triple J&C BBQ has competed at the festival for several years and have placed second and third in the rib division. Last year, they won first place in the One Bite challenge. “We smoked oysters on the half-shell,” he said. 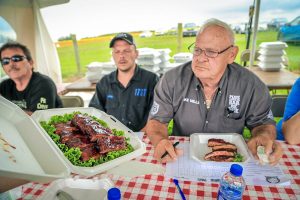 Photo by Brad Simmons
Mike Mills, holder of the most championship wins in professional barbecue and owner of 17th St. BBQ, Murphysboro, Illinois, judges a contestant’s ribs during the Backyard BBQ contest Saturday.

On Saturday, the festival grounds were wet, but the weather didn’t affect their cooking times or temperatures, he said. “I knew we had hit our times and temps for the day and was hoping for a good score.”

Even with having their steak entry only place fourth — perhaps because their beek temperature marker malfunctioned so they had to guess the meat’s internal temperature — they still earned the grand champion title.

Coleman and Newcom have been cooking together for the past 13 years. They began at Harrodsburg’s Fort Harrod Beef Festival, Coleman said. Now they compete in the Kansas City Barbeque Society, the Steak Cookoff Association competition and other Backyard events, Coleman said.

Now, they are catering events and will be at the Jazz Festival in Harrodsburg this weekend.

“We like to do different genres of food,” Coleman said.

Winners of the the Kentucky State BBQ Festival Backyard event were: