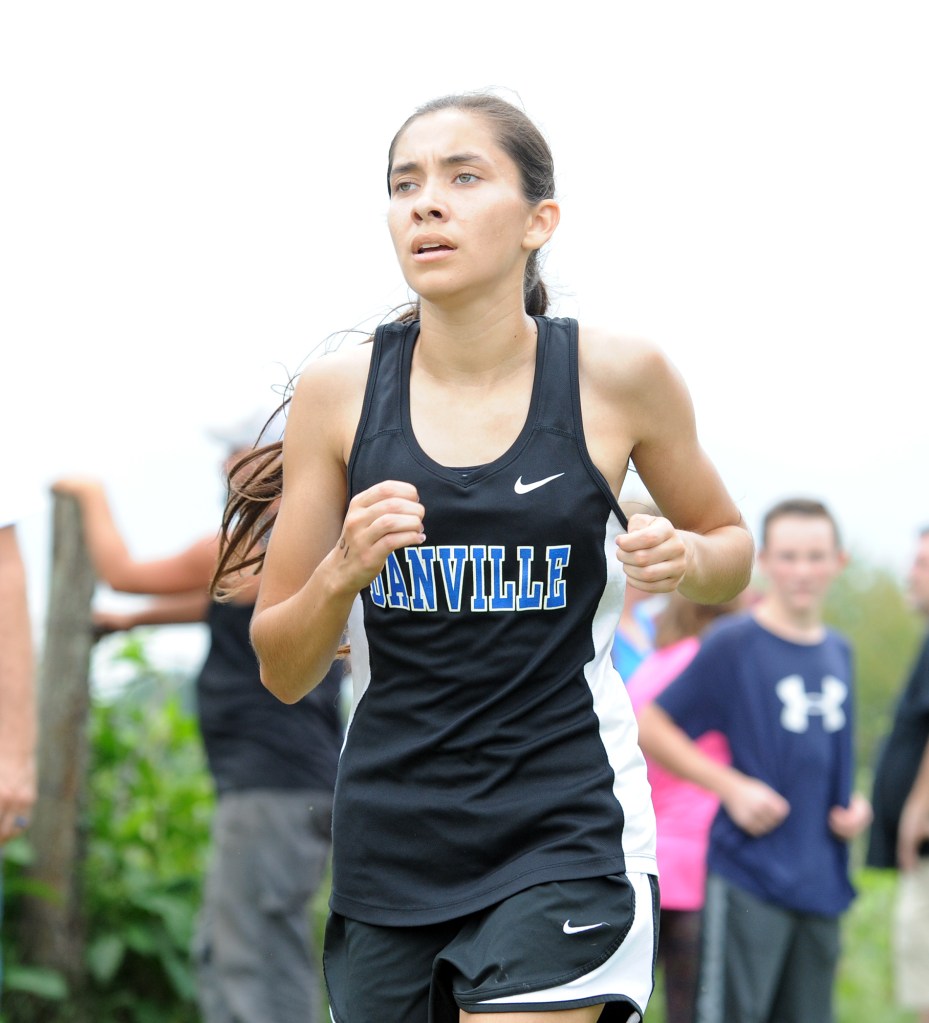 But she’s already the school’s best distance runner, evident in a seventh-place finish at the E.G. Plummer Invitational on Saturday.

She ran a 22:34 on Saturday and has a personal-best time of 21:49 this year. Those numbers have colleges around the state perking their ears up for the senior, who only joined the track team this spring. This fall is her first season with the cross country team.

“I give Lisa a hard time, I try to tell her that part of it is that she doesn’t know what she’s doing. And that’s not a negative,” head coach Chris Verhoven said. “She’s still learning, she learned during track season by us just throwing her in the fire. She’s so competitive, she’s so hard working. Sometimes I think she’s so hard working that she pushes herself almost to injury.”

Voyles wasn’t used to the training during track season — she’s always given 100 percent effort during any kind of sporting event.

And she didn’t start playing sports until her sophomore year.

“I didn’t really start running until junior year,” Voyles said. “That was tennis, that was fun. Then I started playing other sports and I saw that, ‘wow, playing sports is really awesome.’ I have worked really hard, in track I would be dead halfway through the workout and after my legs would be like sand. I was like, ‘is something wrong with me? What’s going on?’ Sometimes I couldn’t stand, I just had to lean on the fence.”

The effort that Voyles gives is exemplary as a senior and makes Verhoven wish he had her for more than just her senior season on the cross-country team. The Admirals have a shot at a region title and a high finish at the state meet this year.

“Despite how quiet she is, she’s got that killer instinct when it comes to being competitive,” Verhoven said. “She’s a perfectionist, she wants to improve her time. She’s a great runner, a great person. She’s always trying to do better and I think that’s why she’s getting some notice from schools. Hopefully that’s going to pan out for her. We just wish we could’ve had her for a couple more years. She didn’t get here till sophomore year and now she’s seen the light that running is better than soccer.”

Aerobic endurance has always been there for Voyles, but not because of running. She’s always been a bike rider.

Since she’s started running with the Admirals (this spring during track and field), she’s been a leader in practice and in meets for the team.

“She has been nothing but consistent,” Verhoven said. “Her time was a little slower (Saturday), that can be chalked up to the course. But she’s been consistent, she’s by far our No. 1 runner. She’s a senior, unfortunately she played soccer but she came out and ran track and realized that running is pretty cool. What’s fun about her is that she’s getting interest from schools in state. I’m trying to make sure they know who she is.”

Voyles has high goals this season for herself and her team. Now that she’s gained college interest, she wants to improve her times and run at the next level.

“I definitely want to improve my time, possibly go under 20,” Voyles said. “We do have some really talented people on our team and I’m rooting for them, hopefully we can place top 10, too. I want to run in college for sure. I wasn’t really expecting that to happen but I’m really glad it did, because it made me realize that I can continue my running career at the next level.”

Verhoven said that Voyles’ story is an inspiring one and it shows that you don’t have to participate in a sport from a young age to excel.

So far this season, it has been Voyles’ effort that has pushed her into the top 10 of every meet she’s ran in this season — fourth (Pulaski County), fourth (Henry Clay) and seventh (Danville).

“When I started doing track and stuff, I didn’t really know that I would be that good,” Voyles said. “I feel like, just because you’re new at something doesn’t mean you can’t be good at it. If you put in your 100 percent best and give it all you have, you’ll get there. That’s kind of what I did. I’m not super talented, I’m not the best and I wasn’t the best when I started. But I feel like I have worked really hard and I give my best effort with everything we do.”