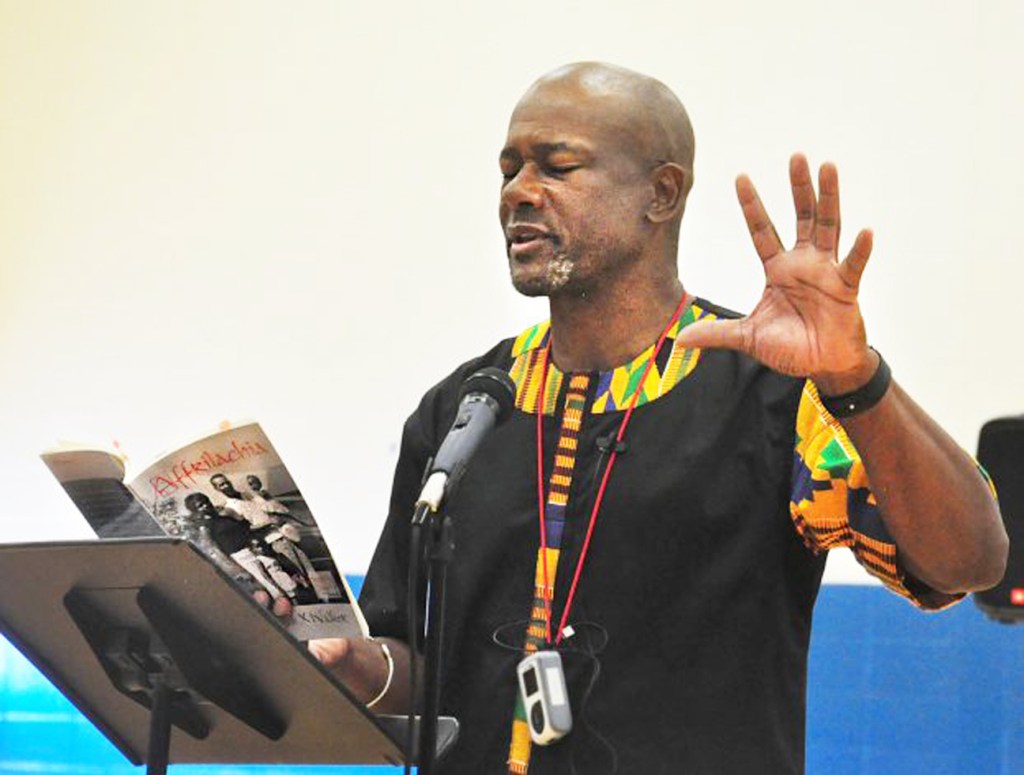 File photo by Robin Hart/robinhart@amnews.com Frank X Walker reads his poem "Red Handed" to school children during last year's Frank X Walker Literary Festival. Before reading the poem, Walker told the students that hands are similar to fingerprints — "hands don't change shape or form." This poem, he explained, shows how his hands got into things while he was young and eventually led him to write. "You learned about me just by hearing that poem," Walker said.

The sixth Frank X Walker Literary Festival will be held Monday-Friday, Sept. 17-21 in Danville with a reading chain for fifth- and eighth-graders in all of the local schools, and a special performance for students and the public on Thursday. Local organization, Citizens Concerned for Human Relations (CCHR) is sponsoring the event.

The festival began five years ago as a celebration of Walker being named the first (and still only) African-American Kentucky Poet Laureate in 2013, said Jane Dewey, director of arts education for Danville Schools.

Walker is an African-American man who grew up in Danville and graduated from Danville High School in 1979. He is a graduate of the University of Kentucky and completed a Masters of Fine Arts at Spalding University. He has lectured, conducted workshops, read poetry and exhibited at more than 300 conferences and universities across the U.S. and abroad.

Walker is a founding member of the Affrilachian Poets and author of four poetry collections, “When Winter Come: the Ascension of York,” “Black Box,” “Buffalo Dance, the journey of York,” and “Affrilachia.” His poems have been converted into a stage production by the UK theatre department, and widely anthologized in numerous collections. He’s also an associate professor at UK in the Department of English.

“We keep the festival alive to honor the work of Frank X Walker and what he’s done,” Dewey said. “Part of that honoring is to focus students’ attention to authors of of color. Great literature isn’t dependent on any one source.” Great writers come in all races, shapes and sizes, she said, and Walker “is a treasure for our community.”

During a phone interview, Walker said he wanted to be a creative writer in high school, but no one encouraged him to pursue his dream. He said a counselor even suggested he join the Army.

“All of the work came from a European tradition,” Walker said of the English classes being taught at DHS at that time. He said only two authors of color were even mentioned.

In college, Walker thought he wanted to be an engineer; then switched to studio art; then he followed his passion and studied English and writing, where he discovered there were many African-American writers he had never heard about.

Walker said he thinks the CCHR in Boyle County is having a good impact on this community. Plus its literary festival is a good way to change perceptions of historical figures and promote understanding of the literary contributions made by people of color, he said.

Being exposed to excellent literature written by African-Americans and authors of color may encourage students to become writers themselves, he said, and other students may gain a deeper understanding and respect for these authors.

As part of the literary festival, two performances of “The Meeting,” a nationally-known one-act play written by Jeff Stetson, will be 9 a.m. Thursday — students in the fifth and eighth grades will attend the show free of charge, and the 7 p.m. show is open to the public. A suggested donation of $5 for adults and $2 for students who attend the evening performance would be very welcome, J.H. Atkins said, CCHH member and festival organizer. And CCHR is trying to raise $2,000 so all students can attend for free.

Atkins said students from Danville and Boyle County schools, as well as from Kentucky School for the Deaf, Danville Christian Academy and Montessori schools have been invited to attend. CCHR decided to invite those particular grades because that’s when they are required to study American history and the civil rights movement.

“The Meeting” imagines what would have happened if Dr. Martin Luther King Jr. and Malcolm X had a chance to meet and discuss civil rights and their philosophies before they were assassinated, three years apart.

“It never happened. What would have happened if they had joined forces?” asked Atkins. He said the play will help students and adults learn more about each of the civil rights leaders and gain a better understanding of their life and times.

Stetson, the writer, has really done a great job in developing the story and play, Atkins said.

Working beside the two experienced actors in the play, Whit Whitaker as MLK and Patrick Mitchell as Malcolm X, Danville Police Chief Tony Gray will be featured as the bodyguard for Malcolm X.

Atkins said he asked Gray be cast as the bodyguard because a lot of the kids and most community members will recognize him, which could give the play more of a community feel.

“He was really excited about it,” Atkins said. And after the first rehearsal the other actors said Gray “was a natural. He’ll be good,” Atkins said.

Gray said he’s never acted before, but has participated in the literacy festival by reading to students in the past few years. Learning his role has been very educational, Gray said. “Just to think how these two gentlemen were working at the same time but had different approaches to deal with the problem (of racism).”

Walker will introduce the play before each show, and afterward lead a discussion about it, as well as visiting several classes on Thursday and Friday to meet and read to students.

“It’s really special to have him come to Danville for two days,” Atkins said.