Silly .5K has serious goal, United Way invites public out to ‘race’ for fun, and for a cause 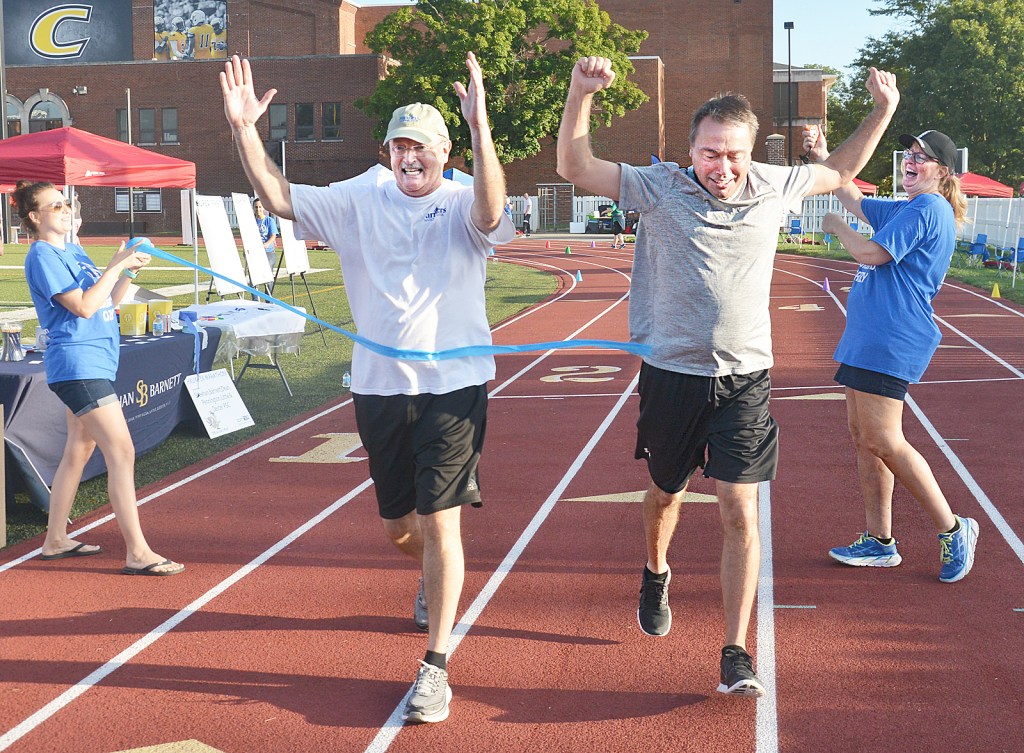 A light-hearted, .5K race — yes, just a quarter of a mile — was held all day Friday for the benefit of the Heart of Kentucky United Way.

As of Friday morning, more than 140 people had registered to walk (overachievers could run) once around the track at Centre College football stadium, raising more than $10,000 said United Way executive director Stephanie Blevins.

“I’m thrilled with the support of the community’s  sponsorships and participants. They know it goes for a good cause,” Blevins said. “It’s a fun event and it’s good for the community.” 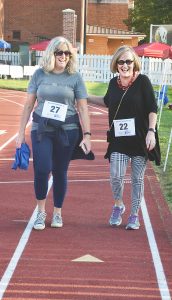 At left, Barb Ayers and Freida Minor begin their treck around the track at Centre College football field Friday morning during the Heart of Kentucky United Way .5K race

The fun part was that everyone could participate in the race and earn a medal. For an extra donation, they could even opt to ride a bike or adult-sized Big-Wheel around the track.

The first people to add their names to the “Super Fast” leader board were Morris and Florann Strevels, boasting times of 15.14 and 20.14 minutes. They happen to be Blevins’ parents, and seemed to be proud to cross the finish line, carrying inflatable torches and sacks full of goodies that were handed by some of the 37 sponsors along the track.

The Strevels can now say they have “run the Flame” at Centre College, which is a popular tradition among students there.

Cliff Ross pinned on his official race number and started off around the track. After finishing a few minutes later, he said, “I think it’s a great idea and a lot of fun.”

At 8 a.m., president and CEO of Ephraim McDowell Health, Daniel McKay, and CEO of Farmers National Bank, Greg Caudill were on hand to fulfill their positions as “pinch runners” for those who had won an online auction purchasing their services to step in and go around the track in the bidders’ place. McKay chose a Big-wheel, Caudill took a bike.

Right before the finish line, both presented cupcakes they had picked up along the way to winners of the auction, who then stepped in to actually cross the line.

Even though everyone seemed to be enjoying the silliness of pretending to take the .5K seriously, the event had a sincere purpose — to raise money for the organization to help people in this community.

In an earlier interview, Blevins said, “All non-profits are experiencing the need to look for new and innovative ways to raise funds. HKUW’s goal is to create opportunities for a good life for all. Funding make this possible.”

Proceeds from the .5K will benefit the Heart of Kentucky United Way, which has invested more than $417,000 to run 39 programs throughout Boyle, Garrard, Lincoln and Mercer counties in 2018. Blevins said 99 cents out of every dollar raised stays in this area, while 1 cent supports international work.

On race day, Blevins said every dollar that doesn’t come in to the HKUW from any of its events or fund drives, “means somebody will go without getting the help they need.”

Cathy Camic of Harrodsburg makes a funny face while posing for a photo after finishing the race.