Admirals back in the win column with victory over Waggener 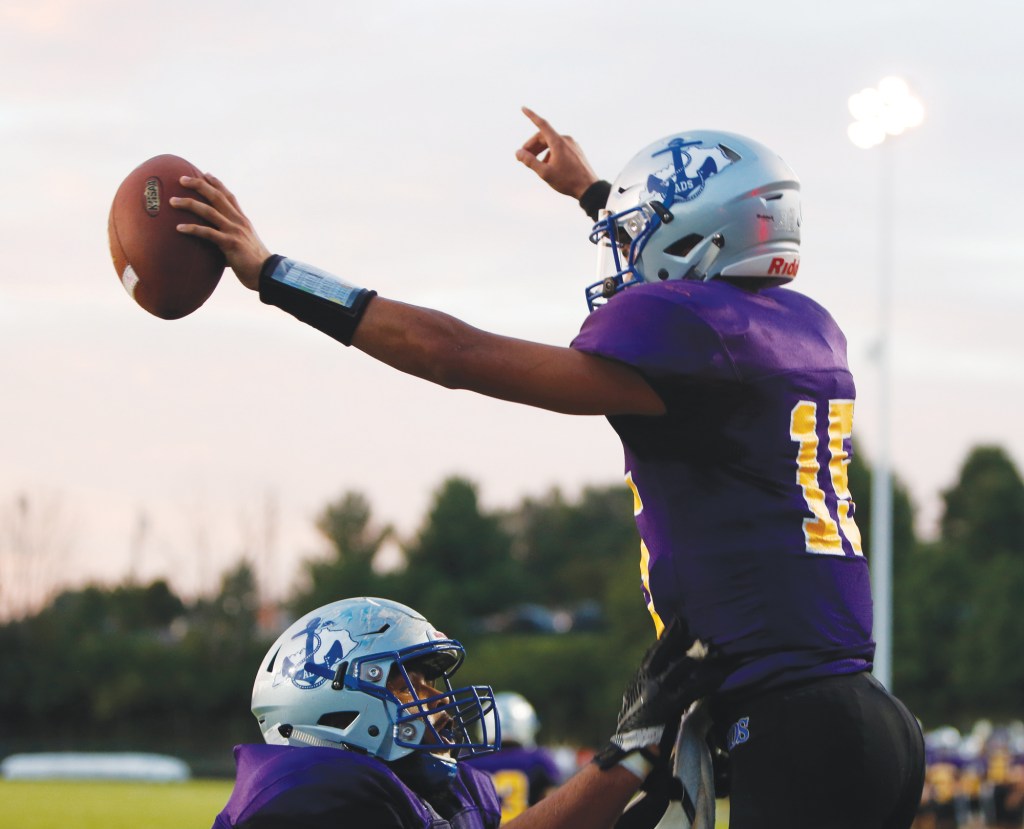 Danville was dominating its game against Waggener on Friday night – until it wasn’t.

The Admirals got the victory they needed to break their longest losing streak in five years, and they got a lesson in intensity as well before they finished off a 30-21 win over Waggener at Admiral Stadium.

Danville faced little opposition from Waggener as it rolled to a 30-0 lead over the first three periods, but the Admirals found themselves in a fight after the Wildcats lit them up three touchdowns in less than six minutes in the fourth quarter.

Still, they got the win they needed to snap a three-game losing streak that came on the heels of a 16-game winning streak and was the longest slide for Danville since it lost consecutive games to Mercer County, Boyle County and Corbin in 2013.

“We talk about these games not meaning as much as far as seeding and playoffs, but you also don’t want to get used to losing,” Danville coach Clay Clevenger said. “They keep score, and you want to make sure that guys are being rewarded for practicing and playing the right way.”

Danville (2-3) did almost everything right through three quarters as it bounced back from its loss a week earlier at Pulaski County. The Admirals scored on six of their first eight possessions and had outgained Waggener 356 yards to 35 when they went up 30-0 in the closing seconds of the third period.

“I was proud of the way we responded. Obviously, we’re not used to losing three in a row around Danville, but I thought our kids handled the week right and handled the game right,” Clevenger said. “Waggener’s a good football team, but I thought we got after them up front on both sides of the football, and that made a big difference in the first three quarters.”

The work the Admirals did in those first three periods secured Clevenger’s 100th career coaching victory. The 1996 Danville graduate went 45-27 in six seasons at Henderson County, and he is 55-18 in six seasons at his alma mater.

The Admirals may also have suffered a critical loss, however, as running back-linebacker Kishown Bartleson suffered an apparent injury to his left elbow during the fourth quarter. Bartleson was taken off the field on a stretcher and was taken to the hospital by ambulance.

“Kishown is one of our leaders on both sides of the football,” Clevenger said. “We’ll just see what the doctors say, and hopefully he hasn’t played his last game of football. I hope he’ll be able to get back.”

Isaiah Miller, who led a balanced Danville rushing attack with 71 yards and one touchdown, said the Admirals’ linemen and backs worked well together to help Danville build its lead.

Five Danville backs combined to rush for 223 yards in the first three periods, and quarterback Zach Thornton completed seven of 12 passes for 123 yards and rushed for two touchdowns.

“We were running the ball hard, staying on blocks and just executing,” Miller said.

Kicker Nathan Hazlett also played a key role in helping the Admirals build their lead by booting a career-high three field goals. Hazlett came within 3 yards of his career-long kick with a 42-yard field goal in the first quarter and had kicks of 33 yards in the second and 37 yards in the third.

Waggener (3-2) kicked Danville around for much of the fourth quarter. The Wildcats lost top rusher Brandon Jones to an injury and pulled starting quarterback Alijah Sickles after he went 1-for-8 with two interceptions, but Marshall Barnes came on to throw for 133 yards and three touchdowns in the fourth quarter.

Waggener scored on a fourth-and-5 play early in the period, stopped Danville in less than two minutes, scored again in just 82 seconds, recovered an onside kick and scored once more to pull within 30-21 with 3:32 to play.

“We thought we had the game over with,” Miller said. “We’ve just to stay positive and keep grinding through all four quarters and not just slack off at the third-quarter mark.”

Clevenger said the Wildcats turned the game into “a scramble drill,” and he said the Admirals didn’t respond well to that.

“Waggener looked impressive on film. I was nervous about this game all week,” he said.

Danville committed its fourth turnover of the game after Waggener’s third touchdown, but an interception by Brennen McGuire with 44 seconds remaining finished off the Wildcats once and for all.