Rebels improve to 5-0 after dominant first half against Collins 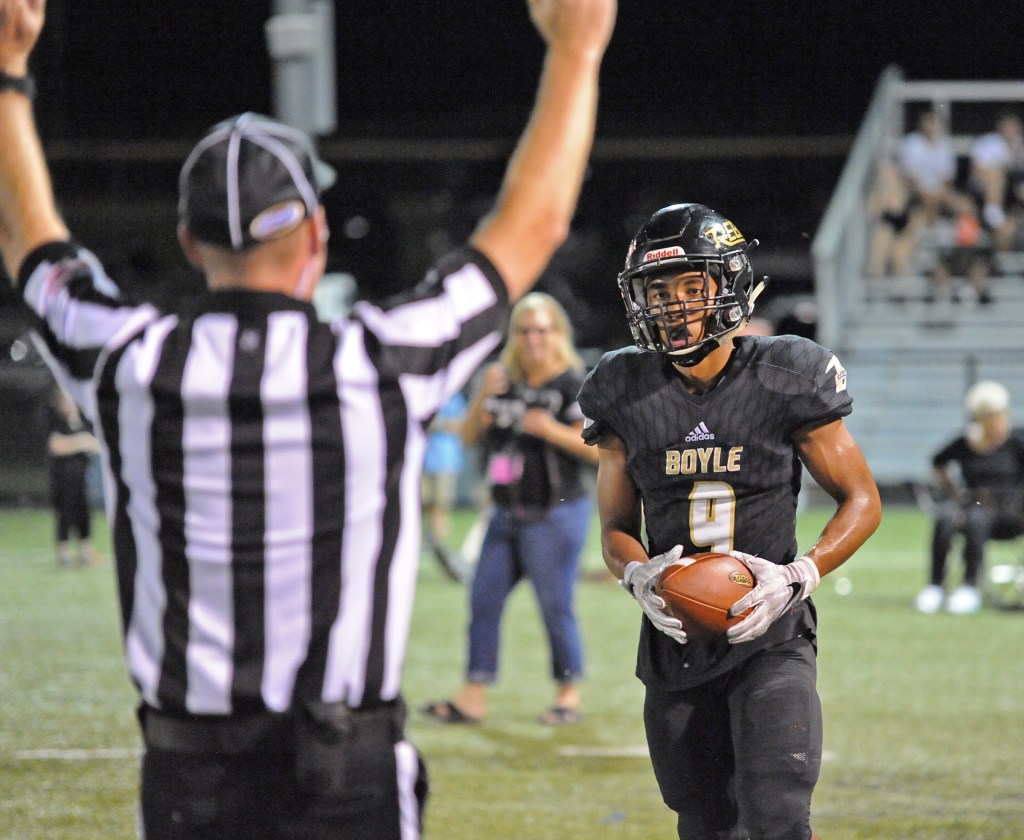 Photo by Hanna Harrison/For the Advocate-Messenger

Collins needed a fast start to hang with Boyle County on Friday.

The Titans didn’t get it.

Boyle jumped out to an early lead and didn’t look back on the way to a 40-13 victory, its fifth-straight win to start the 2018 campaign.

It was a balanced attack for the Rebels, with three touchdowns on the ground and three through the air.

Landen Bartleson kicked the game off with a touchdown on Boyle’s first drive and finished the game with five carries for 49 yards and an interception on defense.

Collins’ first drive finished inside the Boyle 10 yard line thanks to 40 yards of penalties on the Rebels, but the Titans couldn’t get into the end zone.

Luke Sheperson earned his first touchdown of the season on Boyle’s next drive. He caught a 35-yard pass to open the drive and get the Rebels out of the shadow of their own field goal, then quarterback Reed Lanter found him in the middle of the field for a nine-yard score.

It was a hot start for the Rebels, and that was a point of emphasis for head coach Chuck Smith.

“I think that was important because Collins does have some good players on their team, some good linemen and some really good skill people,” coach Smith said. “I thought it was important that we got after them early and didn’t let them have anything to get excited about because it would’ve been a much tighter game if we would’ve.”

Starting kicker Jackson Smith was out due to an injury to his kicking foot, but backup Drew Baker finished the night 4-for-5 on extra points. The miss hit the goal post and bounced out.

Boyle scored two more touchdowns — a pass from Lanter to Reiley Colwick and another Crawford run — to enact the running clock. The Rebels had a 40-0 lead at halftime.

Coach Smith that was thanks to a strong running game: Boyle finished with 217 yards on the ground.

“It looked a lot better,” he said. “We started off doing it, we had a couple of opportunities. I’m anxious to look at the tape to see if it looked as good on tape as it did in person.”

He was also happy with the way his defense settled in, particularly after the penalty-riddled drive to start the game.

“After that first series, they got a lot of yardage on penalties and stuff, after that I think we settled down and stopped them the rest of the night.”

Collins would score twice in the second half when most of Boyle’s starters were out of the game.

Backups have done well for the Rebels this season, and not just in blowouts after the game has been decided. Boyle has relied on players to step up for injured teammates, and that was the same on Friday.

Baker stepped in for Jackson Smith at kicker. Colwick and Sheperson have been instrumental in the passing game with Grant Hotchkiss sidelined.

Reese Smith injured his left hand in the first half against Collins and will likely require a cast. He didn’t play in the second half and had ice wrapped to the back of his hand after halftime.

“Jackson hurt himself yesterday the Thursday before the game which doesn’t make much sense, but it happened,” coach Smith said. “Grant is out for the year, Trent Lanham is out for the year, our starting offensive guard. Then Reese got banged up tonight. Injuries are taking a toll on us.”

But so far, the Rebels have had players to step up.

Boyle County will take its undefeated record to North Hardin next week.