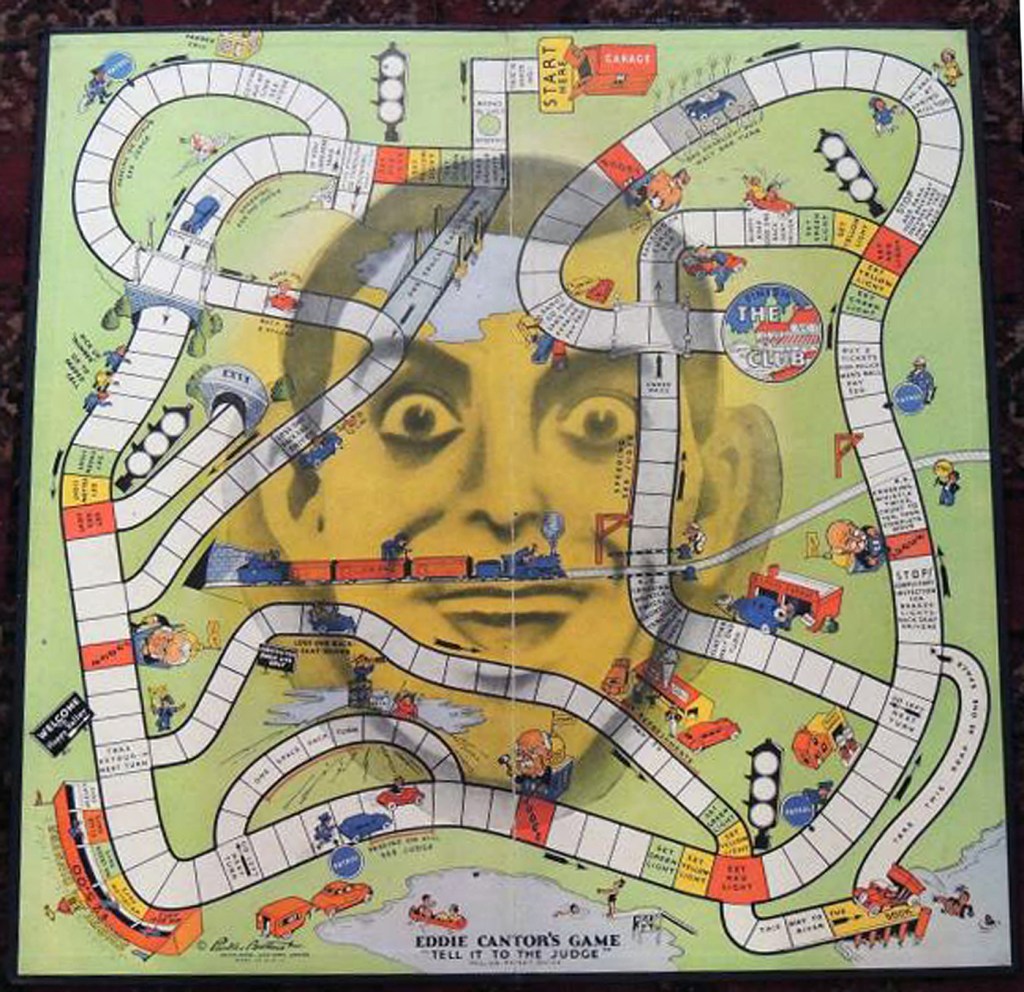 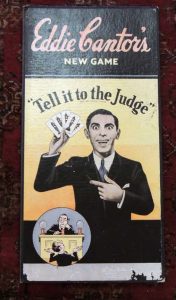 Question: J, I scored this wild game board at a yard sale for a buck. Who is this guy and did I do alright for my major investment? Its size is 20 inches by the square. All I have is the board. It’s in good shape with lots of colors. Thanks.

Answer: Well, this is an interesting one. I knew the name of Eddie Cantor but never knew that he endorsed a game. But it’s not surprising. Honestly, I knew the face first, from the old Looney Tunes that featured his images, occasionally, in its cartoons. Until this question, I thought that he was just some ol’ Hollywood star. Boy, was I wrong when I set out to do some research.

Sadly, the world has all but forgotten this man’s amazing talent, grit and genius.

Eddie Cantor was born Edward Israel Itzkowitz in 1892 in New York City. He was the son of Russian–Jewish immigrants. He had a rough early childhood, having both of his parents die before his second birthday. He was raised by his grandmother Ester Kantrowitz, who gave him her name. It was shortened by a clerk to Kanter, which in time became Cantor.

I’m here to tell you that this guy did it all! His career started out in his early teens as a singing waiter, singing and waiting tables for tips. He made his way onto the Vaudeville circuit in 1907. He went on to Broadway, being in several revues of the Ziegfeld Follies and having his own show in 1923 with Kid Boots. It was at this time he approached and developed his infamous black face character, “Jefferson.” At the same time he was a huge success with the radio. His first radio show was “Time to Smile,” which ran from 1940 – 1946. He was also making and recording phonograph records, as early as 1917, often composing his own songs.

Unlike many stars, he seemed to bounce effortlessly between film, TV and radio. His last film was “The Eddie Cantor Story” in 1953. As if this wasn’t enough, Eddie was also a pioneer in television staring in and hosting numerous shows in the 1950s. He also has had more than 30 biographies written about him, dating from 1928 up to the newest incarnation, “The Eddie Cantor Story: A Jewish Life in Performance in Politics” by David Weinstein in 2018. Eddie Cantor died in Beverly Hills in 1964 Cantor’s success was so widespread that it spurred several promotions, including, but not limited to, sheet music, magazine covers and advertisements for major brands and — a board game.

Your game, “Tell It To The Judge,” was issued by Parker Brothers in 1933. Not even on, BoardGameGeek.com was there much information about this game. Other than the game itself, it had little to do with Eddie Cantor, just his image. I do know that you’re missing numerous pieces and the box. So, it’s basically a decorative piece. There were more results on eBay. It looks like a couple of boards had sold for about $12. So, not a lot of money, but you didn’t loose anything. It’s a cool piece. To quote Paul Harvey, “And now you know the rest of the story.” Thanks for sharing it.