Survey says no to ‘squared anchor’ logo for Danville Schools

Danville Schools A redesigned Danville Schools logo, at right, was largely rejected by respondents to an online survey. Many responses indicated that people liked the rope wrapped around the anchor in the school district’s old logo, at left, Superintendent Tammy Shelton said.

The Danville Board of Education wants a branding committee to go back to the drawing board after hearing the results of a community survey on a redesigned anchor logo.

Out of 296 results from a Google survey, 157 “extremely disliked” a redesigned, “squared” anchor logo that’s been used on the school district’s social media and letterhead for several months, Superintendent Tammy Shelton told board members Monday night. Only 27 said they “extremely liked” the new anchor.

A branding committee was formed this past spring in order to come up with a new logo that could be used districtwide, Shelton said. The “squared anchor” with the stars and the “Danville” name is what was developed. The committee also recommended a new bulldog logo for Bate Middle School, which was developed with input from staff at Bate Middle, Shelton said. 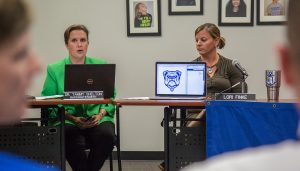 Ben Kleppinger/ben.kleppinger@amnews.com
Danville Board of Education member Lori Finke shows a proposed Bulldog logo for Bate Middle School to the audience during Monday night’s board meeting. At left is Superintendent Tammy Shelton.

Board members seemed to like the bulldog, but the anchor was a different matter.

“I’m fine with the bulldog. I think there still needs to be discussion of the anchor,” board Chair Paige Matthews said.

The committee recommended to the board that the new squared anchor be approved for use at the district central office and on the webpage, but that it not be used in other areas such as for athletic teams.

Board members said given the survey results, they didn’t feel comfortable approving use of the new anchor. Board member Steve Becker said he believed the rebranding project was intended to come up with a single logo that could be used districtwide. He said he’s also a fan of the traditional logo, an anchor with a rope wrapped around it, which was developed in the early 2000s.

“I think the anchor represents to a lot of folks a big part of our tradition,” Becker said. “And I’m not so sure changing that is a good thing to be doing right now. … That’s me — I’m an old guy.”

Shelton said many of the comments received with the survey results stated that people liked the rope included with the old logo and wanted to keep it.

Shelton said there’s no cost difference to the district at this point in keeping the new logo or not. The district put the logo on a temporary banner outside Hogsett Primary School, but that has no cost going forward. The district also paid someone to develop the new logo, she said.

Board member Lori Finke said she would like to ask the committee to come up with a new single logo that could be used districtwide. The board discussed the fact that many different clubs, groups and programs in the Danville school district have altered logos with different things in them. Shelton wondered if the board wanted the committee to come up with a single anchor logo that could be put on top of different backgrounds.

“I thought the point was we wanted to have one identifiable brand,” Becker said. “And it’s hard for everybody to change. I know there are still anchors out there that are really different. But if we’re going to go for one, then we need to say that’s our mission, our goal.”

Shelton said she would go back to the committee with the board’s request. The board took no formal action concerning the anchor or the bulldog logos.